They don't do politics, do they? 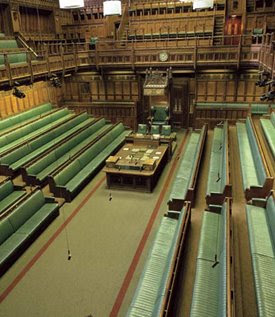 My colleague Booker, with more years than he can remember slaving behind a pen and then, latterly, a laptop, producing his columns, tells me that, for something to sink in to the public consciousness, it must be repeated many times.

It is easy to fall into the trap of believing that, because you happen to have written your golden words and had them published somewhere, the whole world is going to stand back and applaud, recognising instantly the profound truth of your wisdom, and immediately change its ways.

Hence, by way of repetition, but in a different context, we return to the theme of politics, to observe once again that the problem with modern politicians – and the political claques – is that they don't do politics any more. They have made the fatal mistake of confusing the soap opera of political lives with real politics, which is about policies and choices which affect ordinary peoples' lives.

Thus, it is interesting to note that, while we write from the ghetto of this blog about the Army's need for mine protected vehicles with decent off-road performance, this is treated by our politicians and their groupies as an arcane, specialist issue – best left to the techies, while they get on with real politics.

Back in the USA, however, this question is a hot political number, not least because Congress is shortly going to be asked – at a time of extreme financial stress – to authorise the expenditure of $6.5 billion on yet another new fleet of trucks for the Army and Marines, designed specifically to offer off-road performance and protection.

That is the real stuff of politics, where democratically-elected officials are going to be asked to make a decision which will have an effect on thousands of lives, directly and indirectly. If the right choice is made, it will mean that a great many people who would otherwise have died will live. It may also – as happened in Iraq – have a direct influence on whether the military campaign in Afghanistan is successful, if only on the basis that the campaign will become politically unsustainable if casualties continue to rise.

By contrast with the US, however, in the UK, this intensely political and strongly argued issue has been ignored by the political classes. In fact, the decision has already been taken. We do not know exactly when it was taken, by whom, what precise factors were considered and what influences were at play.

We do know, however, that the British authorities made a different decision. Wrongly – as the Americans are now demonstrating – they took the view that troop protection and off-road performance were mutually incompatible, to the extent that they were impossible to achieve in one vehicle.

As a result, the Army went down the path of having one set of protected vehicles – for on-road use – and another set, very lightly armoured – and extremely expensive - optimised for off-road use.

Other than the procurement minister and the secretary of state, no elected representatives were involved in the decision. Individual MPs were not consulted, there was never a debate in the House, and the Commons Select Committee did not involve itself in a debate. It was confined to very narrow – and ill-informed – circles within the MoD and the military.

What we do see, however, is the result of that decision, as in The Daily Telegraph today. This reports that five soldiers have so far been killed in the machine they call the Jackal – the fruit of the Army's political decision, taken without input from Parliament or the political claques.

Actually, the correct number is six soldiers killed, in four separate incidents, plus an Afghani interpreter who also lost his life – seven killed as a result of a political decision not made by politicians. Furthermore, there are an unknown number of incidents – almost certainly higher – where vehicles have been destroyed or damaged by explosions, and many more have been injured.

Given that these vehicles have only been in service only for six months – in the less active campaigning season – and that there are (or were) only just over a 100 in service, this is an extraordinarily high casualty rate. The rate is even higher if you take into account the strikes where troops were injured - which are not reported by the MoD.

The reason is not hard to find. The Jackal was and is – as Thomas Harding's piece points out, using this blogger as a source - a vehicle which breaks every rule in the book when it comes to mine protection. All credit to The Daily Telegraph for publishing such a political piece, which is already having the MoD reacting sharply.

Harding also quotes a serving officer – anonymous for obvious reasons – who says that the "fatal mistake" was turning the Jackal into a patrol vehicle which meant "we are now the target". He adds: "It was an ideal vehicle for Special Forces but it has been pressed into service for totally inappropriate use."

And, as we have chronicled on this blog, this officer then tells us: "Then they have tried chucking on more armour to make it safer but it simply cannot work and now the Taliban have learned how to penetrate that armour." He concludes: "Mobility is no longer a protection if you become predictable by using roads which is what we are doing."

These are not complex technical issues. MPs daily deal with far more complex matters. This is abn argument about mobility and protection. If troops are to die because of political decisions, then those decisions should be made by politicians rather than faceless bureaucrats, or ministers secretly advised by the same.

Preferably, we should have a system as in the US, where the funding for major procurement decisions has to be approved by Congress. That way, decisions are given at least some democratic oversight before they are made. It does not necessarily make for better decisions – although in vehicle purchasing it has – but at least then the decisions are made by people who are democratically accountable.

Failing that, there are still mechanisms for scrutiny available to our Parliament. Individual MPs can ask questions and put in for debates in Westminster Hall. We have tried those but they do not really have the impact.

We need the "big hitters" of the opposition front bench either to call for a debate, or allocate an "opposition day" for a debate. In addition, we could see a Commons Defence Committee inquiry into the issue – which would still be highly relevant, as the MoD is compounding the error, not only by buying more Jackals, but also support vehicles of similar design.

Any or all of these should be concerned with the political question of whether the Army is right to sacrifice the lives of our troops (men and women) in their flawed quest for "mobility" rather than protection when all the evidence indicates that they can have both. Even if the Army thinks otherwise, it should be called to give account of why it has made this choice, before more die.

And, if there was any further reason needed, this is the second attempt the Army has made to bring a "protected" vehicle into service. The last one – the Pinzgauer Vector – was just as much a disaster, and the decision to buy that has not been properly scrutinised. Then, of course, there is the Viking. The evidence suggests, therefore, that unless and until the Army/MoD is brought to account, they will keep on making the same mistakes.

The problem though – as we indicated – is that this is not seen as a political issue. The politicians and the claque have indeed retreated from politics. They leave they real decisions to the bureaucrats (in and out of uniform), while they play their games. And that, I would venture to suggest, is one of the reasons for the contemporary disillusionment with what passes for politics.

The problem is that politicians are no longer interested in such decisions any more. And people are not interested in their game-playing. Not until the politicians wake up and remember what they are there for – real politics - will we take any interest in them.