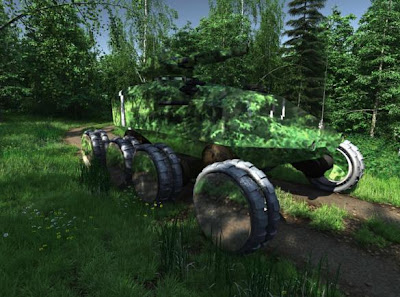 One senses a "spoiler" here, a high-tech extravaganza by the MoD, timed just after the Defence Committee report on equipment. It's certainly getting more publicity than the report, which tells you something about the media.

So, we have an Army driving around in 35-year-old light tanks – older than most of their crews – and 17-year-old Snatch Land Rovers – while unable to find a suitable protected patrol vehicle. This is the same Army that has taken 20 years and spent over £300 million on not buying a medium-weight armoured vehicle.

But, rather than address real-world issues, the MoD is prattling on about "the front line in the wars of the future." This, we are told, "will be machines":

A massive, unmanned air force will scour the skies over a city, while robots will patrol the streets, quickly discriminating between an enemy carrying a gun and a civilian carrying a child. Only then will human beings arrive, protected by fast armoured vehicles that are half the weight of today's tanks but just as strong and ground troops who will have robot mules carrying their equipment for them…

And so it drivels on. Amazingly, we are told, the MoD hopes to have working versions of these ideas in the next 5 to 10 years.

It would be nice to think that the MoD could summons up enough energy and brainpower to find a replacement for the Snatch Land Rover in the next 5 to 10 years. Obviously, though, that is far too difficult. It is much easier to indulge in these cosy little fantasies.