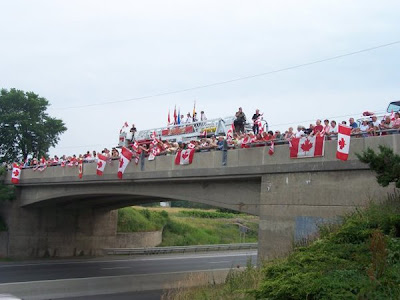 As parades of soldiers returning from operations become part of the everyday fabric of life, we received a moving note drawing attention to a blog which records the spontaneous demonstrations of appreciation in Canada when their war dead are repatriated.

The spontaneity of what is called the "Highway of Heroes" is impressive, although we did express our reservations by return of e-mail. While the sentiment is admirable, it could be argued that this is playing into the hands of the enemy.

The metric of success for the Taleban in this war is dead soldiers. They adjust their tactics to create as many casualties as they can, and then monitor publicity. The more they get, the more they kill Therefore, one wonders whether the very natural expressions could do more harm than good.

We also drew attention to the non-combat casualties out of theatre. Parents of children who have been killed by that means are sometimes rather hurt that there are such public displays for those who fall in theatre, yet their sons' deaths are disregarded - somehow as if they were "second class" deaths.

Inevitably, this is an emotive and difficult issue, but one also has a further concern that we sometimes spend too much effort honouring the dead and too little getting angry about how they died, when so many are killed unnecessarily. Speaking personally, I would prefer that we also focused our energy on keeping soldiers alive and uninjured.

The response to this, by return of e-mail, was that my sentiments are very close to those of General Vance, the Canadian commander in Afghanistan. Nevertheless, I was assured that the Highway of Heroes is considered a great tribute, although it was acknowledged that, if taken out of context, it can work to demoralise the population.

However, the effect on the Canadian population is to cement support. Canadians, we are told, don't like to lose, and quitting after taking losses would not sit well with many. Even though polls show Canadians split on the mission, if the Quebec French population is removed from polling, a good majority of Canadians in fact support the mission in Afghanistan.

For example, if a group of protestors were to disrupt a homecoming as happened recently in the UK, they would have been assaulted and driven off. "Our anti-war peacenik types know to stay away during shows of support for the military," writes our correspondent. Canucks tend to get more than vocal when their soldiers are besmirched.

Interestingly, the experience in North America in general has been that open shows of support and honour of war dead greatly increases recruiting success and support for missions. In some ways it's counter-intuitive, and something that military people themselves don't often understand. The view is that, when it comes to garnering support, military people are usually the most ham-fisted.

On the issue of how soldiers die, Canada has lost many soldiers simply because of the chronic helicopter shortage. But in other respects Canada has moved greatly to improve the equipment in which her soldiers ride and fly. The Canadians will leave Afghanistan a vastly improved force.

Having said that, adds our correspondent, "I don't think anybody adapts and improves as fast as the Americans. I admire America greatly for this."

There is considerable food for thought here. Where there are ritual expressions of condolences from politicians and others which are a substitute for action, as if expressing sorry for a death that could have been prevented somehow expiates the guilt, I find this offensive. But the spontaneous "Highway of Heroes" is something else. It is indicative of a society that still has values. There is hope for us yet.