The abolition of "defeat" 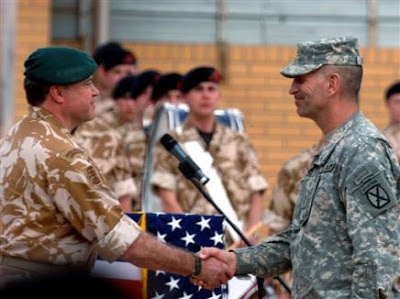 Another landmark in the British defeat in southern Iraq was reached today when Major General Andy Salmon, of the Royal Marines, formally handed command in Basra to his US Army counterpart Major General Michael Oates.

With that, the Royal Marine flag was lowered for the last time at Basra Air Station, when the flag of the US 10th Mountain Division was raised to replace the Marines’ colours.

The symbolism of this has been entirely lost on the commentators, but it was elements of the 10th Mountain Division which assisted the Iraqi Army in the recovery of al Amarah last June in operation Promise of Peace, after it had been abandoned by the British Army in August 2006, thus leaving the Mahdi Army free rein to turn the city into the bomb-making centre for the rest of the Shi'a insurgency.

Despite this senior British generals are celebrating the "enormous success" of UK troops in Iraq, having coined yet another term for "retreat". Such is the language of propaganda that the earlier retreats from al Amarah and then central Basra became "tactical moves" while the retreat from Basra Palace became a "repositioning". But the spin doctors have excelled themselves today, describing the current humiliating hand-over to the Americans, as a "Change in coalition command structure in southern Iraq".

If only Lt-Gen Percival had been so agile with terminology in February 1942, he would perhaps have gained his knighthood instead of ignominy, and gone on to greater things.

Certainly, the Orwellian decay of the language does not allow for the use of the words "surrender" or "defeat". We have achieved a glorious "change in coalition command structure" and now our troops can be "repositioned" elsewhere, where they can repeat the process all over again. Now that the word "defeat” has been abolished, there can be no stopping them.