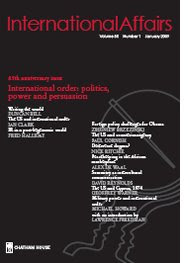 If you have a powerful, petrol-driven chainsaw, and sundry matching accoutrements, you would be adequately equipped to become a lumberjack. Few would suggest, however, that you could use the same toolkit for computer repairs, even if the end result of any such attempt might afford momentary satisfaction.

From such an example comes the blindingly obvious truism that you must have the right tools to do the job – and, of course, the corollary, that without the tools the job simply cannot be done.

Less obviously, what applies on the scale of cutting down trees also applies to the execution of grand strategy and policy – those two words sometimes being used interchangeably. Without the tools, the strategy cannot be implemented. And no more so does this apply to the ultimate expression of foreign policy, the use of military power.

To offer but one scenario – there is a case to be made that to resolve the increasingly ghastly situation in Zimbabwe, a military invasion and occupation would be an effective answer. Thus, apparently, was seriously considered by Tony Blair, only for him to be dissuaded from carrying out such a venture. The military capacity simply did not exist.

Thus we see a relationship. The strategy calls upon certain tools for its execution but, in the absence of the necessary tools, the strategy cannot succeed. There is no point even considering it. To that extent, a strategy can be – and often is - defined not by the broader political considerations, or any other issues, but by the availability of the tools to do the job. The tail, in that sense, wags the dog.

These points are so simplistic and obvious as barely to warrant re-stating, yet they lie at the very heart of a major debate raging in political, military and academic establishments. Yet it is a debate that is barely recognised outside these very tightly drawn circles. Where elements do emerge into the public domain, they are often misrepresented and misunderstood.

This brings us to the paper, published today by the foreign policy think-tank Chatham House in its journal International Affairs. It is called, "Blair's wars and Brown's budgets: from Strategic Defence Review to strategic decay in less than a decade." The authors are Dr Paul Cornish, Head of the International Security Programme at Chatham House, and Dr Andrew Dorman, an Associate Fellow at Chatham House and a Senior Lecturer in the Defence Studies Department, King's College London.

Going right to the heart of their argument, they assert that defence policy, planning and analysis in the United Kingdom has reached "a state of organisational, bureaucratic and intellectual decay." They have thus come to the worrying conclusion that British defence is

That comes at the very end of a fifteen-page, closely argued paper, preceding which the authors note that calls for a defence review are being heard ever more loudly and frequently. This is very much the Conservative line, with the expectation that strategic priorities will be set and robust spending plans designed accordingly.

But, say Cornish and Dorman, even in the best of times a defence review is an extremely difficult matter of satisfying competing economic and political imperatives. The political climate in 2009/2010 is hardly likely to be conducive to a carefully considered, full-scale review of Britain's defence policy and strategy.

They are almost certainly right there. A review is a process rather than an end, and the nature of the findings depend entirely on the terms of reference, the political realities and the judgement of the writers as to where the priorities lie.

The authors, however, also point to other issues which could fatally weaken the utility of a review. They argue that the continuing downsizing of the Ministry of Defence, its loss of corporate memory and the weakening of the policy community - both within the MoD and in the wider think-tank/academic/policy analyst environment - suggests that even if the government did choose to proceed with a full-scale defence review, it is not at all clear that it could be conducted with much success.

Again, they might be right. But one also has to venture that they are missing the very point they, themselves make in their own admirable work. Their key passage comes on page 9 – more than halfway through the paper – where they observe that, "In a number of respects, the military component of UK defence policy is beginning to appear rather frayed." They then go on to pose the key question, the importance of which cannot be over-emphasised. "There is, first, the question," they write, "of what type of armed forces the UK needs."

Here, Cornish and Dorman call in aid General Sir Richard Dannatt, Chief of the General Staff. In June 2008, they tell us, he outlined the future direction of the "land environment" to 2018. And, at the heart of his remarks was a quandary over the role of the military and the future of conflict.

It is that "quandary" which explains why defence policy is such a mess. In the paper we are told that it is widely understood within the Army in terms of a tension between those who support General Sir Rupert Smith's "war among the people" thesis (and therefore see the future for western armies as one of stabilization and counterinsurgency operations such as those in Iraq and Afghanistan) and those who support Professor Colin Gray's argument that the current period is untypical, with the implication that traditional state-versus-state conflict could or will return.

In many ways, we are then told:

… Dannatt was trying to appeal to both schools of thought by presenting a framework which would encompass both possibilities. However, the British army remains divided on this issue since it is inconceivable that both types of military structure and doctrine could be supported and sustained given the current intensity of operations and level of resources.

There you have it in a nutshell: "it is inconceivable that both types of military structure and doctrine could be supported and sustained given the current intensity of operations and level of resources." In other words, we can have an Army designed for and capable of dealing with a "war among the people" – the type of war we are currently fighting - or we can have one prepared to deal with the "traditional state-versus-state conflict", the "future war". But we cannot have both.

Dannatt's mistake – if it can be called that – has been in trying to achieve the impossible, attempting to build an Army which can do both, within the limits imposed on him. This simply cannot be done and it was fruitless ever attempting it. Not even with double the resources would it have been possible. Thus he was in a position of failing to do either properly. The (potential) consequences are spelt out by Cornish and Dorman who note:

The risk is that these different pressures might combine to result in Britain's armed forces being defeated in combat - as some commentators have argued has already happened, in Musa Qala in 2006 and Basra in 2007. Worse still, perhaps, Britain's armed forces might become so exhausted that they cease effectively to be functioning entities and will be unable to meet the next challenge that confronts them.

If there is blame to be laid at Dannat's door, it is in his failure to convince politicians that the two roles are wholly incompatible. Furthermore, he needed to tell them that they could not be achieved without massive additional spending, which was neither politically nor economically feasible.

Equally, he has failed to make that case openly, in public, despite having made numerous high-profile statements on the state of the Army. It is not clear, however, from those statements, that he himself fully understands the degree of incompatibility between the roles – hence his advocacy of FRES as a multi-purpose asset which could be employed for both counter-insurgency and the "future war". The indications are that he believed he could "square the circle".

On the other hand, the choice of whether we dedicate our Armed Forces to one role or the other should not rest with a lowly Chief of the General Staff. This is a decision which lies in the realms of high policy and is thus for the politicians to make. And it is here that the essential failure lies. The decision simply has not been made, leaving the military to muddle on, trying to make the best use of their resources in an endeavour which cannot succeed.

Cornish and Dorman usefully discuss this, referring to "declaratory policy" – the policy the politicians actually claim as their intent. They then note that the defence policy framework that has emerged has not "kept pace with commitments and events." What they do not point out as clearly as they might though is that, since the original policy formulation which started with the Strategic Defence Review of 1998 and continued through to the second White Paper in 2004, more than defence policy has changed. In terms of operations in Iraq and Afghanistan, the Armed Forces have undergone a transformation, to bring them into line with real policy.

Gradually, through a series of ad hoc changes, mostly achieved through incremental re-equipment via the Urgent Operational Requirement (UOR) system, the Armed Forces – and especially the Army – is adapting to deal with current operations, equipping to fight the "war among the people". Yet, in tune with headline "declaratory policy", there is still an expectation that the Armed Forces will continue to equip and prepare for the "traditional state-versus-state conflict", in line with the "declaratory policy".

The choices, in essence, can be simply stated. On the one hand, there is the prospect of continuing with the pretence that we are still a major power and can maintain an all-purpose military capability which can deal with the entire range of conflicts that might possibly arise. One the other hand, there is the reality of equipping and structuring our forces successfully to deal with known commitments, to the exclusion of any more grandiose ambitions. With whatever home defence component might be needed, and a limited capability to engage in discretionary operations, that is the extent of the second option.

The fact is that we have to make the choice. The underlying problem is that the need to make a choice has not been presented in a coherent way. By and large, the public and the wider political community are not even aware of the issues.

Thus, we continue to hear complaints of "overstretch" and "underfunding", with the concomitant pleas for more funding. But there is no realisation that no amount of additional funding which could reasonably be expected will solve the problem. The issue is that the Armed Forces are having to cope with mutually incompatible roles. Since we cannot (or will not) afford both, we have to decide on what we can reasonably afford to do – and are prepared to do – and then shape our Armed Forces to deliver them effectively, thus fashioning the right tool to do the jobs.

For all its merits, the paper produced by Cornish and Dorman does not make this entirely clear. It does, however, add usefully to the debate, but it is a debate that needs wider exposure. This, it shows no sign yet of doing. We live more in hope than expectation that it will.