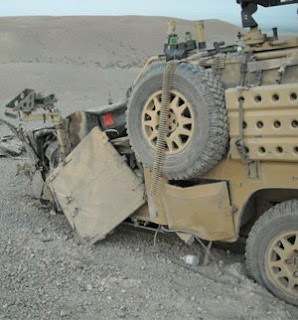 Two offerings in the Sundays on the continuing discussion of Mr Cameron's loss make an interesting contrast. One is from Matthew d'Ancona in The Sunday Telegraph and the other is from Peter Hitchens in The Mail on Sunday.

I will not trouble you with the former, other than to note that its vacuous drivel serves only as a counterpoint to the robust and sensible piece from Hitchens, who absolutely and completely gets the point. He writes that was "struck by the coincidence" between the death of Ivan Cameron and the four soldiers killed in Afghanistan. He then writes:

Three were of soldiers killed in Afghanistan by yet another roadside bomb, from which they were not properly protected by the inadequate, cheapskate vehicle in which they were travelling. They were Corporal Tom Gaden, Lance Corporal Paul Upton and Rifleman Jamie Gunn. The fourth was that of a Royal Marine, Michael Laski, who died in a Birmingham hospital from wounds sustained in Afghanistan on Monday.

That means deaths in this vainglorious, ill-considered episode have reached 149, a shameful number killed because they were inadequately equipped. No, these were not small children, but they were much-loved sons, fathers, husbands, and brothers. Their deaths have all left sad gaps in previously happy lives.

The fate of every one of these was directly in the hands of the MPs who adjourned on Wednesday. Yet I cannot remember when they last attempted a proper debate on what our soldiers are doing in Afghanistan, or when anyone on either front bench said anything truthful on the subject. None can explain why we have soldiers there at all. They come up instead with silly slogans, free of thought.

And even if our MPs are too busy claiming second-home expenses to think about this, or merely haven't the courage to raise it, and even if they are genuinely convinced that this doomed operation is necessary for the safety of the Western world, why have they done so little to make the MoD protect the men they have allowed to be sent into danger? The American Pentagon has a special unit to combat roadside bombs, with a budget of about £2.8billion a year. On top of that, it is spending £1.45billion on new armoured vehicles. Even the tiny Irish Army has taken more decisive steps than ours to obtain mine-resistant vehicles.

That encapsulates so well our thinking. In the torrent on "mawkish sentimentality" – as one commentator put it – over the death of one child, precisely how much attention has been given to the deaths of these four soldiers? Why, asks Hitchens, have they [the MPs] "done so little to make the MoD protect the men they have allowed to be sent into danger?"

And that is the point. Parliament has a special duty to protect the men and women put in harm's way in our name. MPs have the power individually and collectively to bring the government to account and force it to take action. We saw that in June 2006 when, finally, the House got its act together and made an issue of the Snatch Land Rover. That forced Browne to undertake a review, from which emerged an order for protected vehicles.

Now, we can allow Parliament and the MPs their "gesture" over Ivan Cameron. But, as Hitchens writes, "However hard they strained their minds and sinews, our MPs could not have prevented the death of young Ivan, or altered his fate by an inch." On the other hand, had they exerted themselves, they could have prevented many of the deaths that have occurred in Afghanistan and, before that, in Iraq. But, as we have seen so often, the House has not exerted itself on their behalf.

Without a countervailing concern – and action - for the lives for which the MPs are truly responsible, the gesture on Ivan Cameron was self-indulgence. It belies a selective concern which does nothing more than highlight the abrogation of their duties and responsibilities.

Nevertheless, Hitchens, having got the point, has a suggestion:

If they can adjourn for poor Ivan Cameron, then they should be compelled also to sit in all-night session till dawn, to commemorate and debate in detail each military death in Afghanistan from now on. The way things are going, that should also solve their second-home problems. They won't need them, as they'll spend most nights in the chamber.

They will not do that of course, but they should. In preparation, they should be given the bundles of witness statements and technical documentation that are produced after every death, and be forced to read them.

Then they should, each and every one of them, be forced to stand up in the House and explain to the nation why they (with but a very few honourable exceptions) have personally allowed soldiers to go to their deaths ill-equipped and unprepared. And in the gallery should be the parents of those soldiers who have died so unnecessarily. Our MPs can look them in the eyes when they make their statements.

They owe us no less.