Then there were six … 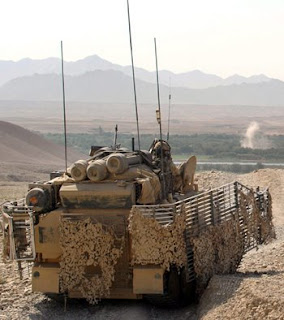 Yesterday brought news of the death of Trooper Ratu Babakobau, 29, from Fiji, late of the Household Cavalry Regiment. He was killed while on patrol in the Nowzad area of northern Helmand on Friday when the Spartan APC (pictured) in which he was travelling hit a mine. Three others, including an Afghani interpreter, were injured.

What makes Trooper Babakobau's death different – or, at least, gives it greater media profile – is that the 28-year old soldier had served with Prince William in the Household Cavalry last year, the same Regiment in which Prince Harry (pictured below) had also served while in Afghanistan earlier this year.

But there was another link: Trooper Babakobau was killed in a Spartan light, tracked armoured personnel carrier, exactly the same type of vehicle commanded by Harry while he was on operations. It takes little extrapolation to posit that the younger brother of the heir to the throne could have been killed. 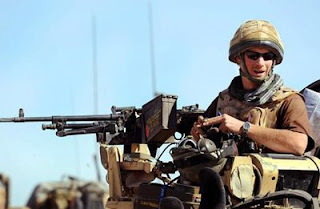 Predictably, much is made of the first link, but nothing of the other. Yet, in many respects, this is another unnecessary death, brought about by an inadequately armoured vehicle.

For sure, like the Viking, the Spartan is an armoured, tracked vehicle. Both will protect crews from rocket propelled grenades and rifle fire, they offer little, if any, protection against anti-tank mines or powerful IEDs. Some have undergone mine strikes where the crews have survived but, since neither are specifically designed as mine protected vehicles - unlike the Mastiff - crews will always be vulnerable.

Furthermore, the predominance of mine/IED strikes is now clearly signalling a change of tactics on the part of the Teleban. This is something that the BBC noted on its main evening news bulletins yesterday, when it reported the death of Trooper Babakobau, and is picked up by The Sunday Telegraph today.

The paper cites Gen Sir David Richards, the Commander-in-Chief of Britain's Land Forces and who commanded Nato forces in Southern Afghanistan in 2006. He confirms that the conflict is becoming more "asymmetric", noting that "…the conflict in Helmand is broadly is going the same as Iraq."

But, in a sentiment that seems to suggest a certain complacency or lack of realism, he adds, "… that does not mean we can't succeed. As professional soldiers we don't weep over these things, we find ways of getting around them."

Without the right equipment, however, there is very little soldiers – professional or otherwise – can do to protect themselves against the hidden threat of mines and IEDs, indicating that we are to see more such casualties and will continue to do so for as long as the military continues to field inadequate vehicles.

That theme, coincidentally, was also picked up by our favourite coroner, Andrew Walker, whose latest inquiry verdict was also widely reported yesterday, not least in The Sun and The Daily Telegraph.

Walker's complaint this time concerned the death of Marine Richard Watson who had been shot dead last December, after his patrol had been ambushed by the Taleban. 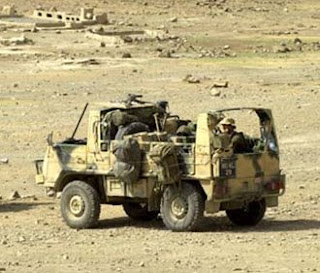 The circumstances are redolent of other incidents we have reported but, in this case, Marine Watson was riding in an unarmoured Pinzgauer utility truck (pictured).

A request had been made for a Viking but none had been available and Mr Walker ruled that, had one been provided, Watson – who had returned to his vehicle when the firing broke out - would have survived.

Of course, the Viking – as noted above – does offer protection against gunfire but does not resolve the mine/IED threat. One other vehicle – apart from the Mastiff - that goes a long way towards doing that is the Cougar/Ridgeback and it is perhaps appropriate that, at long last, the British government formally placed the long-awaited order for 157 of them last week.

Too little, perhaps, and – if not too late – certainly a lot slower than should have been the case, these will save lives when they finally arrive in theatre. But more than a few men are going to die unnecessarily before they do.