Bushmasters for the Army 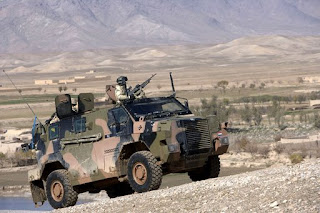 Picked up from a French defence website via a reader, we learned of a rumour last month that the British Army was poised to buy 24 Australian-made Bushmaster MRAPs.

As far as we can be certain now – in the complete absence of any statement from a British minister or the MoD - this is no longer a rumour. According to The Australian, the British High Commission in Canberra has confirmed that the vehicles have been bought, the paper's headline declaring that they are "for use in Iraq and Afghanistan".

A spokesman adds, "As I understand, the vehicles have been loaded and are on their way for use straight away," with the paper adding that it is understood most of the British Bushmasters have been earmarked for operations in Iraq – leaving the possibility open that some are headed for Afghanistan (or held back for training?).

This is extremely good news, providing a lighter, more manoeuvrable alternative to the 25 ton Mastiff. Weighing in at 12 tons, this nevertheless shares the blast-resistant v-shape hull design with the larger vehicle and, as kitted out by the Australian Army – which has ordered 600 - it is capable of carrying nine fully equipped soldiers. Its deployment in theatre should keep David Axe happy and reduce the whingeing about the size of the Mastiff.

The vehicles can be fitted with a variety of weapons ranging from light machine guns, a 40mm grenade launcher or a remotely operated 12.7mm heavy machine gun, and have a good reputation with the Australian and Dutch troops who are using them. 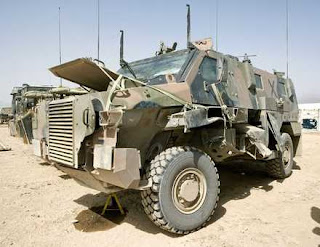 So far, no soldier has been killed in this type, or even seriously injured, although a number of Australian troops (mainly drivers) have been killed in their version of the Piranha, the ASLAV, the type chosen for the British FRES utility vehicle. A Dutch operated Bushmaster recently survived a potentially lethal IED attack in Afghanistan (pictured), the crew escaping without injury.

Without wishing to look a gift horse in the mouth, there are certain reservations about the plethora of vehicle types now being procured, and the apparent similarity with the Ridgeback recently ordered. With the logistics and maintenance efforts already stretched, it seems rather odd that yet another type is being purchased - especially as the precise role has not been specified.

One must also express some concern that we should learn of this deal from an Australian newspaper, rather than from the MoD. But then, this is rather typical of the contempt with which this ministry occasionally treats those who actually pay its bills, so it should not be too surprised if we reciprocate – occasionally.