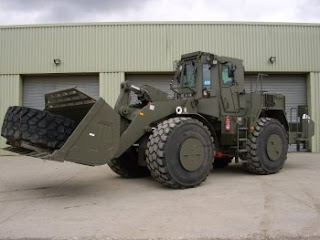 A £14 million fleet of 25 armoured "mine clearance vehicles" – desperately needed by British troops plagued by mines in Afghanistan – is being sold unused as "army surplus", at a knockdown price of less than £4.5 million – a loss to the taxpayer of nearly £10 million.

The vehicles are Caterpillar DV104 "Armoured Heavy Wheeled Tractors". They are based on the commercial Caterpillar 972G wheeled loader (spool down to page 9), which currently retails at $279,000 in the United States (about £150,000). But, by the time they had been armoured for the MoD by the specialist military contractor Penman Engineering and further modified by Caterpillar UK, they ended up costing the British taxpayer a cool £560,000 each.

Delivered to the Army in the Spring of 2001, they have remained unused and are now being sold by the MoD's preferred vehicle dealer, Witham specialist vehicles and other army surplus specialists (pictured below right).

Witham - which have been disposing of the machines for two years now - advertise their current stock of six machines as "Ex Reserve unissued and totally unused". They come complete with rear-view camera and air conditioning, at the knockdown price of "from £175,000" each - although they will have paid the MoD considerably less.

According to Janes, the vehicles were developed specifically to keep RAF airfields open during wartime. Their job was to act as pathfinders, clearing debris from runways and filling in bomb craters. The major threat to the drivers was unexploded bomblets on the runways, so the vehicles were fully protected.

However, these 20-ton armoured machines are also ideal for ordinary earthmoving in hostile areas (such as road-building in Taleban infested areas), barricade clearance, and for clearing routes of mines. On the Penman website, the same vehicle is shown with the bucket removed, fitted with a mine detonation roller. Other mine clearance tools can also be fitted and the rig is actually sold as a "mine clearance vehicle".

This is also the use for which Witham recommends the vehicles, describing them as: "Ideal for Mine clearance or Armoured Engineer applications". 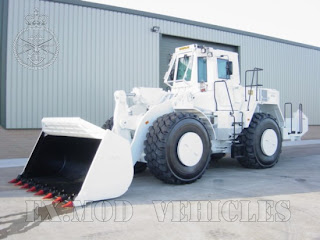 With operations in Afghanistan, where troops are constantly exposed to mines, these vehicles could prove lifesavers. Alternatively, where millions of old Russian mines are constantly causing civilian casualties, they could by used by the Afghan government or mine-clearance charities, which could make good use of such equipment.

This is by no means the first time the MoD has disposed of potentially lifesaving equipment. In 2006, while British troops were being forced to use lightly armoured Land Rovers in Iraq, it was reported that the Army had disposed of 14 mine protected Mamba vehicles, bought for £4.5 million and sold for a mere £44,000.

These same vehicles are now used by the US contractor, Blackwater, to ferry VIPs from Baghdad airport to the Green Zone, and have successfully warded off several bomb attacks. They are also used by the Estonian Army in Afghanistan alongside British troops, who lack similar protection.

Can we now expect the Caterpillar machines to appear in Afghanistan, in the colours of a different army, while "our boys" benefit from the rather different gear currently issued to them?

But, with such generosity when it comes to taxpayers' money, MoD "underfunding" takes on a slightly different complexion.