"It definitely saved my life" 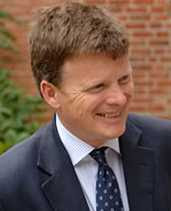 By coincidence, Defence Questions yesterday had Richard Benyon, Conservative MP for Newbury (pictured), ask a pointed question of the defence secretary, Des Browne, in relation to the growing toll from IEDs in Afghanistan.

"Given that a large proportion of the injuries suffered by members of our armed forces in Afghanistan are from roadside bombs and similar improvised explosive devices," said Benyon, "why are we still deploying troops in some of the most dangerous parts of Afghanistan in so-called snatch Land Rovers, when we know that such vehicles offer little or no protection against such devices?"

Browne's response is worth recording in full:

The hon. Gentleman and the House will know, because I have gone to some lengths to keep the House up to date, that we have been increasingly providing our troops with vehicles that offer the highest level of protection. Indeed, through Mastiff and Ridgback (sic), on which we hope to make significant progress over the coming months, we will be providing a total of 400 new vehicles that will offer that level of protection. The hon. Gentleman will know also, because it is reported back here regularly, that Mastiff has proved enormously popular with the troops in saving lives.

My obligation as the Secretary of State is to provide commanders on the ground with a range of vehicles. Our experience in Afghanistan shows us that the issue is not just a need for protected vehicles, in the sense of protected against such explosions; rather, we also need vehicles that give our troops both the necessary flexibility and movement, and a presence on the ground that is specific to the communities in which they are working. I fulfil that obligation. We provide a range of vehicles to the commanders. I do not intend to dictate to our commanders, with a long screwdriver from London, which of those vehicles they should use, but I am conscious of the need continually to develop and to deploy more protected vehicles, subject to that requirement. 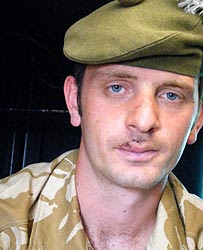 The coincidence, as it happens, was a BBC report on the children's news programme Newsbeat, accessible through the website, that report headed: "I survived a bomb attack". It offers an interview with Lance Corporal Jamie Dougal who was on a routine patrol in Helmand Province when the vehicle he was in set off an IED. Dougal was in the top cover position and sustained minor injuries and is now back on duty.

That, as Dougal makes clear, is entirely due to the fact that he was riding in a Mastiff. He tells the BBC: "Considering how bad the explosion was and considering the small amount of injuries I got, I'd definitely say that if it wasn't for the Mastiff I wouldn't be here today. "It definitely saved my life."

The BBC report tells us:

The Mastiff is the vehicle of choice in Afghanistan. The main threat from the Taleban are IEDs, but even they are struggling to get to grips with this incredibly tough piece of kit. At a cost of around £1m it's not cheap, but it's saving lives on a daily basis.

They test it out by driving it over mines. It has six wheels so it can keep going if some of them get blown off. The armour is designed to take the force of an explosion away from the vehicle, and it's covered in cameras so the troops inside can see 360 degrees around them.

That report also tells us that, "Amazingly no-one inside Jamie's Mastiff was hurt …", something of no surprise to this blog. It adds to the growing body of anecdotal evidence which attests to the value of these vehicles.

However, Browne's comments about not intending "to dictate to our commanders, with a long screwdriver from London …" perhaps hints at the underlying and continuing tension between the politicians and the military over the value of protected vehicles, with the MoD still pushing its Jackal "weapons platform", with an inordinate number of "puffs" on the MoD website, the latest here. 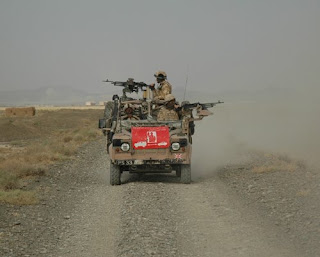 The extent of the mountain that has to be climbed to get it through to the military that their existing equipment is dangerously (and unnecessarily) vulnerable comes in the 2008 90th Anniversary edition of the RAF Yearbook. Page 8 and 9 – about the RAF Regiment - make sombre reading. Page eight reads:

The Regiment has recently received the latest Pinzgauer Vector armoured vehicles, and updated Wolf, WMIK Landrovers to bolster its daily patrols covering the AOR of over 480sq kms.

On page nine, it then states:

The RAF Regiment squadron provides a Quick Reaction Force (QRF) and also undertakes regular long-range patrols over the area, for extended periods making themselves known to the local village elders and population … Equipped with the latest Wolf Land Rover, armed WMIK Land Rover and recently arrived Pingzgauer Vector armoured vehicle, the squadron has a broad remit and flexibility to conduct a range of patrols in order to achieve their missions…

The article, according to one of our correspondents, gives the impression that the Regiment beleives it has been issued the "Mutts Nuts" of armoured vehicles. Given recent casualties in mobile patrols (here and here), their enthusiasm is somewhat misplaced. 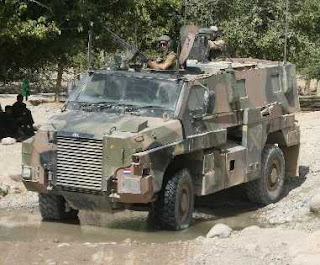 The dangers of conducting "regular" patrols" and "making themselves known to local village elders" (and Taliban) while using Vectors and WIMIKs does not seem to have dawned on these particular military geniuses, who seem to need more protection from themselves than the Taleban. As our correspondent writes: "Words fail me".

In the protection stakes, an unconfirmed report in a French defence journal - apparently based on a report in DefenseNews - has it that the UK intends to order upwards of 24 Australian-made Bushmaster MRAPs (pictured above) – each equipped with a Kongsberg 12.7 mm remote weapon station. They are, it appears, to be used for "electronic warfare".

This, if confirmed, would be an interesting development and perhaps indicates that the Browne message that we need "continually to develop and to deploy more protected vehicles…" is slowly getting through.