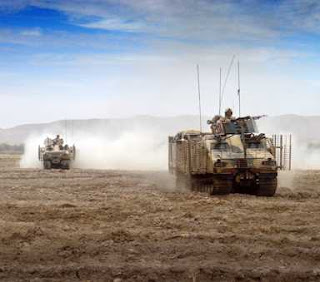 This blog is in a very small minority, having been less than enthusiastic about the Viking tracked armoured vehicle and its deployment in Afghanistan.

Despite receiving laudatory puffs from the MoD - and despite its undoubted cross-country performance – it is not a mine protected vehicle and crews are highly vulnerable to this form of attack.

That much, sadly, is borne out by the latest MoD casualty report, amplified by a much more detailed report in The Guardian, which records the death of Trooper Robert Pearson from the Queen's Royal Lancers, killed when his Viking was hit by a "suspected mine". A second soldier was injured in the blast.

The Guardian observes in passing that five British soldiers have been killed in south Afghanistan in the past three weeks, all by roadside bombs or mines, noting – as have we – that the Taleban are shifting their tactics from open confrontation and gunfights with British and other Nato troops.

That the Taleban are resorting to mines and bombs is, in a sense, good news, it being evidence that they are losing the tactical battle with Nato forces. This is further evidenced by comments retailed by The Guardian that the Taleban's command and control in Helmand province had been "fractured" by their losing the town of Musa Qala. British commanders thus describe the Taleban as on the "back foot"

However, the fact remains that the British Army remains poorly equipped to deal with the change in Taleban tactics, which – we never tire of pointing out – was predictable and predicted nearly two years ago.

For sure, we await the deliveries of additional Mastiffs and the new Ridgeback, but there is more needed, including more and better UAVs and active mine detection and route clearance, using Husky sets and other equipment.

With the limited equipment available to the Army to deal with the mine threat, we continue to maintain our stance that it is not being properly addressed, and this latest incident would appear to offer some confirmation of that view.