The Generals get their toys 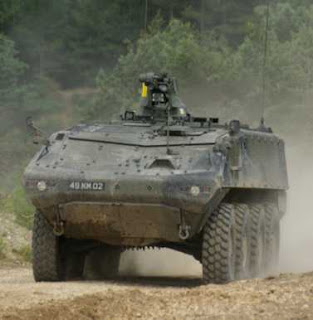 When the history of the British Army covering this period comes to be written, it will be of a small, poorly equipped force fighting simultaneously on two fronts – in Iraq and Afghanistan – with its High Command obsessed with buying shiny new toys which have absolutely no relevance to the tasks at hand.

That is the effect of the MoD announcement today, Baroness Ann Taylor, Minister for Defence Equipment and Support, telling the world that the General Dynamics Piranha V (pictured) has been selected as the preferred design for the Future Rapid Effect System (FRES) Utility Vehicle. This, we learn, is the first of the Army's programme for a new force of battlefield armoured vehicles.

We have rehearsed the arguments on FRES endlessly, but most notably here which – uniquely for a blog – drew a direct response from the then procurement minister, Lord Drayson. We responded here and in more detail here, but have published many posts subsequently which touch on FRES and the utility of vehicles designed for "high-end" warfare in counter-insurgency operations.

In one of those, we rehearsed specifically the idea of using a dual-purpose vehicle being designed for both high-end warfare and COIN operations, and concluded that the requirements for each were so diametrically opposed that a compromise means a sub-optimal design for both.

We have also noted that the design on which the current Piranha V is based is in current use in Iraq by US forces, under the guise of the Stryker. And while the tactic of using a fast response wheeled armoured vehicle has met with some success, it has not been without its losses.

Similarly, the Canadian Army in Afghanistan also uses a version of the Piranha, and it too has suffered considerable loss, so much so that the Army has acquired additional route clearance equipment to safeguard this vulnerable vehicle.

Nevertheless, such is the obsession that the Army is prepared to mortgage the present for what DefenseNews suggests will be 2,000 vehicles, at a reported cost of £6 billion – with up to £30 billion for through-life costs.

This points up the real issue. The Armed Forces are chronically short of money and, as we wrote in a recent piece, are desperately short of transport aircraft, helicopters, mine clearance equipment, MRAPs and other vital kit. What is spent on FRES cannot be spent on other things, so the real cost of this obsession is in the equipment that will not be purchased.

The ultimate irony, of course, is that with deliveries due to commence in 2012, the likelihood is that the Conservatives will then be in office – following a general election in 2010. So it will be they, rather than the current administration, which will have to foot the bill.

By then, the odds are that the equipment state in then current operations will be even more parlous, which – short of the Conservatives finding considerably more money for defence – will leave them having to explain why they too are "underfunding" the Armed Forces. It will be too late then to explain that the money has run out because it has all been spent on buying shiny – but ultimately useless - new toys for the generals.