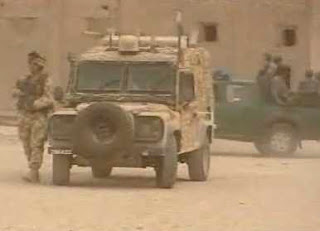 It must be marvellous to be "above the line", one of my colleagues observed, à propos the offering from Allan Mallinson, "author, military historian and soldier for 35 years", writing in yesterday's edition of the The Daily Telegraph.

When we could last be bothered with him, he was again writing in The Daily Telegraph, then bitterly complaining – amongst other things – about the lack of funding for defence.

Now, without even a hint of a blush, he has decided that the real problem is that the defence budget … "has been, and still is, committed to longer-term and ruinously expensive projects."

Gordon Brown, he writes, is not honestly, let alone adequately, funding the forces and, "If he will not find the money, he must at least be bold and choose which of the alternatives to make his main effort". Thus, asks the great man, "do we risk losing the war we are engaged in, or the distant war whose nature we can barely discern?"

At this point, we can but say hallelujah! At last, the man has recognised the underlying tension between the need to equip and fund our military for current operations, and the more grandiose and expensive plans for the "future war", something this lowly blog has been banging on about for some little time.

Mallinson even half-recognises where the problems lie, noting that, "Senior officers have not always been ready to make bold choices either." Each service, he tells us, "has its cherished equipment programmes, often harking back to simpler certainties and more direct ways of fighting."

The Royal Navy, he opines, still dreams of command of all the oceans, the RAF defends the skies as if every airfield on the Continent has fallen into enemy hands … and, "Even the Army, struggling to fight battles as primitive as a century ago, can still hanker for sweeping armoured manoeuvre in some empty space."

Close though he might be, Mallinson has not even begun to understand – or at least articulate details of – the bitter in-fighting that has been going on, as the services have sought to defend their precious "big ticket" programmes – not least the Army, its current champion Chief of the General Staff, Sir Richard Dannatt. He has staked his reputation on the white elephant FRES project, variously estimated at £16 billion, which is still dominating equipment plans.

Nor does Mallinson seem to have any idea of how the procurement was fatally distorted by Tony Blair's dalliance with European defence integration, and his commitment to the St. Malo inspired European Rapid Reaction Force, which is still creating a drag on the defence budget.

Instead, he grandly declares that, "Gordon Brown must switch the priority to the needs of the war we are actually in …". Then, he says, "…all the service chiefs can then trust to is an incoming Tory government brave enough to make an overall adjustment to public spending, thus finding the extra money to reinstate the long-term projects."

What he fails thereby to appreciate is that the Army – in particular – has been dragged kicking and screaming into addressing the needs of counter-insurgency warfare. It is still resisting pressure, coming mainly from the politicians (but with some intelligent allies in the military) for restructuring to deal with the specific needs of such campaigns, and to acquire the equipment necessary to fight irregular forces.

Another problem that is emerging, however – which will intensify with the local election results. This is hinted at by Mallinson when he refers to an incoming Tory government "… finding the extra money to reinstate the long-term projects," although the scenario he posits is again wide of the mark.

A weakened government, losing electoral support - as we see from yesterday's local election results - also loses "moral authority" and has difficulty driving though its agenda. Thus, while the service chiefs know full well that there are not going to extract any additional funds from the Tories, they can obstruct or delay attempts to divert long-term spending to operational needs, in the hope that any new Tory government will then be able to restore the cherished "big ticket" items.

That, to an extent, is already what is happening, which is made worse by the genuine difficulty in deciding how best to deal with the current operations – and to balance the budget to accommodate strategic requirements.

As numerous postings on our forum indicate, there are a wide range of ideas and opinions on what is needed, presenting a degree of uncertainty which politicians abhor. By contrast, the advocates of existing programmes can offer apparent clarity and a sense of purpose which an untried, incoming government might find attractive.

Enter Ann Winterton who in defence questions last Monday asked Des Browne if he was aware of the recent statement by Robert Gates, the United States Defence Secretary, referring to our recent involvement in various theatres, a part of which she quoted:

For those missions that still require manned missions, we have to think hard about whether we have the right platforms, whether for example, low cost, low tech alternatives exist to do basic reconnaissance and close air support... where we have total control of the skies?

Crucially, she concluded by telling the secretary of state that the US defence secretary was to set up a task force. Would Browne do the same?

There is a lot of sense in this suggestion. While the Conservatives are rooting for a full-scale strategic defence review, the pressing need is to look at individual functions such as the provision of armoured vehicles, the nature of close air support and the supply of tactical helicopters. With "Snatches" still in use in Afghanistan (pictured), Gates-style task forces would be a much better and faster option.

Unfortunately, Browne did not respond to that part of the question, which leaves it hanging. Yet a properly conducted series of reviews would do much to break the grip of an obstructive military and bring issues out into the open, enabling important decisions to be made that much faster. And time is not on our side.