It needed to be said 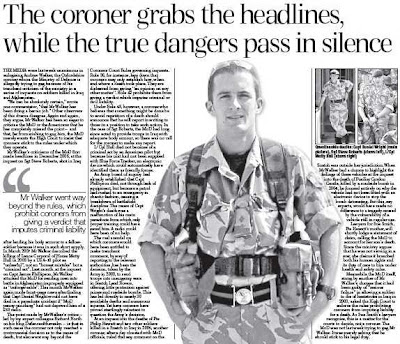 Ever unfashionable – until sometimes years later the media wake up to the story and publish what he had already written about (usually without acknowledgement, even though we can sometimes see the exact same phrases used) - Booker takes on the self-aggrandising Mr Andrew Walker in his column today.

This man, as readers will recall, is a deputy assistant coroner for Oxfordshire who, for the last few years has created a major industry in providing lurid headlines for the media, on the backs of soldiers who have died in Iraq and elsewhere.

Having tried the patience of the Ministry of Defence beyond endurance, he has finally been taken to the High Court in an attempt to get him to obey the law by which he is bound, the man has been hailed as a "hero" by the media, the MoD action being characterised as an attempt to "gag" a man who has spoken up "powerfully" for the welfare of British troops in Iraq and elsewhere.

In our view, however, the man is a parasite, feeding off the notoriety that comes with giving a "drive-by media" exactly the headlines it wants, failing entirely to address issues which he could rightly have identified. Thus, far from protecting the welfare of our troops, he is part of the reason why, still, major failings in equipment and procedures continue unchecked.

It would be wrong, however, to single out Walker. Without the ignorance and laziness of the media, his voice would have little of its power. A critical, well informed press would not have taken his effluvia at face value and would have looked beyond the shallow, self-serving vanity of the man. In so doing, it would have perhaps realised that, rather than getting to the core of the cases he has dealt with, his high-profile denunciations tend to obscure rather than illuminate.

Behind this, though, is the more insidious and corrosive tendency of the media to reduce everything into a one-dimensional, "biff-bam" soap opera. Rather than make any attempt to understand the complexity of a department such as the MoD, with its hierarchical structures, its Byzantine procedures and the diffusion of responsibilities, it chooses then to personalise failures, attributing them to the single man nominally in charge, the current secretary of state for defence, Des Browne.

There is no more egregious a practitioner of this tendency than Steven Glover who, in his recent Daily Mail column, pins the blame for all ills on "a cowardly, weak, incompetent Secretary of State for Defence who should hang his head in shame."

Such talk is cheap, especially from the comfort of a desk, shrouded in the warm glow of smug self-rightousness. But it not only misses the point. It is an abnegation of the very core principles of journalism which, in a liberal democracy, plays a vital role in holding the executive to account. But, to be effective, it must be accurate, timely, and focus precisely on those issues which need addressing, pinpointing where possible, exactly where blame lies. Glover's criticism does none of those things. And neither, until Booker published his corrective, does the rest of the media.

Ironically, today The Sunday Times revisits the Thalidomide case, scenes of past glories for that newspaper when it established a global reputation for the tenacity of its investigative journalism.

So far have the mighty fallen though that it and its fellow travellers - in what used to be called "Fleet Street" - now rely on the handouts from a vainglorious provincial lawyer and call this news.

The pity of it all it that, like sheep, the bulk of the population follow. One only has to look at the comments on the various on-line articles lauding Mr Walker – and the few blogs that have recorded his mouthings. From that, it is possible to conclude that the media is very much a mirror. It is simply reflecting the prejudices and superficiality of many of its readers who – when all is said and done – are no more interested in the welfare of our troops than is Mr Walker.