And so it begins 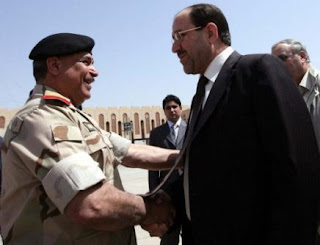 Exactly as predicted, parts of Basra have erupted in fighting as reports come in that Iraqi troops have taken on the Shiia militias. The action is reported to be concentrated in six northern districts where the Mehdi Army militia of radical cleric Moqtada al-Sadr is known to have a strong presence.

Amongst the many offering early accounts is The Times which has it that thousands of Iraqi troops "have launched their first major military strike against Shia insurgents in Basra since British troops withdrew from the city centre, in a critical test for the newly-trained army."

The paper reports that "fierce clashes" are taking place between security forces and militants loyal to the radical cleric Moqtada al-Sadr after a dawn military offensive. Four civilians are claimed to have been killed, with 16 injured. Police have confirmed the start of the operation, dubbed Saulat al-Fursan (Charge of the Knights) which came after a 10:00 pm to 6:00 am curfew was slapped on the entire Basra province late on Monday.

Indicating its importance, Iraq prime minister Nouri al-Maliki has travelled down to Basra to overseeing the operation. He is pictured (above) at the Contingency Operating Base at Basra airport. 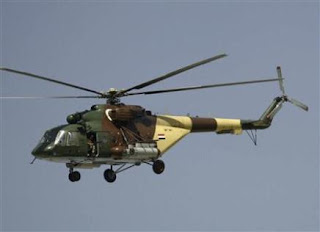 So far – we are told – British forces have not been involved (directly), but US aircraft are said to be carrying out surveillance missions – along with Iraqi helicopters (pictured).

The Guardian adds some more detail – relying on Reuters repots. It tells us that fierce street battles have erupted and that "heavy resistance" has been encountered as fighting broke out with gunmen from Moqtada al-Sadr's Mahdi Army militia.

Quoted is Major-General Ali Zaidan, the commander of Iraqi ground forces in the operation, who states that: The target is to wipe out all the outlaws …There were clashes, and many outlaws have been killed." TV footage is said to show smoke from explosions rising over the city and Iraqi soldiers exchanging gunfire with militia fighters. "There are clashes in the streets," a Basra resident has told Reuters. "Bullets are coming from everywhere, and we can hear the sound of rocket explosions. This has been going on since dawn."

In this volatile mix are three factions - the Supreme Islamic Iraqi Council, the Mahdi Army and the small Fadhila party - all fighting for power in Basra. The Mahdi Army warned that tensions in Basra would escalate if its members were targeted by the authorities. They have demanded the release of supporters rounded up in recent weeks after the cleric told his followers they were free to defend themselves against attacks. 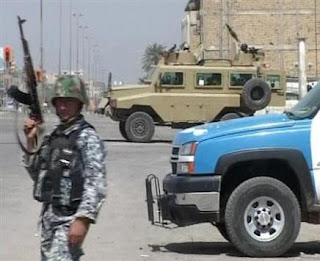 Witnesses are saying that the streets were empty aside from the security forces, emergency vehicles and people in cars fleeing the fighting. Shops and markets were closed. Vehicle access to Basra has been temporarily closed from neighbouring provinces due to the curfew while teaching at schools and universities had been suspended.

As to the immediate prospects for the operation, Reuters quotes Joost Hiltermann, an Istanbul-based analyst for the International Crisis Group think-tank. He believes, "It will be very difficult for the central government to regain control," adding, "You have many armed groups that are looking to keep hold of their share of the oil wealth. The central government is clearly upset about this because they want to assert control."

Ironically, still topping the MoD website is a "puff" from the CDS, Air Chief Marshal Sir Jock Stirrup, who – commemorating the fifth anniversary of the invasion of Iraq - tells us that, "More and more people in Basra are turning from violence on the streets to politics." 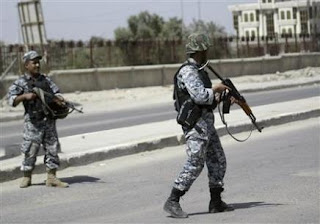 Equally ill-timed is the initiative today by the Conservative Party which is holding an opposition day debate in the Commons on Iraq and is planning to force a vote on whether there should be an inquiry into the lead-up to the war. With the whole of southern Iraq in the melting pot, upon which the fate of the whole of the country could depend, now is not the time when government (and military) effort should be directed to raking over the coals of the past.

Leading the debate is shadow foreign secretary William Hague, who claims that, "…the huge problems of how to administer Iraq after the invasion - the study of that may lead to lessons which have direct applicability to the situation in Afghanistan, so again it's important these lessons are learned."

It comes to something when this maladroit move draws one into agreement with justice secretary Jack Straw who says, "What is more important even than an inquiry is that the troops who are on the ground - there are still 4,100 British troops in harm's way in Iraq - should not themselves be distracted by what would inevitably and understandably be a very significant argument about whether it is right or wrong for them to be present."

One would have hoped that minds would indeed be focused on the present - on what could be the defining moment, as to whether Basra finally begins to emerge from the blight of factional infighting.