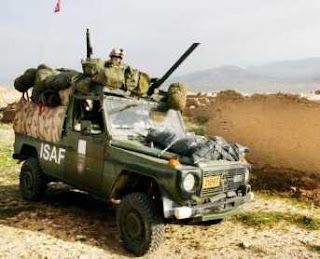 After an incident in February 2006 when a Norwegian Mercedes Gelendevagen was torched by an angry Afghani mob, the military authorities took fright and placed a rush order for 72 Iveco MLVs – the Panthers of British fame.

Now, with these vehicles deployed in theatre, Norway Post is conveying a report from the newspaper Dagsavisen that they are "too often plagued by engine breakdowns."

The engines of the Iveco armoured troop carriers do not stand up in the tough conditions in Afghanistan, the paper writes, and the modern engines are "too complicated for the soldiers to be able to fix the problems out in the field on their own."

This means, we are told, the troops are often left unprotected on the road while waiting for maintenance, and many Norwegian soldiers often drive about in cars that are not armoured.

I hate to say, "I told you so", but … I told you so! Or, as the ludicrously poor machine translation of the original Dagsavisen article says: "Jeepene at they Norwegian soldier in Afghanistan am mighty bad preserved against veibomber".

Meanwhile, the Czech authorities, having also bought Iveco MLVs for their operations in Afghanistan, are buying some more protected vehicles. This time, however, they are buying German-made Dingo 2s.