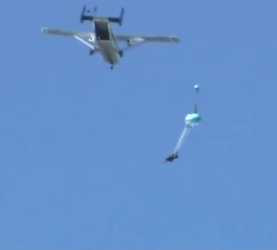 Andrew Walker, the assistant deputy coroner for Oxfordshire, has done it again. Recording a verdict on the unfortunate death of Captain Daniel Wright, he concluded that the officer "would not have died if he had been equipped with a radio".

Wright, who had exited from a Skyvan aircraft over Weston Green in only his second ever training jump, had suffered a rare malfunction to his main canopy. But, instead of "cutting it away" after four seconds, as the drill demanded, he made the fatal mistake of struggled to clear it, leaving it too late to deploy his reserve chute.

Had be been equipped with a two-way radio, the coroner held, ground instructors could have warned him to take the corrective action earlier, saving his life. Delivering his verdict, Walker's precise words were: "Captain Wright, on the balance of probability, would not have died had an operator on the ground at the drop zone been able to communicate with him using a radio."

What gives this verdict "legs" is that during the course of the evidence, it had been revealed that the CO of the jump school had requested radios for his students, some nine months before the incident, and had apparently been refused the equipment – costed at £50 per unit – "as funding was only available for essential items."

The story – before even the Coroner had delivered his verdict – had already been picked over by the media, The Daily Telegraph claiming that, "Captain Wright's death is one in a long line of fatalities in Iraq and Afghanistan (sic) which have been blamed on equipment failures and shortages."

It was The Sun, however, which has made the biggest issue of the death, claiming, "Hero Dan and other troops might be alive today — if only they had been given the right KIT."

Predictably, the media now pick up on the verdict, the Press Association picking up on a quote from Wright's mother, Carol Wright, who claims that her son's death was due to, "MoD's penny-pinching".

Cited speaking outside the court, she said: "For the sake of a flipping radio they have lost a potential star among their ranks. We ask the MoD to accept their penny-pinching has resulted in a far greater use of public funds - for example, the cost of this court case."

Now, The Times has published the stroy, cementing it is as yet another case of MoD neglect, adding to the litany of failings attributed to this organisation.

However, for once, there is no agreement on the unofficial Army forum, the consensus of opinion being that training, not technology, is the most effective way of mitigating risk. One commentator argued that, "..you had to take responsibility for your own emergency drills - being second-guessed by radio would have diluted that vital sense of self-preservation."

We consulted our own expert on this, veteran of hundreds of jumps, who told us the following:

You are trained and trained and trained to count to four and then check your canopy is open. This is deeply ingrained. On one of my early malfunctions (the one that nearly killed me), I had the pilot chute wrapped around my ankle, I had a sleeve deployment, but that's where it stopped. I thought the lump of white I could see was OK, until I realised that the ground was still getting too close, too fast. It was a round canopy, so I didn't need to eject the main (with a square you have to or they wrap around one another), and luckily pulled my reserve at about 400 feet.

Any later, it would have been too late; a little earlier and the reserve would have been breathing (releasing the excess pressure from the initial opening) and I would still have hit the ground too fast to survive. The whole experience is so totally overwhelming that frankly I think a radio would have been a total waste of time.

Besides, I've seen a couple of friends "ride it all the way in"; the last at (deleted) where my friend (deleted) - a very experienced- jumper was jumping unfamiliar kit that he hadn't practised enough on and spent the last seconds fighting with the ejection system he thought he had (on his own kit) but wasn't there (on this borrowed kit). We watched him struggling, but with the best will in the world, the ground crew's a long way away and there's nothing meaningful they can say from that distance and even if they could. Time is so desperately short.

At that point, your window is only a couple of seconds (depending of course on what type of malfunction it is). With all respect to the pundits, and I'll be happy to be proved wrong, it sounds like an unfortunate student who f****d up and a radio would not have made the blindest bit of difference.

He then goes on to say:

Having been here, I can assure you that you are by then in a blind panic. The g forces are tremendous, the wind is still rushing past, the ground is spinning extremely fast ... the only thing that will save you is training.

It is very hard to say to a grieving mother that her son was the victim of an unfortunate accident, but it also has to be said that parachuting is an intrinsically dangerous occupation – especially for the novice.

Here, though, there is an issue which the coroner did not address, and that was the current practice of training special forces directly on high performance "square" parachutes. 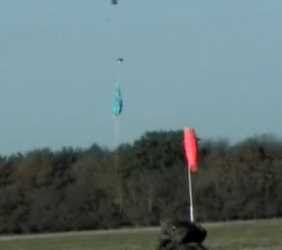 Many experts would prefer students first to go through the basic parachute course, jumping with a conventional round parachute from a static line. This, it is held, allows students to experience in relative safety the "sensory overload" that occurs in the first few jumps, better equipping them to handle the more complex and demanding parachutes.

If there has been "penny pinching", perhaps it is in this direction that MoD critics should look, as there does seem to have been an element of trimming. And it is this that possibly led to the original request for two-way radios. Having accepted unduly truncated training, it is speculated that course managers were "covering their backs" by asking for extra kit.

Looking at this in the round, the coroner could possibly have provided a real service by exploring whether Captain Wright had been put in a position where he had been inadequately trained to deal with the emergency that confronted him, on what was only his second jump.

That, though, was not to be. Walker did, however, recommend that an automatically-deployed reserve parachute should be used in future for novice military parachutists – a provision that many experts would not agree with. He also suggests that they should jump from a higher altitude, like civilians. That may or may not have helped in this case, but it seems sensible – as would perhaps be a reserve static line (RSL), although that was not discussed.

What we have here, therefore, is coroner Andrew Walker offering a foil to the media without getting to the bottom of a problem – if it exists. In the pursuit of improved safety, the clinical analyses of reasons for failure are a vital to determining what precise measures should be taken to prevent recurrences. In this case, neither the coroner nor the media seem to have assisted in this process.

Instead, each seems to have pursued their own narratives, to the detriment of the people who deserve better of them.