Maybe things ain't what they seem 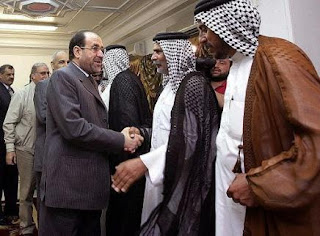 At noon yesterday (Iraq time), Shi'ite militia were reported to be storming a state TV facility in Basra, forcing Iraqi military guards surrounding the building to flee and setting armoured vehicles on fire.

Nothing seemed better to illustrate the degree to which Maliki's troops had lost the initiative yet, hours later, Muqtada al-Sadr seemed to be throwing in the towel, calling on his Mehdi Army to cease their attacks on Iraqi security forces.

If this development surprised most people (including us), Reuters is claiming that it even caught Sadr's own followers off guard especially – or so it seems - as Maliki is offering no concessions and has pledged to continue his military operations in Basra.

The immediate response seems to have been a lull in the fighting, according to local sources, although attacks are not expected to cease completely. Some even suggest that the "truce" may not stick.

However, a local blog Talismangate disputes the media "take" on events and in particular the NYT claim that most of Basra had been under Mehdi Army control. According to this source, this is a complete fabrication. He continues:

As of last night, the Iraqi Army began a systematic cleansing of downtown Basra and its southern suburbs, meeting minimal resistance. The criminal cartels struck at police stations in the northern portion of the city that the Army has decided not to contest for the time being as they roll up the gangsters in the more economically sensitive areas of the city.

To sum up, he writes:

…the trend has been diminishing resistance when faced with Iraqi military units who have performed exceedingly well. More and more areas that witnessed flare-ups are calming down as Mahdi Army loyalists run out of supplies and escape into hiding. Maliki is growing more defiant and confident and this sentiment in running down the chain of command.

All political attempts to broker a ceasefire by involving Ayotallah Sistani's office have been rebuffed by Maliki and by Sistani himself from the looks of it. In two weeks, the dust will settle and this episode will be remembered as a major victory for Maliki and the Iraqi state. But no journalists will be fired, no self-described "experts" will be publicly ridiculed; no one will be held accountable for all these distortions. But the distorters will know, deep down inside, that they are frauds and this realization will slowly eat away at them. And that's the silver lining.

Other interesting observations come from an earlier post, explaining the reason why the media is so "negative" ... nobody really knows what's going on:

To start with, the Americans don't know Basra all that well having had subcontracted handling things down there to the feckless Brits. It isn't surprising that the British media, influenced as they are by how British diplomats, officers and spooks gauge things, are writing-up Basra's news with such overblown gloom. Those same British officials have their careers on the line since it was their pathetic shortcomings that led to the miserable condition that Basra is in, and it’s in their interest to present the situation as intractable.

If Maliki succeeds, then there should be follow-up investigation as to why the British failed in so lucrative an economic prize as Basra and Amara - the two provinces they were tasked with - so those folks who've got their reputations on the line want to make darn sure that no one walks away with the impression that Basra is salvageable.

For now, the Brits are hunkered down in Basra Airport, far away from the action, where they've been taking attacks - both of the explosive variety in addition to random pilfering and looting - by whatever bunch of bored Basrawi teenagers decide to pick on them on any given day. No wonder they are dismissed by both officials and townspeople in Basra as "wimps" and "sissies". So one can safely assume that the British are as clueless as the Americans when it comes to Basra.

Interestingly, Longwar Journal seems to support the upbeat assessment, calculating that the Mahdi Army has taken significant casualties, while Time Magazine reports that there has been "a large-scale retreat" of the Mahdi Army because of low morale and because ammunition is low due to the closure of the Iranian border. 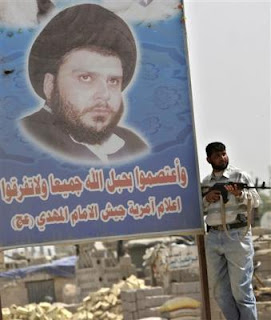 Yet, there is clearly a media narrative which is almost consistent through contemporary reports, the latest bulletin from The Daily Telegraph, for instance, referring to the "struggling Iraqi army and police operation in Basra."

Purely on their own internal logic, however, the negative reports have to be inconsistent. If the Mahdi Army was being so successful and the Iraqi Army in such disarray, then one would hardly have expected Moqtada al-Sadr to have ordered his fighters to stand down.

Clearly, there is far more going on here than we are being told and reports on which one should be able to rely must be treated with the greatest caution. Thus, while the NYT writes of street clashes persisting in Basra and other cities, things could be far better than has been indicated.

On the face of it, this is good news for Gordon Brown as the need for a full-scale British intervention could be less likely than has been indicated, and might suggest that British forces could soon be returning home. However, with no statement forthcoming from the prime minister after six days of fighting, we are none the wiser as to what his appreciation of the situation is and what his intentions are.

It really is quite unacceptable that, where major events such as these are afoot, where the vital interests of the UK are involved, our prime minister cannot even be bothered to keep us informed.