Where do you want me to stick my head? 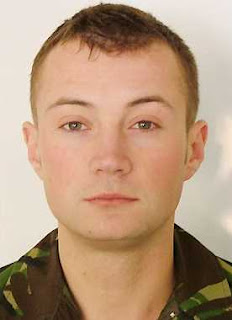 "Questioning is good," writes one of our forum members - "but might you not dilute the value of your posts by so consistently going above and beyond?"

He goes on to say:

I do not think anyone would disagree with your general argument that there have been occasions when the troops have been ill-equipped for specific missions during this campaign. However, this is not news to anyone in the Army and our general philosophy is that you make the most of what you have. What is more, officers and NCOs these days are quite able to speak up and object to an order if they think it is a tad daft and will do so.

Now, fast-forward to the latest coroner's report, this one on the death of Lance Corporal Sean Tansey. He was crushed to death when an eight-ton Spartan armoured vehicle collapsed on his head while he was carrying out repairs.

According to the BBC report, Tansey would have survived had proper wooden supports been placed under the vehicle. The inquest in Oxford was told that the only cushioning support available was old bits of pallet wood. The jack used could lift a Ford Cortina, but not a Spartan.

The inquest was told that cushioning planks, known as "skidding", would have saved the soldier's life while L/Cpl Edward Sampson, who was helping to repair the tank's broken torsion bar, said the team had no proper wooden planks. He told the court: "There was a big clunk. The vehicle pitched forwards and Sean's head was underneath it."

The tools Tansey needed were at his base in Helmand, so he was told to ignore engineers' advice and fix it. But, he could only obey his orders by going against Army guidelines and crawling under the vehicle, which fell on his head. When the coroner asked if soldiers could refuse to do repair work on health and safety grounds, L/Cpl Sampson answered: "That's not the way the Army works. If you are told to do something you do it."

Taking a dispassionate view of this, one does not have to be an expert – much less a military genius – to realise that you do not stick your head under an eight-ton vehicle, supported only by a lightweight jack and some pallets. This is not so much an arcane technical issue as a basic survival strategy.

After all, we have all been there (or most of us). Having to do basic vehicle maintenance, the one thing you do not even think of doing is climbing under a jacked-up vehicle without proper support.

But hey! This is not some fly-by-night, cowboy outfit. This is yer actual Army – dedicated, committed professionals, staffed with NCOs who, "are quite able to speak up and object to an order if they think it is a tad daft".

So – here's the scenario: "Lance Corporal, stick your head under this badly supported vehicle, and fix the old gubbins!" And, says the L/Cpl: "Certainly Sir!"

Unfortunately, the reporting coroner here is our old friend Andrew Walker, and he chooses to pin the blame on the MoD and focus the "serious failure" on "equipment shortages".

But this is not about equipment – it is about mindset, about adopting safe systems of work and levels of supervision at unit level, which ensure that basic safety procedures are adopted. And, before anyone asks, yes – that is a qualified view. In a previous career, I was a health and safety enforcement officer, carrying out routine inspections of workplaces to ensure compliance with health and safety law.

Had this incident been in civilian jurisdiction, there would not just be a coroner's inquiry. On the face of it, there are good indications that a criminal prosecution would be warranted, under the Health and Safety at Work Act 1974. As it is, an MoD spokesman says: "We note the coroner's comments and will ensure that lessons are learnt from this tragic incident."

That is not good enough. There is prima facie evidence of a criminal offence and, if civilian supervisors would be exposed to prosecution, why is the Army any different? Ah, we are told, in the Forces, "you are taught that you make the best possible decisions with the available facts and do not crucify yourself in hindsight." Obviously, no need for a prosecution then.

Nor, it would seem, is there any need to "crucify yourself in hindsight" with the "best possible decision" – for example – to field Pinzgauer trucks in mine-infested country, the drivers so positioned as to take the full force of mine blasts, with no protection at all. So – here's the scenario: "Lance Corporal, stick your bum on that unarmoured wheel-arch and drive down that road where there might be a buried mine!" And, says the L/Cpl: "Certainly Sir!"

Never mind, the people involved at the tactical level are "intelligent and committed types" who "might really have to live with the fact that a death occurred as a result of their bad decisions."

So that's alright! Where do you want me to stick my head?