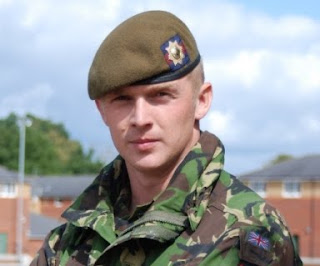 Things are improving in Sagnin. From the desperate picture painted by Anthony Loyd earlier this month – referring to his experiences in August – we get a completely different "take" from Miles Amoore.

The district, Amoore writes, which has seen the vast majority of British casualties during the bloodiest summer of the eight-year war, is now the focus of operations to counter the IED threat. Helicopters, UAVs and aircraft, which were sucked into Operation Panther’s Claw around the provincial capital of Lashkar Gah during the summer, have been made available to Sangin.

The helicopters, in particular, have allowed commanders to launch Operation Storm: over the past two months troops have air-assaulted into areas that lie beyond the belt of IEDs ringing the army's main bases, moving behind the Taleban's frontline in an onslaught against known IED teams aimed at preventing them from setting their lethal traps.

"We have shifted our operational mentality," said Capt Tom Beasley, who manages operations for the 2 Rifles battle group in Sangin. "Patrolling and looking for a fight meant that we were hitting IEDs. It was not going to be practical unless we changed things. Operation Storm was a response to the IED belt getting so close it was foolish to keep pushing out, finding an IED and then the entire patrol revolving around that incident."

That is how it should be, of course, with different tactics evolving to counter specific threats – and from all accounts they are being relatively successful. Certainly, we have not recently been appraised of any casualties from the area so, mercifully, they seem to have worked.

However, although the new tactics were evidently resource-led, it has long been known that, as Capt Beasley admits: "Patrolling and looking for a fight meant that we were hitting IEDs." Pending the availability of resources, there had been nothing to prevent the Army adopting a more passive stance, to avoid the inevitable casualties.

Nevertheless, even if the Taleban have been thwarted in Sagnin, that does not mean the battle is over – far from it. The focus of attacks has merely shifted to a different location, the previously "safe" main base at Camp Bastion. First of all it was an attack on an RAF Regiment Vector, patrolling the perimeter.

Now, we learn that Guardsman James Hill, of the Coldstream Guards (pictured), who killed last week, had fallen foul of an IED emplaced near the entrance to the base's firing range. The attack, described as "an unprecedented breach of security", also injured ten others.

Hill was in a group of soldiers walking to the range, which is outside the main camp. A soldier is believed to have stepped on the pressure plate of a bomb, detonating it. Amid the confusion, it is claimed, a second bomb planted close by had also gone off, killing Hill.

If the location is different, the tactic of using primary and secondary bombs to maximise casualties, is precisely that which has been used to such devastating effect at Sangin. And if a technique works well in one location – from the enemy point of view – then it will be used elsewhere.

Nor, frankly, should the attacks have come as a surprise. We pointed out earlier the well-worn truism that guerrillas operate to a well-defined pattern, part of which is that they will probe for the weakest spots and exploit them.

The inevitable consequence of this is that, no sooner does the Army manage to suppress activity in one area, the enemy will re-appear elsewhere, its aim as always to kill and injure coalition soldiers with a view to weakening the resolve of the home front.

Here, then, we have a direct conflict between the McChrystal "strategy" of protecting the people – even if it means putting troops at risk to do so – and Taleban strategy of maximising troop casualties. If the coalition intends to pursue the McChrystal strategy, it will become a race against time as to whether it can prevail before the weight of casualties turn public opinion irrevocably against the campaign.

In this, the Taleban's advantages are the Army's slowness of response and its seeming inability to think ahead and pre-empt their next moves. This "institutional inertia" is an almost unavoidable feature of a lumbering, bureaucratic entity – and that is primarily what any modern army really is. A nimble enemy can invariably outwit and outmanoeuvre such a machine which, for all its size and sophistication, is surprisingly vulnerable.

Thus, while the Army sees "boots on the ground" as its greatest asset, the Taleban see not soldiers but targets. Still, though, the British high command is wedded to the idea of sending more troops to theatre and is complaining that the 500 uplift proposed – which is to be formally announced on Wednesday – is not enough.

Some of those troops, it is rumoured, are destined for Sangin, to deal with a threat that was rampant in the earlier months of this year. Others, no doubt, will have to be assigned to base protection at Bastion, to meet the newly emerging threat there. In time the Army will deal with that threat and contain it. But, by that time, the Taleban will have moved on to exploit another vulnerability.

This is a battle the British Army cannot win – as long as there is no tolerance on the home front for continued losses. Gen Sir David Richards, the newly-appointed CGS, recently spoke of the drumbeat of casualties, claiming that that "the Army was ready to bear the sacrifice".

It is interesting how the people who do not have to bear the direct personal brunt of the consequences of that "sacrifice" are so sanguine about bearing it but, that notwithstanding, the evidence is that the population at large is less inclined to allow it.

Unfortunately, "institutional inertia" may well ensure that it has no option in the short-term. But public opinion has an inertia of its own and, once set, it is very difficult to change. Then, the "drumbeat" will have to assume a different tempo.