AFPAK in the House 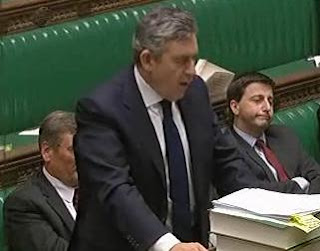 For those that might otherwise complain about the parliament in Westminster being marginalised, prime minister Gordon Brown did at least reserve the official confirmation of what had been widely forecast – an increase in force levels in Afghanistan – for an official statement in the House.

In what is going to have to be a series of posts, we will first summarise the statement in this post. In another post, we'll look at the media response and then we'll pick up on how the politicians responded, in and out of the House.

Starting with the statement, Brown also took the opportunity to give a broader overview of the mission and its progress: about the work with the government of Pakistan to counter the terrorist threat from al-Qaeda and the Taleban; our priorities for Afghanistan in "the next stage" of the work our armed forces and civilians are undertaking there; and the conditions set for that stage, including for the best possible protection of our troops, especially against the growing threat of IEDs.

Before so doing, he reiterated the reason for all this endeavour: to prevent al-Qaeda launching attacks on our streets. Three-quarters of the most serious terror al-Qaeda plots, he said, have roots in the border and mountain areas of Afghanistan and Pakistan. Sustained pressure on al-Qaeda in Pakistan combined with military action in Afghanistan was having a suppressive effect on the organisation.

However, he told us, if we limit ourselves simply to targeting al-Qaeda, without building the capacity of Afghanistan and Pakistan to deal with terrorism and violent extremism, the security gains would not endure. So we were seeking to build and support the Afghan army and police and to work with the Pakistan security forces. As an overarching objective, we are also seeking to promote a peaceful and stable Afghanistan. That would be a strategic failure for al-Qaeda.

The strategy, therefore, is dedicated to counter-insurgency and then to "Afghanisation" of the mission.

To help out Pakistan, we are giving another £10 million, to add to the £22 million already provided for humanitarian assistance for areas recently liberated from the Taleban. Then, in Afghanistan, the "strategy" which starts with training, mentoring and partnering the Afghan army and police would be speeded up. The more that the Afghans can take responsibility for security, the sooner our troops will come home. The immediate target is to build up the Afghan army to 134,000 by next October.

The Afghans are to set up a corps headquarters in Helmand and British forces will be ready to partner 5,000 of the 10,000 Afghan troops being trained by the coalition in Helmand over the next few months. This is not just a case of embedding mentors with Afghan units, as has been done in the past, but working integrally right up to the top of the command chain. In future operations, the protection of populated areas must be the shared responsibility of Afghan and coalition forces.

To meet the changing demands of the campaign, which require greater concentration of our forces in central Helmand, the regional battle group for southern Afghanistan (500 troops) will be redeployed from Kandahar and the new force level has been agreed at 9,500, subject to three conditions.

The first is that a new Afghan government demonstrates its commitment to bring forward the Afghan troops to be trained and to fight alongside our forces. The second is that every soldier and unit deployed to Afghanistan is and must be fully equipped for the operations they are required to undertake. The third is that the international coalition bears its fair share of the burden.

As to the elections, the process in train must be allowed to run its course but, when a new government is formed, the international community, including Afghanistan's neighbours, must develop a contract with the new government that includes the commitment to growing the Afghan army; tough action on corruption; a more inclusive political process, including reaching out to the reconcilable elements of the insurgency; and stronger Afghan control of local affairs.

A better future for Afghanistan, with its village and rural population, Brown then averred, can only be forged if there is stronger governance right down to district level. To that effect, the number of civilian advisors has been doubled. Furthermore, they are supporting not just Governor Mangal, but district governors and village shuras. The Afghan government is now functioning in nine out of 13 districts, compared with five last year, and we are supporting community councils to consult with thousands of local people.

An extra £20 million for the stabilisation work in Helmand is already being disbursed - to increase the number of Afghan national police in Helmand by 1,000 a year for each of the next three years and to build a new police training academy and new facilities for district governors. We are also working with coalition partners to extend such support to the 34 provincial governors and 400 district governors right across Afghanistan.

And, to complete the package, Brown told us that British aid will continue to help to pay the salaries of teachers and doctors, and we are also ready to fund and partner the first Afghan teams sent for stability purposes from Kabul to work alongside us in Helmand.

In short, apart from the troop uplift, there is very little in the package that we had not heard before and, as we noted, even the extra 500 troops had been widely signalled. Clearly expressed, though, was the "conditionality". The Army is not being given a blank cheque. However, with the redeployment of the theatre reserve into Helmand, that will eventually put two extra battlegroups at the disposal of Task Force Helmand.

How the media have responded in general, we'll look at in another post, but it is worth noting that The Guardian is reporting a suspension of hostilities between the politicians and the military. CDS Sir Jock Stirrup and the CGS, Gen Richards, have both "enthusiastically endorsed" the package.

"Our objective, as part of the 42-nation coalition in Afghanistan, is to reduce the terrorist threat to the United Kingdom," says Stirrup. "We do this by assisting the Afghans to spread enduring governance to parts of their country that have in the past, and would in the future if abandoned, harbour and provide support to terrorist groups." Richards, on the other hand, says: "This is the right decision and it reflects the … advice the prime minister has received since the summer."

If the package works as well on the Taleban and al-Qaeda as it does our own military, we might just get somewhere.