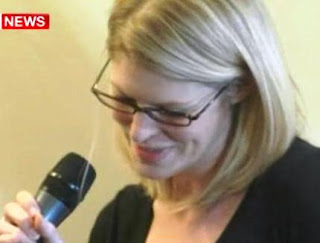 The media, predictably, made great play of the intervention of Flight Lieutenant Victoria Anderton in the question session after General Stanley McChrystal's address to the International Institute for Strategic Studies.

"I'm actually going out to Kandahar to serve with the Tornado GR4s next year," she told the general, "and can I say how much more confidence I have now in my chain of command than I had after Prime Minister Gordon Brown was here a couple of weeks ago? " She then went on to thank him for his determined assurances that the campaign could be turned around and asked him if he was confident that he could transmit that attitude to Mr Brown and President Obama.

Whatever happened to "apolitical" one might have asked, that honourable tradition in the British Armed Forces, where serving members of the military do not discuss politics in public? Anderton might have enjoyed her brief notoriety but, with her pointed and highly political comment, rode rough-shod over a convention for which the military is rightly respected.

More to the point, it was a facile intervention from a young lady who did nothing more than demonstrate her own ignorance of the politics of an issue that is growing in complexity by the day.

McChrystal, of course, is a politician and, while wearing the uniform of a US Army general, his appearance in London was a highly political act, reinforced by later meetings with Gordon Brown and the leader of the opposition, David Cameron. He has a political case to make, one which is taking centre stage in Washington, where the issues have are being debated hotly and have yet to be resolved.

And, while Flt-Lt Anderton might be "confident" in McChrystal's analysis, there are many who are not. Three of those yesterday gave evidence to the US Senate foreign relations committee. All three warned of the failure of other countries' attempts to deal with Afghanistan in the past - including occupations by the Soviet Union and Britain – speaking against the McChrystal plan.

The first, Milt Bearden, is a former Central Intelligence Agency station chief in Islamabad. He spoke of the Soviets who had spent ten years in Afghanistan, with an average troop strength of 120,000. It was never, ever was enough to defeat that insurgency.

Bearden's view was that there would always be enough ethnic Pashtuns who viewed any foreign force as an occupation and who would engage US troops on the battlefield. "There is no, in my opinion, there is no possibility for the United States to provide enough troops in Afghanistan to pacify the situation," he said.

Another expert at the hearing, Maleeha Lodhi, a former Pakistani ambassador to the US, also said that a military escalation would be unlikely to succeed and would intensify rivalries in the region, such as the one between India and Pakistan.

Other negative consequences of a military surge could be an influx of militant and al-Qaida fighters into Pakistan. Furthermore, it could enhance the vulnerability of US and Nato ground supply routes throughout Pakistan, and would likely mean more Afghan refugees pouring into Pakistan. "It could endanger, erode and unravel the key public consensus that has been achieved in the past one year to fight the militancy," she said.

In his evidence, Steve Coll, President and CEO of The New America Foundation, suggested an alternative. The coalition should make it would make clear that the Taleban will never be permitted to take power by force in Kabul or major cities, he said.

"It would seek and enforce stability in Afghan population centres, but emphasize politics over combat, urban stability over rural patrolling, Afghan solutions over Western ones. And it would incorporate Pakistan more directly into creative, persistent diplomatic efforts to stabilize Afghanistan and the region," he added.

Under the chairmanship of John Kerry, these invited witnesses are obviously partisan, but it is not only Kerry's "chosen few" who are questioning McChrystal's megalomania. Published by Small Wars Journal, we have Mehar Omar Khan, "a Pakistani infantry officer who may soon end up being another name on an ever-growing list of the fallen soldiers in the war against terror".

Khan writes an impassioned plea for a different kind of strategy, under the title: "Don't Try to Arrest the Sea." What we are facing in Afghanistan is a "Pashtun Intifada". It is only "led" by bearded mullahs calling themselves "Taleban". Take out the Taleban and the insurgency will continue, he says.

While Gen McChrystal has his own agenda, he does, however, welcome the fact that there is a political debate underway, venturing the opinion that, even though it was taking time, the consequences of making a wrong decision were such that it was better to talk through the issues than rush into making a mistake.

The idea of a debate, though, was clearly above Flt-Lt Anderton's pay grade, with her having already decided to buy into the general's pitch. So too, it seems has UK foreign secretary David Miliband, who is urging Obama to "back his general", to a chorus of uncritical approval from Robert Fox of The Guardian who is accusing the US president of "dithering".

Nor indeed is the leader of the opposition expressing any concern about the general's line – which is hardly surprising since his shadow defence secretary seems to have bought into it. Mr Cameron, we are told, is ready to set up a "war Cabinet" to deal with the Afghan conflict if he wins the general election – thus displaying, perhaps, a fundamental misunderstanding of the nature of the conflict. It is not a "war", as such, but a counterinsurgency, for which – it is rightly held – there is no military solution.

"Our military is at war in Afghanistan, but quite frankly, Whitehall isn't," says Cameron. But the fact that the military seems to be running the show, and considers itself "at war" is actually part of the problem. This is another person who does not seem to have been thinking it through.