Bribing our way to victory 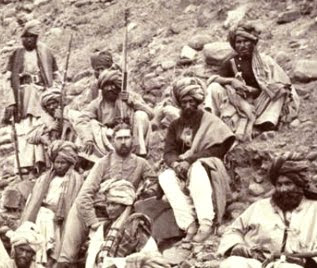 Much shock and indignation is attendant on the revelation in The Times that Italian forces in charge of the Sarobi area, east of Kabul, had been "been paying tens of thousands of dollars to Taleban commanders and local warlords to keep the area quiet."

This has come to light after the incident last year when ten French soldiers were killed in an ambush by Afghan "insurgents" in what was thought to be a relatively peaceful area.

It is reported. however, that the Italians hid the existence of these payments from the incoming French forces. Thus, no further payments were forthcoming after the departure of the Italians. Haji Abdul Rahman, a tribal elder from Sarobi, recalls how a benign environment then became hostile overnight. But, with the French unaware of what had been going on, they made a "catastrophically incorrect threat assessment", sending out lightly equipped patrol into the area, with the tragic result recorded.

What is perhaps best demonstrated by this affair, however, is the fact that the Italians were able to "buy" peace in the areas under their control, and that this was maintained for as long as, but only for as long as, the payments were forthcoming.

So, while The Times is reporting that, once the US discovered that payments were being made, they made a diplomatic protest to Silvio Berlusconi's government in June 2008, this was perhaps entirely the wrong reaction. A more intelligent response might have been to investigate how, and under what circumstances payments were made, and then to replicate what seems to have been a highly successful pacification strategy.

The use of bribes or "allowances" has, in fact, been a long-standing instrument of political control in this region and, indeed, we made reference to its use in our earlier piece, where we recalled the insurrection led by the Faqir of Ipi.

Author Milan Hauner noted that the British had paid allowances in cash to tribal maliks which for the year 1940 amounted to nearly one million Rupees for the whole Tribal Territory spanning what is now the Afghan-Pakistan border. While these payments were theoretically for services rendered, Hauner notes that Wazirs and other Pathan tribes came to the conclusion that the shortest cut to lucrative allowances was not through loyal service, but by occasional demonstration of their nuisance value.

The thrust of this observation was picked up recently in another piece in the context of contemporary suggestions that bribing the Taleban could again bring peace to the region. Author Martin Parsons noted that the Pushtun (Pathan) tribes had been given muwajib - an "allowance" - to live peacefully. They accepted the allowance, claimed Parsons, then a year or so later rose up against the government until they received another allowance.

Parsons may, however, be misunderstanding the position, and certainly the nature of the mawajib allowances. It is certainly the case that ad hoc payments had very little lasting effect, but it also appears that the system of payments did continue and became highly formalised – to the extent that, on partition, it was adopted by the Pakistani government and became one of the primary mechanisms of control in its Federally Administered Tribal Areas (FATA).

According to this source, there was a structured system which comprised in the first instance the maliki. This was a hereditary allowance to the head of a tribe, paid subject to "good conduct" of the heir of the Malik (head of the tribe), and approval of the government.

There was also the lungi, a personal allowance for individual service, which could be modified on the death of the lungi holder, and then there were the mawajib allowances which were paid to the entire tribe biannually. In other words, these were continuous payments, the purpose of which was "to maintain amicable political relations with the tribes, to bind them to the government of Pakistan by excluding other 'influences' and hence outside interference in the area."

Interestingly, the maliks and elders who received allowances for a tribe/section were perceived as the political medium and were required to restrain and control their tribesmen from committing any act hostile or subversive to the state – exactly the purpose for which the Italians paid their "bribes" to the Taleban.

To a very considerable extent, this system seems to have been successful up and until the Soviet invasion of 1979, before which the threat had been neighbouring Afghanistan. Its governments had been hostile to the creation of Pakistan and were blamed for assisting and abetting Pukhtan (Pashtun) demands for a separate homeland for which the term "Pukhtunistan" had been coined. Thus, the Pakistan government sought to counteract Afghan propaganda and influences with the help of those who received allowances, namely the maliks and elders.

What appears to have broken the system was the Soviet invasion. Quite how devastating the breakdown was is recorded in great detail in a PhD thesis by a Pakistani researcher, available from the Pakistan Research Repository. The effects were later to bring Dr Christian Tripodi, writing for RUSI to conclude that the colonial model of laissez faire administration no longer had any lessons for us.

The flood of radical elements into that region during the Afghan-Soviet war since 1980, he wrote - a trend that has only accelerated since the coalition invasion of Afghanistan in October 2001 - and the increasingly ambitious political agenda of certain of those elements has only highlighted the weaknesses of what is to all intents and purposes the British colonial system, in the face of a radically changed strategic environment.

Even more recently though, Fred Kaplan has reactivated the debate, asking whether we can bribe our way to victory. For certain constituents, he writes, such as officials and tribal chiefs, a barrelful of money fits the bill - and could ease the path for letting us, or the central government, pursue more broadly appealing programs, such as building roads, providing jobs, and sowing crops other than poppies.

The idea, he notes, may seem outrageous, until one considers that we're currently spending about $4 billion a month on this war. A discreet and well-planned bribery program would cost pennies on the dollar - a mere rounding error in a calculation of the budget.

Outrageous it may seem, but what might one ask are the subsidies paid by the UK government to the outlying regions of Wales and Scotland, and the massive payments made to Northern Ireland, if not "bribes" by any other name?

It is difficult to find any firm evidence of a structured system of allowances or "subsidies" paid in the main areas of Afghanistan, although this report suggests that allowances of the nature suggested by Kaplan have long been a central part of the governance of the country.

And, with our own government recently announcing a £12-million scheme to fight working-class "extremism" in Britain, it might not be untoward to suggest that the Italians, in spending a somewhat smaller sum to counter "extremism" in their own sector of Afghanistan, were not altogether misguided. Their only mistake, it would seem, was in not telling the French.