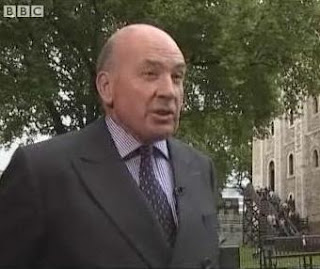 Given the intensity of the strategic debate on Afghanistan being conducted in Washington, the "Dannatt affair" over here is actually something of an unwelcome distraction, occupying more space in the media than it actually deserves.

However, The Guardian adds to the sum of human knowledge by pointing out a discrepancy between Cameron's speech text and his actual delivery, when he referred to Gen Dannatt's position in the House of Lords.

In the text, Cameron suggests that Dannatt "will join our benches" but the words spoken were merely that he would "sit in the House of Lords". He still goes on to say, though, if we win the election Dannatt "can" serve in a future Conservative government, so there is not an enormous practical difference.

Nevertheless, The Guardian takes this as a reflection of the growing unease being expressed in the senior ranks of the military, said to include the current CGS, Gen Sir David Richards, and General Lord Guthrie, a former CDS, who advised him not to take the Tory whip. "If he's going to the House of Lords, it's best to be a crossbencher," he says. "I will give advice to anyone, Labour or Conservative but I wouldn't want to be associated with any one political party."

Guthrie's views are given some prominence in The Daily Telegraph, which also records that Dannatt's appointment "has raised concerns about the political neutrality of the Armed Forces."

One senior Conservative MP is also said to be alarmed. "It's a mistake. It breaks some of the fundamental rules about defence, and it may be politically dangerous as well." Added to that, the shadow cabinet also seems to have expressed concern after Cameron, apparently, failed to consult key members of the frontbench defence team. Gerald Howarth, the shadow defence minister, was said to be angry after he learned about the appointment from a journalist.

Liam Fox, the shadow defence secretary, who was consulted about the move, had private misgivings, not least because Dannatt had been expressing to friends a desire to become defence secretary. Cameron later quashed speculation that this might happen by confirming that Fox would take the post if the Tories win the election.

From the Labour benches, Lord Foulkes, a Labour peer with a less than shining reputation, accused Dannatt of working "hand in glove" with the Conservatives and of being a "political stooge", forcing an intervention from William Hague to defend him.

This had followed mistaken criticism from shadow home secretary Chris Grayling, the Tories' "attack dog". Also uniformed by Cameron and thinking that Dannatt had been appointed as a government advisor, he had said: "I hope this isn't a political gimmick." He was "always suspicious of the government’s motives when it does things like this."

The implied criticism, quickly corrected when Grayling claimed he had "misheard" a question put to him by a BBC interviewer, nevertheless prompted a response from shadow chancellor George Osborne who defended the appointment saying that, it "shows an opposition that is taking very, very responsibly its preparations for government."

By then, the Tories' surprise announcement was beginning to look a little tarnished so defence minister, Kevan Jones, could afford to be relatively relaxed, simply observing of Dannatt that, "I always thought he was above party politics." Lib-Dem Sir Menzies Campbell responded with "profound disappointment", adding that "by convention, our senior military are non-political".

Media reaction was also mixed. While the Daily Mail "bows to no one" in its admiration of Dannatt, it feels "very queasy about his decision, within weeks of retiring, to serve under Tory colours." The paper tells us: "Generals, quite rightly, are meant to be politically neutral."

The Financial Times noted defence experts saying it was rare for a former CGS to go on to advise a political party in this way. The appointment, the paper said, "will raise concerns about how a Cameron government would manage policy in Afghanistan. Sir Richard could be advising a Tory prime minister alongside serving military chiefs whom he once commanded."

James Kirkup, political correspondent for the Telegraph took this point a little further, asking if, say, Gen Sir David Richards, the current CGS, advises one course of action and Sir Richard another, whose counsel will carry more weight?

Hinting at the reason why Dannatt – despite his public popularity – is so disliked in certain quarters, Kirkup also notes that, as CGS, Dannatt was party to a lot of controversial military decisions, all carefully minuted and documented. Some MoD people, he writes, "are privately seething that he has publicly criticised things that, they say, he signed off."

There is, in fact, even more to this. Some of the decisions for which Dannatt subsequently took credit he actually opposed. The operational allowance for combat troops is one of those. Dannatt was strongly against the idea, arguing that it was "devisive", calling instead for an across-the-board pay increase for the whole Army. Kirkup asks what might happen if those decisions start to come to light. His record in office must now be reassessed in the light of his new position.

As that starts to happen, as and indeed it will – Dannatt has made too many enemies for it not to – Cameron will find that his new recruit is a declining asset. Dannatt is already on the back foot, having to deny that he has been "plotting" for some time with the Tories. His current decision to join the Conservatives, he claims, was triggered by a direct invitation from Mr Cameron.

He said he had taken a two week holiday after retiring in August and was fishing in the River Spey, "when my BlackBerry burbled. It was David Cameron," he claimed.

Actually, things do not work that way. They never work that way in politics. A leader of the opposition does not make "cold calls" to prominent personages with offers of preferment, just on the off-chance that they might accept. Apart from anything else, it is far too risky. The "target" might not only refuse, but could leak details of the offer to the media, giving rise to some embarrassment.

With more leakage about his professional background, which will not be favourable, and doubts about his earlier relationship with the Tories, this, as one commentator in The Times suggests, "is the Conservatives' biggest mistake." Crucially, as we also suggested, it is "another sign of Cameron's lack of judgement."

And the scale of that lack is just beginning to become apparent. The Daily Mail is reporting that the "military top brass" are planning to tell Cameron they do not want Dannatt as a defence minister in a Tory government. A senior Army officer has contacted the paper to make clear the reservations about his new role.

This officer said: "The Army won't wear it if Dannatt is made a minister in the MoD. You can't have someone walking out of his office in a green uniform and then walking back in wearing a pinstripe suit to sit just down the corridor a few months later ... He has had his go. It would be quite wrong for him to come back and peer over the shoulders of his successor."

And, the "leakage" has already started. A "well-connected figure" is saying that, while frontline soldiers were fond of General Dannatt for speaking out publicly in their support - or so they think - senior officers were less appreciative. "Some of them sat in meetings with him and saw him outmanoeuvred repeatedly by the Navy and the RAF," the source said.

In one fell swoop, Cameron has upset some of his front bench and senior MPs, he has failed to consult the Army and is facing a "rebellion" from senior officers, and he has picked a loser. That, for a prime-minister in-waiting, could be a problem.