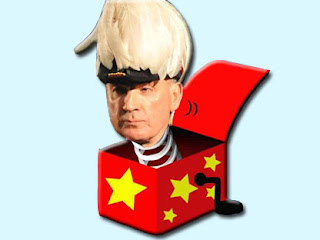 When the Strategic Studies Institute, part of the US Army War College, publishes a paper saying that the military have gone too far in the prosecution of war, and it is time to bring politicians back in the loop, it is time to sit up and take notice.

The paper, under the slightly whimsical title of "Alien: how operational art devoured strategy", is written by two Australians, Brigadier Justin Kelly and Dr Michael Brennan. It deals with what might seem to be an arcane subject – known as "operational art" - but this is a mainstream and important issue which strikes at the very root of the relationship between politics and the military, with direct and immediate relevance to the mission in Afghanistan.

The term "operational art" is almost certainly unfamiliar to those outside the narrow community of military theorists but is defined by the paper authors as the "thoughtful sequencing of tactical actions to defeat a component of the armed forces of the enemy." It relates to the development of inter-related and sometimes complex military actions, all designed to achieve a single effect, but, as the authors point out, the term has become misunderstood and mis-applied, with serious consequences.

The confusion, they argue, is in the similarity with a wholly different concept, the one carrying the much more familiar name of "strategy". That, narrowly defined, is the science and art of military command as applied to the overall planning and conduct of large-scale combat operations and, given the obvious similarity with what is meant by "operational art", it is unsurprising that confusion has crept in.

What has happened, argue Kelly and Brennan, has been that the term "operational art" has come to cover not just local tactical actions, battles or sequences of battles. It has been expanded to apply to campaigns and – in the "small wars" that tend to dominate modern warfare - the general conduct of those wars.

Consequently, they state, the term – or its application - has marginalised the role of politics in the direction of war. In particular, the idea of the campaign has come to overwhelm that of strategy, the former lying within the province of the military, the latter primarily of political concern, albeit developed as part of a "conversation" with the military.

Rather than meeting its original purpose of contributing to the attainment of campaign objectives laid down by strategy, operational art - practiced as a "level of war", has assumed the responsibility for campaign planning. In so doing, it has reduced the political leadership to the role of "strategic sponsors" and widened the gap between politics and warfare. The result, say Kelly and Brenna, has been a well-demonstrated ability to win battles that have not always contributed to strategic success, i.e., "a way of battle rather than a way of war."

The relevance of this issue is evidence from the recent behaviour of General Stanley McChrystal in offering what he termed a new "strategy" for the campaign in Afghanistan, then orchestrating a publicity campaign aimed at pressurising president Obama into providing the resources deemed necessary to implement it.

One sees, therefore, a general seeking to define strategy, with an attempt to relegate the politician to the role of passive "provider"- the "strategic sponsor" - taking no active part in formulating strategy but simply ensuring that such means as are demanded are made available.

A similar dynamic has been seen on this side of the Atlantic. Here, diverse military figures – most notably General Sir Richard Dannatt – have been demanding of the government more resources and increased troop levels. Yet they have not been willing to specify clearly the use to which they will be put, resisting what they argue is political interference in "operational" matters, which lie exclusively within the military sphere.

Against this artificial division – redolent of trades union demarcation disputes - Kelly and Brennan call in aid Clausewitz and his view of war as an extension of politics - "a chaotic process involving competing personalities (whose individual actions may indeed have a rational basis), chance and friction, and popular emotion." In a war, they argue, the actions of all of the protagonists are determined by this interaction of policy and politics. To isolate one from the other is to ignore a critical part of the whole.

The political leadership of a country, they say, cannot simply set objectives for a war, provide the requisite materiel, then stand back and await victory. Nor should the nation or its military be seduced by this prospect. Politicians must necessarily be concerned with the minute-to-minute conduct of war and today's plethora of military actions.

Thus political considerations are "influential in the planning of war, of the campaign, and often even of the battle." Clausewitz is then invoked once again, with his caution that multiple points of view - administrative, military, political - cannot be a basis for planning wars. The political perspective must be given precedence over everything.

What the authors of this remarkable paper do not deal with – and nor did they set out to do so – is the other side of the coin. While, through the mechanism described, the military have come to monopolise the strategic direction of war, quite deliberately excluding politicians where they can, to a certain extent this is also because the politicians are permitting it.

The increasing technology of war, the proliferation of jargon, the impenetrable acronyms and the emergence of the technocratic, professional "warrior class" on the one hand intimidate politicians - many of whom have had no military experience. On the other, the complexities of modern government and competing demands on time make it convenient to leave the war to the "generals", allowing the politicians to exercise a "hands-off" supervisory function.

Thus, if the application of military theory, expressed as "operational art", has had the effect of isolating politicians from the detailed management of war, politicians have themselves have contributed to the process. While Kelly and Brennan may argue that "the political perspective must be given precedence over everything", there is no evidence that the politicians are prepared to engage, to the extent that they are prepared to provide the political leadership.

That much may explain David Cameron's enthusiasm for appointing Gen Dannatt as his military "advisor" – soon to become defence minister – seen in the context of the absence of any original thinking from the Conservative party on how to conduct the mission in Afghanistan. Furthermore, the political retreat from strategy is being reinforced by the popular media which is taking the view that ministers should give the generals what they ask for. It is not for them to question, much less challenge "military advice".

Kelly and Brennan in fact refer to the aphorism that "strategy proposes but tactics disposes", considering it "valid", but remind readers that the strategic direction of a war needs to be intimately sensitive to the details of the warfare being conducted so as to ensure both that it is making realistic demands, and that the military action remains in keeping with the wider conduct of the war.

Where politicians are defining strategy, therefore, that requires of them an appreciation of the nature and utility of tactics employed, and a capacity to enter into a meaningful "conversation" with the military, most often in the glare of media scrutiny. Few contemporary politicians have demonstrated that capacity. Yet, devoid of political input, we end up with tactical action without strategic purpose. And that, observe the authors of the paper, is merely "senseless violence".

When a defining moment in the Afghan mission came with the announcement that British troops had expended a "million bullets" – and since have expended many more millions – without any indication that the mission is being successful, we are left with the impression that that is all we are achieving.

As we observed earlier, for things to change – if that is possible – the generals need to be put back in the box marked "tactics" and the politicians need to reclaim strategy from the grip of "operational art".