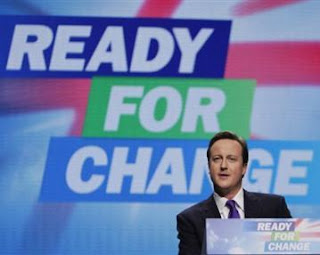 Said David Cameron today in his closing speech to the Conservative Party conference, "When the country is at war, when Whitehall is at war, we need people who understand war in Whitehall."

This was a prelude to the opposition leader formally announcing that General Sir Richard Dannatt was to become a Conservative defence advisor and would join the Tory benches in the House of Lords. If the Conservatives won the election he could then serve in a future Conservative government.

Of Cameron's prelude, it is difficult to say whether his bald statement that "Whitehall is at war" was simply sloppy phrasing and therefore accidentally ambiguous, or deliberately so. Did he mean that "Whitehall" was at war with itself, or with – presumably – the Taleban?

The distinctions are by no means spurious – witness a piece by Michael Evans on the subject of Dannatt in The Times, headed "Fight this war in Afghanistan, not Whitehall".

In his text, Evans freely refers to the "battle" between military and politicians, which is also raging on the other side of the Atlantic. This side of the water, it is generally acknowledged that there is not only a "battle" between military and civilians, but also between the different branches of the Services, and even within the Army, as it tries to get to grips with the conflict in Afghanistan.

Whatever expectations Mr Cameron might have of Gen Dannatt, however, they are likely to be unfulfilled. Had Dannatt been more skilled at fighting the "war" in Whitehall, perhaps he would not have felt it necessary to appeal to the media in an attempt to win his battles. As it is, he lost the confidence of ministers and, according to some of his military peers, set back the cause of the Army.

For the "Tom" engaged in a "contact" with a group of fighters awarded the generic name “Taleban", the distinction might seem academic. But it is far from so being. That much Gen McChrystal got right. In a war, the focus is on the destroying the enemy and capturing territory. In a counter-insurgency, it is on the people, with the objective of convincing them that they should support the government of their country.

The fundamental difference here is that the prosecution of war is primarily the function of the military. The civil power takes the back seat. The counter-insurgency is a politico-military endeavour, which works best when there is a political lead and the military acts in support of the overall political plan. The military should take a secondary and subordinate role.

Relying on a man such as Dannatt, on advice on how to fight a "war", therefore, is not exactly a winning formula. There is a fundamental error of perception here – and one which, if it continues to dominate our thinking, will ensure our eventual failure.

This is an error, incidentally, to which I have been prey. And I freely admit that I have been in error, treating and discussing the counter-insurgency there as if it was a war, reporting and analysing it as if it was a military campaign. We are not at war. This cannot be over-emphasised. There is no "war".

In making this error, I am far from alone. We see daily in the reportage, the heavy emphasis on the military action and it is the view of the generals on the conduct of the "war" that predominate.

Of the civilians on the ground in the theatre, we scarcely know one, and in media terms they are invisible. Yet this should not be so. The civilians should be up-font, making the key decisions, with the Army clearly seen as supporting the civil authority. Where, as is currently the case, the public face of the campaign wears uniforms and carries guns, it is unsurprising that the Afghans think we are at war – with them.

Interestingly, in one of the many articles discussing Afghanistan in the Washington Post, reference is made to "executing and resourcing an integrated civilian-military counterinsurgency strategy."

The order of words is all-important - "civilian" comes before "military". And then, of course, there is that word "integrated". As it stands, the order is reversed and the two activities are very far from integrated. Therein lies our problem. To make a difference, as we noted recently, the politicians need to re-assert their primacy and put the generals back in their box.

Mr Cameron today did no such thing. He simply perpetuated the error which has dogged the campaign, and backed the wrong horse. Despite his slogan, it seems that he is not ready for change.