If the snow comes early 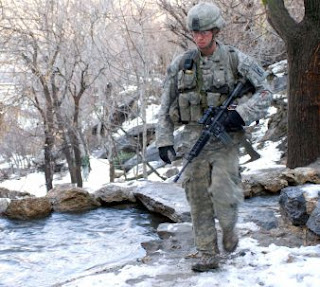 As we move into the next phase of the charade that is the Afghan presidential election, not a few commentators are pointing out that 7 November, the date chosen for the run-off, brings the country perilously close to the winter season, when many areas of the country could be socked in by snow.

Even without that, Ben Farmer in The Daily Telegraph points out that the run-off will be a "logistical nightmare". A fleet of 3,500 trucks will be needed to carry voting materials to the polling stations and 3,000 donkeys to get people to remote areas.

Afghanistan's 94,000 soldiers and 84,000 police, backed by 100,000 Nato-led forces, will be on duty to protect polling stations, but hundreds more will be judged too dangerous to open.

Tom Coghlan in The Times goes further, calling the run-off a "race against time", noting that the election organisers are "taking a big risk" that this year's snows will not arrive early – as indeed they have in Tibet. Typically, he writes, the upland areas of the country are frozen and snowbound by mid-November, though these are areas of low population density.

The 10,000-odd voters in the remote Wakhan Corridor — a finger of territory that reaches out in the north east to the remote Chinese border — are already under snow and cut off until the spring and the central highlands are also receiving their first snowfall. 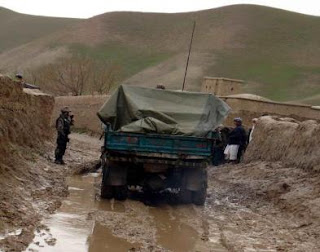 Coughlan adds that, in the south the threat will be less from the weather than the risk from the Taleban, although even in the southern provinces there could be problems. Winter rains turn roads into quagmires, gentle steams become raging torrents and water-fed wadis turn into glutinous mud which defies the passage of even the most powerful off-road vehicles.

As problematical is the low cloud and the mists which descend on the mountains and hills, obscuring vision and, crucially, neutralising airpower and hampering helicopter transport and fire support.

By way of compensation, rebel mobility is also affected, particularly as snows clog the Pakistan infiltration routes – although they are less affected than the technology-dependent coalition forces.

However, if the weather may be problematical for the Afghani run-off, the situation Wazirstan for the Pakistani Army is altogether more serious. Having left their offensive very late in the season, the only hope of a decisive action comes with rapid progress, before the snows fall and bring campaigning to an effective halt.

With no media presence in that region, information is sparse, but already we are getting dark hints from the army command that progress is not as rapid as they might have liked. And one report suggests that the Pakistani Army, dominated by recruits from the Punjab, is ill-equipped for mountain warfare in snow-bound condition. "The present fight to finish must be really finished before the first fall of snow," it says.

Syed Saleem Shahzad of the Asia Times is also pessimistic, stating openly that the chances of a decisive military victory "remain remote".

Given the nature of the opposition and the tough territory, he writes, there is a high probability of extensive casualties in the army, with resultant desertions and dissent. There is also no guarantee that if the conflict drags on, the warlords with whom ceasefires have been agreed will not go back on their deals.

At the same time, he warns, there are signals that the Taleban in the Swat area are regrouping after being pushed back by the army this year. It is likely that by the time the snow chokes major supply routes, the Taleban will have seized all lost ground in the Swat Valley. He adds:

Shazad concludes that, in this situation, in which the militants and the military can't defeat one another, and if the fighting continues, a political crisis could be provoked. This would weaken the state of Pakistan and its institutions. Alternatively, he suggests, the authorities could accept the fact that Pakistan is a tribal society which always operates through bargains and deals, and move quickly to contain this conflict.

That, of course, it also the option available in Afghanistan. Any which way you look at it, the re-run is going to be an indecisive shambles, a charade played out for the benefit of the "international community" to which, largely, the Afghans themselves are indifferent. With or without western "assistance" the tribal society of Afghanistan will have to resolve the situation with "bargains and deals" but, for the moment, the man in the driving seat looks to be General Winter. He may well be calling the shots.