Two steps forward and one step back 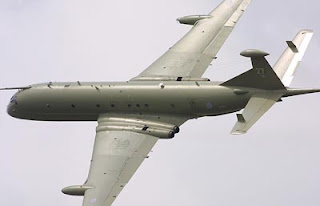 It is interesting that, despite Mick Smith's attempt to pin the blame on No 10, and the Today programme's attempt to broaden the issue out to encompass the wider defence spending "crisis", the media focus on yesterday's Board of Inquiry Report on last year's Nimrod crash has been more on the MoD and the RAF.

Thus we see the BBC headlining, "Pilot's wife blames MoD for crash" while the Press Association via The Guardian retails, "Father calls for RAF chief to quit". Says Graham Knight, the father of one of 14 servicemen killed, the findings from the MoD's board of inquiry proved the RAF "betrayed" his son.

However, it is The Times which takes possibly the most political line, reporting the defence secretary apologising to the families of 14 servicemen who died, calling it an extraordinarily contrite statement.

This, we are told, brought a Conservative response – from Gerald Howarth - that the fact that the 37-year-old aircraft were still likely to be flown for at least another four years was "nothing short of a scandal". Strangely enough, later, on BBC Radio 4's The World Tonight he put much of the blame on BAE systems, for the technical delays in building the replacement MRA4 - perhaps a tacit recognition that the aircraft was ordered by the Conservatives in the first place.

The Telegraph largely confines itself to the findings of the report, but adds the expected "spin" with, "Nimrod report blames ageing aircraft for crash". It notes that the inquiry had found the age of the aircraft and its lack of fire-fighting equipment were "factors" leading to the crash.

Predictably, therefore, the paper adds that the report has put the Government under intense pressure over defence spending "by highlighting the deteriorating condition of the ageing spy planes."

However, the BOI actually considers that the "probable cause" of the accident was fuel venting from the aircraft's number one fuel tank (or possibly leaking) and "coming into contact with an exposed hot air pipe in the No 7 tank dry bay towards the rear of its starboard wing."

Crucially, as highlighted by Flight International, the RAF "confirms" that this risk had been identified during flight testing of the cancelled Nimrod AEW3 airborne early warning aircraft in the mid-1980s. No corrective action was taken on the MR2 fleet, something which the BOI describes as "particularly disturbing".

What is perhaps most significant here is that this is at least as important as any problems associated with ageing (which are cited only as contributory factors). The suggestion here, if I have read it right, is that the primary cause of the explosion was a pre-existing design fault.

From a political perspective, if there was an opportunity to correct that fault, it was when it was first detected, and that was on the Conservative watch.

Ministers, though, cannot reasonably be expected to keep an oversight of technical issues relating to the airworthiness of aircraft – that is what the MoD employs experts for – and no politician could be expected to second-guess technical decisions made by experts. But those who wish to make political capital out of this incident need perhaps to be aware that overall responsibility for this crash possibly spans both the Conservative and Labour periods of office.

Nevertheless, that does not stop people like Robert Fox in the Guardian's Comment is free, airily declaring that "the crash that killed 14 RAF personnel was a preventable tragedy," adding that, "What aircrews know is that the Nimrod is so aged as to be scarcely airworthy".

Well, that is the legend. That is what some people want to believe and that is what they will take out of the report, no matter what else it says.

But what again, predictably, no one addresses is that issue which we have raised in so many earlier posts – why Nimrods were being used for a function that could so easily be provided by other aircraft or assets like UAVs.

There, the issues are complex and, although I take an assertive stance on them, they are not always black and white. But they are issues which need to be discussed: unless we somehow curtail the rampant inflation in military costs, low-tech enemies like the Taliban can force us into a spiral of spending that eventually makes war too expensive to fight.

Here, at least, beyond the speculation about the cause of the crash – much of it wrong – there was an opportunity to discuss these wider issues. But, once again, to no one's surprise, the media has gone for the easy shots, and left the greater debate hanging. And if over the next few days, the issue simply fuels the simplistic mantras of "overspend" and "under-resourcing", we will have taken one step forwards and two steps back.