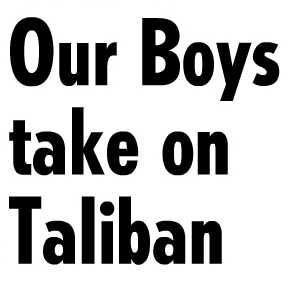 If The Sun is to be believed, the long-expected battle for Musa Qala has started, with the newspaper reporting, "The epic battle for a Taliban stronghold erupted yesterday as British troops engaged the enemy." It adds that, "The fight to topple fanatics who have had ten months to dig in at the fortress at Musa Qala is expected to be one of the fiercest battles of the Afghan campaign."

AFP is more cautious, its latest report simply retailing, "Tensions rise in Taliban-held town", telling us that, "Residents of Musa Qala … said Friday they were bracing for military action to wrest it back from Taliban militants, but officials were cagey about what was happening."

Certainly, the indications are that there are what might be described as significant preparatory operations, with one resident of Musa Qala telling AFP by telephone that troops had fought with Taliban about six kilometres from the town, early today. This was Mohammad Nasir, who said, "The foreign forces are always driving up and down in armoured military vehicles around the town and helicopters are flying over head. We are scared about what is going to happen."

Needless to say, the MoD website is totally silent on whatever operations are being conducted, reflecting no doubt the tension between the need to maintain operational security and the equally pressing need to keep people informed. As usual, though, the Ministry is erring on the side of excessive caution, which means that it is out of the publicity game for the time being, leaving the running to the media – which is largely ignoring the developments.

However, in many ways, a successful push on Musa Qala could be the turning point of the Afghanistan campaign and is one, therefore, that has considerable importance. And since the Taliban clearly have some idea of what is going on, and what fate lies in store for them – as indeed do the inhabitants of Musa Qala – one might have thought the MoD could at least share with us what is already in the public domain.

On that basis, when it comes to projecting the role of the Armed Forces, the MoD is once again failing to do its bit. With a website that seems more concerned with corporate PR than giving out real information, once again it is letting the side down. And, if it can't at least keep us informed, how can it possibly complain about the media?