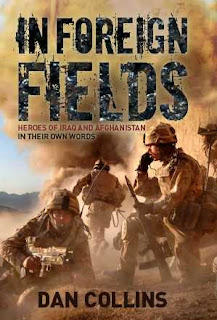 It's been done before, but it is still a clever idea – an anthology of interviews of military men, describing their wartime experiences. In this case, it is 25 medal-winners from the campaigns in Iraq and Afghanistan, assembled under the title In Foreign Fields by Dan Collins, writer and former journalist, who freely admits that he "has never fought a day in his life".

His lack of military experience, however, does not hinder the enterprise. Collins does not seek to impose his own personality on his subjects and lets them talk freely, describing their own experiences, subject to only the lightest of editing. The hand of the author though, is present throughout, as he frames each interview in a coherent structure, deftly interwoven with extracts from each of the medal-winners' citations.

Of the twenty-five, it is impossible to pick favourites. Every one of the accounts is riveting and unique. Not in any order, therefore we pluck Lance Corporal Dickson, MC., a Territorial Army soldier deployed to Iraq. He was caught in an ambush while riding an open-topped Land Rover, part of an escort for a convoy of water tankers driving through Basra.

Braving a withering hail of fire, IEDs and RPGs, he stayed at his highly exposed post in the back of the Land Rover, even after being wounded. Mind you, such is this man's Army that, after taking a round that went in through his rear deltoid and followed a track down his rib cage, lodging in his back, his Sergeant told him to get back to his post and "…stop being a lazy sod!". No mummys' boys these!

Then we have Major Mark Hammond, something of a rarity – a Royal Marine Chinook pilot. He led the Immediate Response Team and Quick Reaction Force in Helmand, based in Camp Bastion, his duties including taking medical teams out to evacuate casualties, flying in to "hot" landing zones in often perilous conditions.

With understated bravery, Maj. Hammond is "mega-impressed" with his surgical team. "It's easier for us flying the thing (helicopter)," he says. "They have to sit in the back watching the rounds go past the window and there's nothing they can do".

After one aborted mission, when the fire was too heavy for Hammond to bring his helicopter into a landing zone in Musa Qala, he returns to Camp Bastion (his machine is found to have four bullet holes in vital parts) and has to break the news to the surgical team. He takes up the story:

I remember, we came off the cab and the medics were all sat down the back. Their boss was a colonel – he was pretty ashen-faced, and I had a smoke with him. We were sucking down this smoke, and I said, "You realise we are going to go back?" He took just about the longest drag I've ever seen, stubbed it out and said, "Yeah, I thought we might". And he just walked off. Immensely brave …

If understatement is a quintessentially British characteristic, then we also see this aplenty, but no more so than from Lieutenant Timothy Illingworth CGC. He is attached to the Afghan Army and, in contact with the Taleban and engaged in a ferocious firefight, he borrows an RPG, fires off a few rounds, and then, he recalls …

I got back onto my rifle, moving forward, identifying individuals if they left cover and shooting them if I could. I finished my magazine, went to change it and that's when I noticed no-one else was firing. I changed my mag – it was my seventh and last, which is an indication – and turned round. And there was not a soul in sight.

And when any one of us would be a cowering, gibbering wreck, he adds laconically …

Which concerned me slightly.

With the enemy only yards away, he works out that, as soon as he had stopped to change the magazine, it would only be a "matter of moments" before the Taleban worked out he was on his own. Then it was going to be "game over". Against such a horrendous possibility, Illingworth tells us that this was:

Quite a worrying moment.

It is impossible to do justice to the cool bravery displayed by these men and their comrades, even if Dan Collins does. For that alone, his book is an essential read, but Collins also allows each of his subjects to ruminate about what their awards meant to them, and their feelings about themselves. The narratives are often poignant, and revealing, especially Major Justin Featherstone, MC. Having led patrols into al Amarah at the height of the Mahdi uprising in 2004, showing quite extraordinary heroism and leadership, he praises particular men he worked with, and then turns to consider the rest: "But it's the ordinary Toms I'll remember most," he says…

I joined the Army for the privilege of commanding and serving with the best soldiers in the world. Because of my seniority, I am now in an instructing role at Sandhurst, and I will never have that opportunity to command men in battle again. That's what I will miss the most, to the point where I've actually decided to leave the Army. I don't want to sit behind a desk. I've no interest in the bureaucracy of that, necessary as it is. How can I spend my time worrying about my triplicate return for my motor mileage expenses?

That says so much, and speaks so much of the man. Dangerous it is, and full of tragedy, but for many, leading men in battle is the finest thing they will ever do. We are fortunate that we have such men, but it is a shame that, somehow, we cannot find a greater reward for them than a desk in some obscure corner of the Army.

Nevertheless, through Dan Collins and his magnificent book, we leave the last quotation to Major Featherstone. Ruminating that "people say that modern recruits aren't what they were", he delivers a pithy response: "Bollocks!"

This is a book to savour.