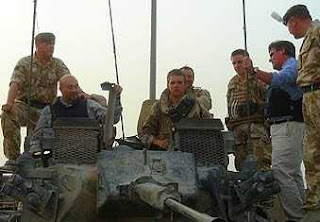 In a report published by the House of Commons Defence Committee, MPs have warned that the plan to establish security in the city of Basra, prior to handing over control of Basra to Iraqi forces, has been unfulfilled.

With the hand-over planned for Spring, violence against civilians is undiminished and the city remains in the grip of the militias and criminal gangs, with "serious questions" over the true allegiances of many police officers. While the Iraqi army had made "significant progress", the committee said it still needed back-up support from the British - particularly logistics and intelligence - to operate effectively.

The committee also questions the continued viability of the remaining British force, based at Basra Air Station, once its numbers are halved to 2,500 – which is planned after the hand-over. This is just about sufficient to maintain the functioning of the base and its own security (and then, only in a fairly benign security environment), leaving no resources for other functions.

In effect, with that level of manning, the primary function of the base is to function as a base, with little other purpose or capability – the ultimate "self-licking lollypop" as one military commentator put it to us.

However, at the same time, the committee is asking about details of how the UK intends to maintain a "re-intervention capacity" in case the security situation deteriorates, declaring that, if that capability is to be credible, troops will need to be drawn from outside Iraq.

Therein, at least, is part of the reason for maintaining the base. On the one hand, it denies it use by the enemy and, in that context, provides the "toehold" and portal through which reinforcements can be channelled.

As to the security situation in Basra, reports are sparse and difficult to come by, but what we have seen suggests that the committee is entirely correct in its assessment. What it does not say is that this represents – in our view at least – one of the more egregious failures in British foreign policy in recent times.

It would be easy to attribute that failure to the military, but only at a higher command level, with its reluctance to devote enough of the right kind of equipment to the task, and to impress on the politicians with sufficient force the need to provide sufficient resources for the task.

But, whatever failures there were, they cannot be seen in isolation. Continued troop presence in Iraq never attracted popular support, the government was always unwilling to provide the resources and – with an obvious lack of political commitment and public support – it is probably fair to say that the Army lost heart in a mission that it could not cope with.

It will be for future historians finally to get to the bottom of the issues which led to the failure but, in all probability, at its root will lie Tony Blair's policy of dividing his resources between supporting the US intervention and, at the same time, supporting EU military ambitions. Thus, at the same time the Army was committed to an increasingly drawn-out conflict, its financial and intellectual resources were being bled away into the European project.

With insufficient attention being given to winning the real, fighting war, the Army was on a hiding to nothing and, as time went on, failure reinforced failure until, probably by early last year, the situation had become irrecoverable without a massive injection of resources – which were no longer there as the Army was also committed in Afghanistan.

For the time being, therefore, the maintenance of a single base is probably all that is politically (and militarily) sustainable. Handing over to the Iraqis will be a huge gamble, and much will depend on the US success further north being exploited, with the central government eventually getting a grip of the southern province.

This could go either way, and will depend more on US goodwill than British. We have been relegated to the role of spectators, no longer in the game, even if we have not fully withdrawn from the pitch.

The oddest thing is that, since the Europeanisation of defence policy was never formally – or, at least, openly – acknowledged (and confused by and with the "future war" policy), it will take some time for the true role of the European Union to be understood.

But for those who argue that our membership of the Union has increased our influence on the global stage, the real effects have been to reduce our influence with the United States and our standing as a military power. For, however you dress it up, the final act of our occupation of southern Iraq cannot be regarded as a success.