Questions in the House 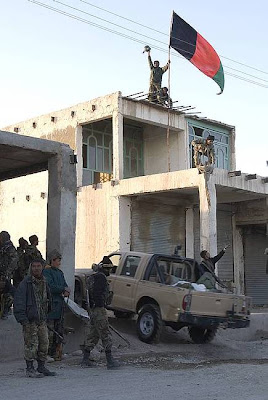 With the Afghan flag flying over Musa Qala (above) and the MoD website coming alive, Tory MP Ann Winterton managed to place an oral question at Prime Minister’s Questions. The exchange was as follows:

Ann Winterton (Congleton) (Con): Will the Prime Minister join me in congratulating our superb military on driving the Taliban out of Musa Qala after a fiercely fought operation? But does he realise that a great opportunity to win hearts and minds was lost because families and friends had to learn of details of that major and critical engagement from the media, with minimal input from the Ministry of Defence? Will he ensure that this regrettable omission does not recur in future, and that the MOD drives the publicity in future?

The Prime Minister: It is for the Ministry of Defence, but particularly for the commanders on the ground, to decide what is right in the particular instance of an operation that is being carried out. I understand that a lot of the information was being provided by the Taliban, who were trying to make a propaganda gain out of what was happening. I am satisfied that our commanders on the ground were doing exactly the right things by our own people, and I am only sorry that families heard about it in a roundabout way rather than directly from the reports of success.

That is as good as it gets – we did not really expect a straight answer in the bear garden on the Commons during PMQs. But a marker has been put down, and there will be a return to the subject.