There has been some confusion … 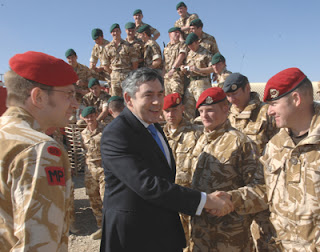 Media reports on Musa Qala state that the town has been retaken, although the MoD website is more cautious. Lieutenant Colonel Richard Eaton, the UK military spokesman in southern Afghanistan, says:

There has been some confusion surrounding Musa Qaleh today … A news release went out in Kabul which I think was confused in some translation between Pashtu and English but it stated we had retaken Musa Qaleh and we were reported as being in the middle of Musa Qaleh. That's not actually the case, we are in the outskirts of Musa Qaleh but the battle to take Musa Qaleh is still going on.

The situation could, however, change rapidly and AP was reporting – as of late afternoon (GMT) that Afghan and international forces had retaken the town, although foreign fighters - possibly members of al-Qaida - were continuing to attack invading troops.

The official position of ISAF is that theirs and Afghan troops had entered the outskirts of the main part of Musa Qala but would now proceed cautiously into the town centre because of improvised explosive devices. With darkness having fallen and in poor weather conditions, it seems that troops are leaving it until morning to secure their gains and consolidate their position.

Meanwhile, Gordon Brown "dropped in" to Camp Bastion to tell troops that operations against the Taliban were "one of the most important of missions" and would "give strength" to Afghanistan's new democracy. Brown also praised British troops for their "huge bravery in very difficult circumstances".

And, despite the apparent difficulty in releasing photographs of troops actually engaged in operations, it seems that no expense (or bandwidth) has been spared to beam photographs of the prime minister to London, for the MoD website (pictured top left). 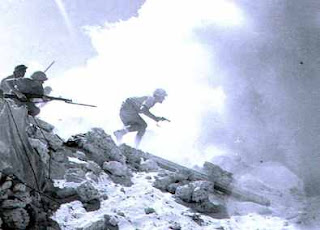 So, why the iconic picture of el Alamain (right)? Well, as the story went, this photograph was entirely staged, prior to the battle. To get the dramatic effect, the Aussies blew up their own cookhouse and then advanced into the smoke, the photographer Len Chetwyn recording the epic action for prosperity.

But, at least, this meant that, when news of the battle broke – way back in 1942, the press were able to print action photographs to illustrate their pieces. More than fifty years later, it seems that the MoD could not take some shots of the preparations, against unidentifiable backgrounds (thereby protecting operational security), which could have been used by the media, ravenous for pictures.

Even now, the MoD is having to use a photograph dating from September, in a desperate attempt to illustrate its own site.

With the only recent photograph showing but a picture of the prime minister, no doubt some wag in Whitehall will, even now, be working on a teeshirt slogan which complains, "We went all the way to Afghanistan and all we got was this lousy picture of Gordon Brown".