In defence questions in the House of Commons yesterday, David Laws, the MP for Yeovil, asked what action was being taken to deal with the shortage of helicopter lift capability.

Surprisingly, the defence minister Adam Ingram responded that, "there is not the problem that the hon. Gentleman describes." He then continued: "We have looked into this. Commanders are not asking for more helicopters."

Clearly, that was not the answer expected as Ingram noted: "The hon. Gentleman looks quizzical…" adding, "but we have to listen to what is required on the ground."

If it is indeed true that commanders "on the ground" are not asking for more helicopter lift capability (in Iraq and Afghanistan) then we have a serious problem … with incompetent commanders. They should be sacked and replaced with better officers, who understand the role of helicopters in modern warfare. 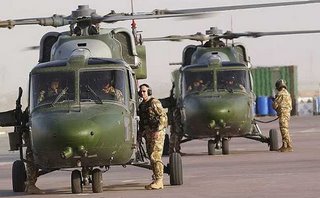 It would have been better, however, if the question had been addressed in terms of overall helicopter capability as it is not just the transport fleet which is inadequate. We are especially deficient in light attack / reconnaissance helicopters, with only six Lynx to cover the whole of the British zone in Iraq.

It is that inadequacy as much as anything which has contributed to the humiliating inability of the Army to deal with the mortar and rocket threat on its headquarters in Basra, which has led to the decision yesterday to withdraw civilian staff from the Basra Palace complex.

And humiliating it is – an enormous blow to British prestige. What possible confidence can the population of southern Iraq have in the ability of the British Army to protect them when it cannot even protect its own headquarters from attack?

To do so, as we pointed out yesterday is not impossible nor even difficult. It just needs the application of resources. In particular, as Viscount Brookeborough observed in the defence debate in June, you need helicopters:

If there are heli hours, eagle patrolling reduces the risk immediately. If helis are at risk, the use of helis in pairs enhances safety yet again. One helicopter operates while the other one watches. Two helis in the air can virtually freeze terrorist movement in a 2 kilometre-square area.

To maintain two helicopters in the air at all times, however, needs about sixteen machines, and twice as many pilots, which is nearly three times more patrol helicopters than we have in the whole of Iraq. Such is the measure of the lack of resource available to our troops. 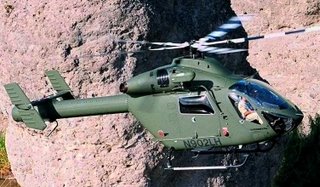 But, instead of doing something about it, such as buying "cheap and cheerful" off-the-shelf helicopters, with a range of good options available, including this MD Explorer (illustrated left), the MoD is going for jam tomorrow, with deliveries of the hideously expensive "Future Lynx", scheduled for some time after 2011. Even then, the load could be reduced by using UAVs but, as with the helicopters, we are opting for "jam tomorrow". 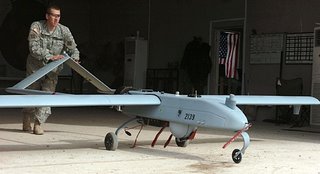 Here, it was particularly significant that the Americans use the Shadow UAV, a system which is turning out to be particularly successful and remarkably cheap. Each unit comprises four advanced air vehicles, two ground control stations, associated components and support equipment, which can maintain continuous coverage for 12 hours, at a price of approximately $10 million. 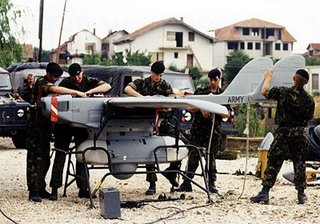 Why the Shadow is so interesting is because it is directly equivalent to the British Phoenix system which, as we recalled recently has so far cost £345 million and, having been introduced in 1998 with a supposedly minimum 15-year in-service life, has never functioned effectively and has been withdrawn from service.

Instead of making up the shortfall now – perhaps buying into Shadow - the government is embarking on a replacemment programme, committing another £317 million to build 99 Israeli-designed Elbit Systems WK-450s, known as the Watchkeeper, the total contract running to £700 million. Yet the system is not due to come into service until 2010 while the need is today, with the British Army currently unable to protect its own headquarters.

We have actually noted before what we have called this "defeatist attitude", calling in aid the incident on 3 October when a British soldier was killed and another seriously injured after three mortar shells landed inside the Shaat al-Arab Hotel base in Basra.

For sure we cannot protect every soldier against every incident but the insurgents ability to harass our forces seemingly at will is making a mockery of our presence in Iraq. That we are not able to deal with it is not an accident or unavoidable. It is serial incompetence - the result of many poor decisions, right up to this very day, which must be remedied. Instead of grandiose plans for new helicopters and UAVs in the future, we need the capability now.

Continued failure should not be tolerated.