So what do we do? 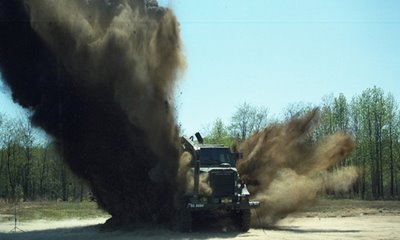 In developing our series of posts under the general heading of "Give war a chance", we need to offer some specifics in terms of how our government should prosecute the war against terror.

As we know, the main effort of this "war" is focused on the two shooting wars in Iraq and Afghanistan which are classified as "counterinsurgencies" rather than conventional wars. The aim, therefore, in theory at least, is to defeat the insurgencies in each country, the word "insurgency" being defined as "an organised rebellion aimed at overthrowing a constituted government through the use of subversion and armed conflict."

But therein – as always – lies a huge problem. How do we define defeat or, turning that around, how do we define victory? In a conventional war, this is easy. We simply take the surrender from the government or representatives of the opposing forces, on the back of a cease fire. But there is no such seminal moment in an insurgency. We know when we have lost it – the government dissolves or collapses. But at what point is it won?

Here, there seems to be some general agreement to a level that might possibly approach a consensus. The answer is simply, we don't know and the best overall expression I can find is here:

In the global war on terrorism, conclusive victory in the classic sense is probably unattainable. This sentiment was rarely expressed outright, but was implicit in the frequent use of such terms as "war of unlimited duration" and "war of uncertain outcome." The sentiment was also present in the view of those who regarded the best attainable result as a gradual rapproachement between the haves and have nots of the world. Here, economic integration and equality, with a consequent dissipation of alienation and mutual hostility, offered the best chance of ultimately nudging the two camps to a peaceful modus vivendi.

Ergo, in the pursuit of a counterinsurgency, we have to commit to as long as it takes. But, if success cannot be clearly defined in positive terms, it can in a negative way, as a very simple injunction: "don't lose".

Arguably, in order to win, we simply must avoid losing. And, in order to avoid that, we can follow the instruction given by the harassed mum to a sibling: "find out what Johnny is doing and tell him to stop it". Find out what we must do to lose, and stop doing it.

Clearly, the one way we can guarantee to lose is to sustain a level of deaths in our armed forces above that which the public will tolerate. That, inevitably, cannot be precisely defined but it can be said that the tolerance for unnecessary deaths will be – or must be assumed to be – very low indeed. Hence, one can set out an unbreakable principle: minimise "unnecessary" deaths.

In Iraq and potentially in Afghanistan, the biggest killer is the roadside bomb and/or the suicide bomb, both targeted against vehicle-borne troops. Therefore, dealing with these should be a very high priority, requiring both passive and active defences.

Passive defences, one might expect, should be easiest to define, in terms of armoured vehicles that are capable of protecting their occupants: there is a group of so-called "mine protected vehicles" which have been shown to be especially suitable which include the Australian-built Bushmaster, the German Dingo II, the Canadian-built RG-31, and now the RG-33, and the US-built Cougar (and Mastiff). That the MoD and the British military are quite evidently reluctant to adopt these vehicles has to be one of the great puzzles of our time but, it should go without saying that their use should be maximised.

The better defence, however, is to avoid ground transport in high risk areas, wherever possible and tactically desirable. As much movement as possible should be by air, using helicopters and fixed-wing aircraft.

As to active defences, coincidentally this weekend, there have been two good articles, one syndicated and the other in the Washington Post, extolling the virtues of going out hunting for IEDs. The first article is actually headed, "Engineers ensure freedom of movement", which demonstrates their value. 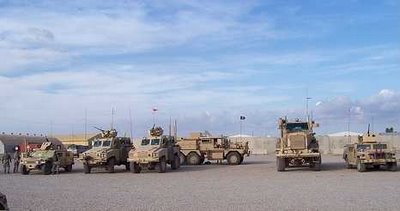 Unlike the British, who are changing their tactics to avoid contact – which includes skulking in barracks or or playing at being David Stirling out in the desert, the US forces are mounting an active campaign to seek out the bombs and thus reclaim the streets and their own mobility. Simply to retreat from the threat is not the answer – it concedes victory to the insurgents. 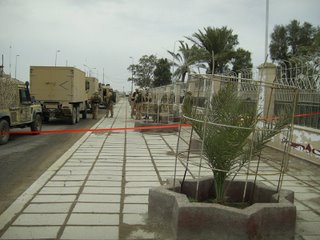 What is evident here is the variety of vehicles being used by the US (see above), with a combination of RG-31s, on "point", the Buffaloes to investigate possible IEDs and the Cougars to follow up with the explosive ordnance disposal (EOD) officers to dispose of the bombs. The British Army has absolutely no equivalents and is reliant on the same combination of Land Rovers and unarmoured trucks that it uses for everything else. This has to be unacceptable and must be addressed.

Defence, though, is only half the battle, and even then there are many other issues which need to be considered. We will deal with those in later posts. But it is also necessary to bring the battle to the enemy, something which the British Army has been very poor at doing, especially in Iraq. This we will deal with in our next post.