The march of the amateurs

We have spent considerable time chuntering that the MSM does not give any space to defence procurement. Now, however, equipping the armed forces is at last on the agenda and we are beginning to see some articles on the issue. But, if the Guardian is any guide, they might as well not bother.

In a piece headed, "British military bites the bullet", with Mark Oliver asking, "Is the British military underfunded, or just spending badly," we find that the years of ignoring the subject, combined with the inherent ignorance and laziness of the MSM, produces something so distorted it is hardly worth reading.

The one thing Oliver does not do is answer his own question - to which the answer is "yes" - yes, it is underfunded and it (or the MoD) is spending badly. But there is a strong European element to the mis-spending, which The Guardian does not even begin to address (although it does mention the Eurofighter and the Type 45 Destroyers), so I thought it would be helpful to put together some examples of Euro-wastage. These are just some of them:

The joint US/UK Tracer/FSCS programme to develop a tracked armoured reconnaissance vehicle. For the British Army, this was to replace the ageing Scimitar CV(R)T. However, the MoD pulled out in 2000 before the first prototype was ready in order to pursue a European project, losing at least £131 million for absolutely no gain.

The Future Command and Liaison Vehicle - the "Panther": Italian-built at a cost of £413,000 each, these supposedly carry out some of the roles of "Tracer" (above) but are useless for patrolling or other functions in either Afghanistan or Iraq. The cost of £166 million for 401 vehicles is, therefore, dead money.

The "Cobra" anti-battery radar - high tech equipment for detecting the source of artillery shells, mortars and rockets. German-built, 10 sets were procured at £17.8 million each. Buying US-built "Firefinder" systems at less than £10 million each would have saved £82 million, giving the Army a perfectly acceptable anti-artillery capability. 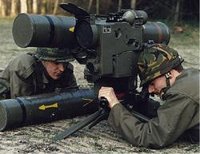 The "Trigat" projects - medium and long-range anti-tank missiles. British participation in these European projects (appropriately, developed by "Euromissile") cost us over £314 million before we had to pull out after the systems failed to deliver, leaving the MoD with a total loss. A rush purchase of US-built Javelin missiles had to be made to equip the Army.

The Multi-Role Armoured Vehicle (MRAV) project, named the "Boxer" - a joint German, Dutch and British venture, managed as a European project. The MoD pulled out after the vehicle proved too big and too heavy for the RAF's fleet of Hercules transports, with a total loss to the defence budget of £48 million.

The MoD has spent (or has committed) £1045 million to developing Unmanned Aerial Vehicles (UAVs), first the Phoenix - losing £345 million - and now the Watchkeeper, to be built by the French-owned Thales company. Yet, despite this extraordinary expenditure, the MoD has no UAV capability in theatre and is having to spend upwards of £60 million on buying/leasing US Predator UAVs. Had we bought proven US systems in the first place, we might have saved more than £400 million.

The MoD has bought 22 of these European Westland-Augusta Merlin HC3 transport helicopters. Working out the purchase price is near impossible but at an estimated £30 million each, US equivalents would have been less than half-price. alternatively, the RAF could have bought Chinooks at £25 million each, saving £110 million in total and considerably more on maintenance, the Merlins currently exceeding expected maintenance costs by over 200 percent. 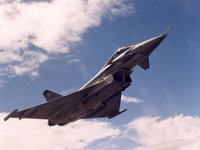 At over £60 million each, these Eurofighter aircraft are an acknowledged Cold War relic. Although rated highly as an inteceptor, current versions have no ground attack capability. US-built F-16s, an adequate fighter with a proven ground attack capability would have cost in the order of £20 million each. With 232 on order, notionally, the MoD could have saved upwards of £10 billion.

Not only the aircraft but also the weapons - the European-designed Storm Shadow air-launched cruise missile costs an amazing £1,000,000 each - for what is effectively a 1,000lb bomb. Having bought 900 of them, the MoD could have saved over £830 million if it had purchased the US equivalent, the JASSM.

The Eurofighter is also to be equipped with European-designed air-to-air missiles. These are known as the Meteor. With the total costs at over £1.4 billion, purchase of US-designed Raytheon missiles (which are being bought anyway as a stop-gap, until the Meteor is ready) would have saved the MoD some £900 million. 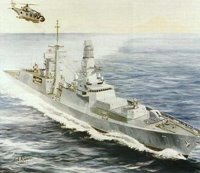 In the rush for European harmonisation, the MoD joined with the French and Italians on the "Horizon" programme for a common frigate. Formalised in 1992, the UK eventually pulled out in April 1999 after failure to agree a common specification and complaints of "unfocused management", with an estimated loss of £537 million, leaving the French and Italians to continue with the project.

Co-operation did not end with the Horizon project. Although the MoD decided to go it alone with the platform, emerging as the Type 45 Destroyer, the ship is equipped with European-designed missile launchers and missiles, which largely account for the huge cost of £1 billion per ship, some £400 million more than the Australians are paying for the more capable US-designed Arleigh Burke class missile destroyers. With five ships now planned, that is a saving of £2 billion.

For the Type 23 anti-submarine frigates, we developed our own type 2087 sonar, at £9 million per set. But the development costs were an additional £300 million, given as a free gift to the French company which bought up the UK manufacturer, leaving it free to sell cut-price versions to the French Navy. Had we bought from the Americans, we could have saved that £300 million. 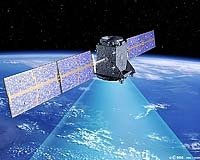 And finally, the EU's Galileo satellite navigation system. By the time it is fully operational, the UK will have paid £400 million towards its development and commissioning costs - the system being then used to underpin the European Rapid Reaction Force. But the US "Navstar" GPS is already available - and free of charge. The £400 million is a total waste of money for a duplicate system.

Putting these all together - but excluding the Eurofighter costs, which are a special case - the excess payments, for no gain whatsoever, come to £8.8 billion. That is considerably more than is spent in any one year on procurement. That would buy a ridiculous 35,000 RG-31 mine protected vehicles or 350 Chinook helicopters.

That is the measure of the wastage on European projects and, the amazing thing is, the MSM can't even begin to work it all out. Read the Guardian piece and see how amateur Mr Oliver really is.