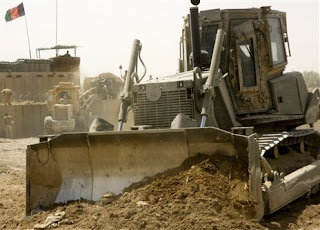 On 14 August 2009, AP photographer Julia Jacobson was with a US Marine patrol in southern Afghanistan when it walked into a Taleban ambush. The clash resulted in the death of 21-year-old L/Cpl Joshua Bernard, hit in the legs by an RPG.

The dying soldier was photographed by Jacobson, the picture subsequently published by AP, despite the objections of the boy's father, a decision which defence secretary Robert Gates objected to "in the strongest terms", calling it "appalling" and a breach of "common decency." This is, of course, the same AP which reveled in publishing pictures of dead babies at Qana.

Justifying its decision, AP has constructed from the reporting of Alfred de Montesquiou, the photos and the written journal kept by Julie Jacobson, and the TV images of cameraman Ken Teh, a report entitled "Death of a Marine," claimed to be a narrative of the clash, "offering vivid insights into how the battle was fought, and into Bernard's character and background."

However, it has to be said that the definitive account, carrying the joint by-line of Montesquiou and Jacobson, does not match the label on the tin, serving more as an ex-post facto attempt to justify the indefensible.

Rather than "offering vivid insights into how the battle was fought", it actually records a tiny microcosm of the overall action, strongly focused on the "human interest" aspect of that one small episode where L/Cpl Joshua Bernard was killed, seeking to put his death in the context of "responsible" war reporting.

Yet, of the 1800-word report, more than a quarter is taken up with biographical detail of Bernard, including an interview with his parents, who are found "Down a rural dirt road in New Portland, western Maine." There, we are told, John and Sharon Bernard sat on their porch and talked about their son. Joshua. He loved literature and showed early interest in the Bible and Christianity. "He had a very strong faith right from the beginning," his mother said.

There can be no complaints about what AP chooses to report – it is their money and their staff who are in the field, taking the risks, and theirs is privilege of deciding what goes into the public domain. They were not breaking any rules in publishing the photograph. But we can take exception at their claim to be "offering vivid insights into how the battle was fought", using that as a justification to publish photographs of the dead and dying.

Strangely though, some "insights" do actually escape into the narrative, not in the main report but in the journal kept by Julia Jacobson. She tells us that the operation started early Wednesday morning in Dahaneh, a Taleban-controlled town a few miles south of Now Zad.

But she then complains that Alfred (Associated Press writer Alfred de Montesquiou), and Ken (AP Television News Cameraman Ken Teh) were put on an assault helicopter which landed outside the compounds they intended to raid. Jacobson, bemoans the fact that she was "stuck on a 7-ton truck with ANA (Afghan National Army) soldiers, an NPR reporter and another American guy, who is a civilian military adviser."

Yet this experience, even if she does not know it or even begin to recognise its importance, gives us one of the better clues as to "how the battle was fought". Now Zad and district, as we know, has become a bitter battleground. Furthermore, there is almost complete stalemate as the Taleban have emplaced IEDs on an "industrial scale", effectively robbing US forces of their tactical mobility and giving rise to a steady attrition, as soldiers are killed and maimed by these weapons.

The effect of the tactic is well recorded in an account of the death of Private Robbie Laws in June as he took part in Operation Panther's Claw. Laws was attached to a squadron of the Light Dragoons which were operating Scimitar light reconnaissance tanks, part of a four-man "dismount" team carried in a Spartan armoured personnel carrier.

His and his comrades' task was to carry out mine/IED sweeps on foot, using hand-held detectors, ahead of the armoured vehicles, whenever their commander suspected a possible trap. With such a slow, primitive and dangerous procedure, the advance was painfully slow, as Laws and his comrades painstakingly cleared the route with their detectors.

We saw similar techniques being used in the battle for Pharmacy Road, where we learned that over 200 troops had to be committed to re-opening a road sown with IEDs. The road is less than a mile long and it takes over 24 hours, with the largest piece a plant available being a commercial JCB.

It was then that we began discussing seriously, the role of armoured bulldozers as an effective counter to IEDs, restoring tactical mobility at minimum risk and with economic use of manpower.

With that background, we then read of Jacobson's complaints, where she tells us that: "We left at 2:30 a.m., a long, long convoy of military vehicles with a bulldozer on tank tracks leading the way and basically creating a new path for us to follow. His job was basically to clear our path of IEDs all the way to Dahaneh. It was a slow drive over maybe five miles, lasting four hours."

And there we learn, for the first time in Afghanistan, that the US – probably learning from Israeli experience – is using bulldozers tactically, as a means of clearing IEDs. Thus Jacobson arrives safely and the five-mile journey only takes four hours.

But such is "girlie" Jacobson's limited knowledge that she describes "a bulldozer on tank tracks", not realising that, by definition, a bulldozer is a tracked vehicle. And she does not even begin to understand the tactical significance of what she sees.

Therein lies a crucially important demonstration of the inadequacy of the media. We have written endlessly about the strategic importance of IEDs in Afghanistan, and the effect on the all-important tactical mobility, to say nothing of the steady flow of casualties arising from these weapons, which are eroding public support for the campaign.

If these weapons are going to be defeated, it is going to be through the application – in part – of technology, and equipment, not all of it high-tech, as we see with the pioneering use of bulldozers.

Further, it is public (and political) understanding, conveyed by the media, that is going to push the military into using the right equipment, by highlighting successes and bringing to public attention the deficiencies and limitations of the kit that is actually used.

But the media is not up to the job. The average journalist is profoundly ignorant about military equipment and very few bother to find out. An "expert" in the media is one who manages to tell the difference between a tank and a tracked APC.

More to the point, the media is not interested. The feminised, "human interest" agenda has taken over, where the only copy fit to print is emotive, gushing, human suffering stories, which emphasise the pain of war and (with only a few honourable exceptions) tell you nothing about how the war should and could be won, thus abolishing the very pain about which the media professes to be so concerned.