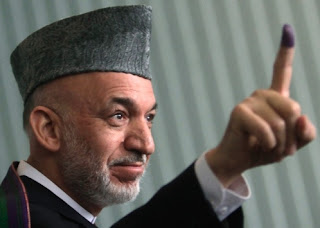 As another two British soldiers die in Afghanistan, killed by an RPG - bringing the grand total to 210 – the coalition powers are now paying the price for grossly over-selling the Afghan presidential election.

Thus does The Times report today that "West faces losing battle over Afghan poll fraud", retailing an admission from "Western and Afghan officials" that that widespread and systematic fraud during the elections has tarnished the legitimacy of any future government and undermined the Nato campaign.

Cited also is David Kilcullen, "one of the architects of Nato's anti-insurgency campaign". He says that the failure of the Afghan Government to provide basic services in many areas was allowing the Taleban to establish its own courts, hospitals and security. "A government that is losing to a counter-insurgency isn’t being outfought, it is being outgoverned," he adds.

As to the election, one international election observer pulls no punches. He states: "The pattern is of systematic and widespread fraud, which really does call into question the legitimacy of the election. This is large scale and it is across the country." Ahmad Nader Nadery, head of the Afghan Free and Fair Election Foundation, agrees. He concedes that said the scale of the vote rigging was "serious".

Perhaps even more serious is a report from James Hider - one of the more reliable journalists – which tells us of "hundreds of angry tribal elders and local officials from southern Afghanistan" who gathered in Kabul today to protest against what they dubbed "massive electoral fraud that robbed entire districts of their votes and allocated them to the incumbent president, Hamid Karzai."

Writes Hider: "In a string of searing testimonies, community leaders told of how villages that had been too terrified to vote because of Taleban threats, of mysteriously produced full ballot boxes, and with most of the votes cast for Mr Karzai, often by his own men or tribal leaders loyal to him."

Abdulkayam Balets, "a grey-bearded and turbaned elder who had been in charge of a polling station in Shurawaq", in Kandahar province, speaks for the many. He said no ballot boxes reached his facility. They were instead sent to the district office, where they were stuffed with votes for Mr Karzai by members of his party. "We want Karzai to resign and an interim government installed, then we can have a free election that he can't manipulate by force," he says.

Sentiment that is driving increasingly voluble protest in Kabul is rippling around the world, with Michael Boyle in The Guardian accusing the US and UK of "flying blind" in Afghanistan, pouring blood and treasure into a war that looks increasingly senseless as the days go by.

He calls for a re-examination not only of our strategy but of the unconditional support we have afforded the Afghan government. The Afghan government has been the recipient of billions of dollars in aid, yet almost every ministry lacks basic capacity. It has 134,000 police and 82,000 soldiers, few of whom can operate independently of foreign forces.

Worse still, writes Boyle, the Afghan government has scored domestic political points by blasting the US and UK and ignoring their demands. We can no longer pretend we are partnering with a government when it does not govern or see itself as a partner. It is time, he concludes, to admit that unfettered support from the west may be undermining the efforts to fix the strategy in Afghanistan.

More worrying for the Obama administration is the op-ed in today's Washington Post, which declares unequivocally: "Time to Get Out of Afghanistan".

Written by George F. Will, it notes the death of two Marines, and observes that the war already is nearly 50 percent longer than the combined US involvements in two world wars, where "NATO assistance is reluctant and often risible".

Will questions the strategy of "clear, hold and build," pointing out that which has been obvious since day one, that the Taleban forces can evaporate and then return, confident that US forces will forever be too few to hold gains. Hence, he writes, nation-building would be impossible even if we knew how, and even if Afghanistan were not the second-worst place to try: The Brookings Institution ranks Somalia as the only nation with a weaker state.

US forces, Will goes on to note, are being increased by 21,000 to 68,000, bringing the coalition total to 110,000. About 9,000 are from Britain, where support for the war is waning. Counterinsurgency theory concerning the time and the ratio of forces required to protect the population indicates that, nationwide, Afghanistan would need hundreds of thousands of coalition troops, perhaps for a decade or more. That is inconceivable.

Instead, Will concludes, forces should be substantially reduced to serve a comprehensively revised policy: America should do only what can be done from offshore, using intelligence, drones, cruise missiles, airstrikes and small, potent Special Forces units, concentrating on the porous 1,500-mile border with Pakistan, a nation that actually matters (a strategy known as "offshore balancing").

To conclude, Will cites de Gaulle recalling Bismarck's decision to halt German forces short of Paris in 1870. Genius, he said, sometimes consists of knowing when to stop. Genius, says Will, is not required to recognise that in Afghanistan, when means now.