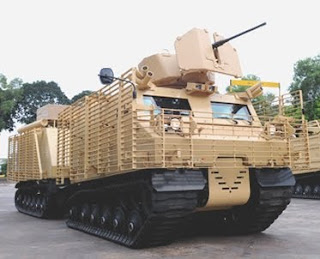 "Warthog tank unveiled in bid to cut Afghanistan deaths", proclaimed The Independent, only quickly to change the headline to: "Meet the Warthog: the latest weapon in war".

The change, presumably, was to spare the blushes of correspondent Kim Sengupta, who may have wished to distance himself from the charge that he is yet another of those journalists who does not know the difference between a tank and an armoured personnel carrier.

To be fair to Sengupta, he does not actually use the term "tank" in his piece, which introduces us to a "military vehicle" which is shortly to join the British Army inventory, destined to "play a crucial part in the desperate attempts to combat the roadside bombs ... ". It is "aimed at giving better protection for troops and turning the tide of an increasingly ferocious insurgency."

The 19-ton vehicle replaces the Vectors and the Vikings, two of the Army's failed attempts at bringing mobility to the "battlefield", the latter having been the vehicle in which Lt-Col Rupert Thorneloe was killed. This vehicle, of which the Warthog (pictured) is a heavier version, was designed as an amphibious assault vehicle for the Royal Marines, its overall weight limited by the need for it to be able to float and to be carried by a Chinook helicopter.

Some 50 Vikings were fielded to Helmand and it is understood that 27 have been written off by mine or IED explosions, killing at least nine soldiers and injuring many more. A total of 115 Warthogs will be produced for the MoD by Singapore-based Technologies Kinetics, at a cost of £150m, and the type is expected to be deployed in Helmand by next summer.

Sengupta tells us that defence officials "insist" that thorough evaluation of how the losses occurred has helped design the Warthog. It will thus be "one of the safest vehicles sent to the conflict" – or so we are told. It is better armoured than the Viking, and has been equipped with state-of-the-art counter measures against IEDs and mines.

Despite the claims, it lacks the classic v-shaped hull which is necessary to deflect blast from buried devices, and the cab is too far forward to distance the crew from pressure-initiated devices which detonate when the vehicle drives over them. Lacking these crucial safeguards, the Army therefore is relying on brute mass of armour, which will have limited effect.

As such, the vehicle represents a continuation of the Army philosophy of specifying high-mobility vehicles and then bolting-on protection to a design optimised for off-road performance rather than protection. This is in marked contrast to the US philosophy, which majors on protection and then seeks to enhance mobility.

The Warthogs have the capacity to take still more armour, which they will probably need when the Taleban start using even bigger IEDS to take them out – a tactic which will probably be successful, despite it having failed with the better-designed Mastiffs.

Each weight increment, however, reduces mobility. Eventually, we could see convergence as the decreased mobility of the over-weight "high mobility" vehicles matches the enhanced mobility of modified protected vehicles. That was certainly the case with the Vectors – in fact, more so as the weight of the extra armour on this vehicle caused bearing failures and wheel losses, providing stasis rather than mobility.

Perhaps the bigger problem though is the intellectual stasis. The high-mobility doctrine is the Army's answer to an insecure road network, frequently seeded with IEDs and mines. The ability to travel off-road enables soldiers to by-pass the roads and take to open country, where the unpredictability of the routing minimises the risks. 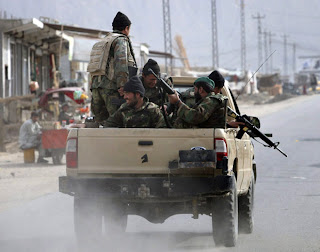 However, the broader Army strategy is progressively to move from independent combat operations to training and mentoring the Afghan National Army, which means that joint operations will become the norm. The ANA, though, are equipped largely with unarmoured Ford Rangers pick-ups (pictured) and International trucks, with limited off road performance.

British Army detachments will be faced either with sharing the risks, negating the advantages of their more capable vehicles, or driving off-road while their ANA charges are tied to the road network. If Afghan soldiers take higher casualties as a result, morale is likely to suffer.

Arguably, therefore, the British policy of securing protection and tactical mobility by equipping with high-performance off-road vehicles is self-defeating. It shifts emphasis away from developing and then securing the road network, leaving the Afghans – military and civilians – disadvantaged and at higher risk than the troops who, according to the McChrystal doctrine, are there to protect them.

One alternative is to pump more resources into route engineering, to minimise opportunities for IED emplacers, to increase surveillance and interdiction, and to improve technical measures for detection and safe detonation of devices, with a higher proportion of route clearance vehicles. Such a focus would have the advantage of making routes safer for all users, not just the military.

The Army, though, is just catching up with the idea of better protected vehicles, years late, responding to rather than anticipating Taleban tactics. It is perhaps too much to ask that it should be capable of widening its thought processes to encompass more than one idea at a time. Off-road mobility, therefore, is the policy we are stuck with – warts and all.