We can defeat ourselves 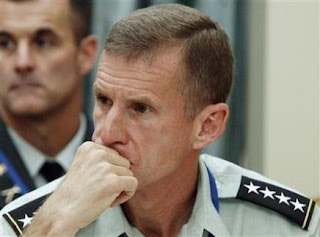 That is the blunt assessment from General Stanley McChrystal, the senior US commander in Afghanistan, in his aptly-named "assessment report" leaked by The Washington Post.

"The situation in Afghanistan is serious," he writes. "Neither success nor failure can be taken for granted." And, "although considerable effort and sacrifice have resulted in some progress," he adds, "many indicators show that the situation is deteriorating."

McChrystal sees three major problems, and he does not distinguish in importance between them. There is "a resilient and growing insurgency", but there is also "a crisis of confidence among Afghans" – in both their government and the international community. That undermines our credibility and emboldens the insurgents. Thirdly, there is "a perception that our resolve is uncertain makes Afghans reluctant to align with us against the insurgents."

Despite that, McChrystal believes that success is achievable. And in a single sentence, he injects a degree of realism that may yet make it happen, cutting through the cant and false optimism that we have been hearing for so long. That success "will not be attained simply by trying harder or 'doubling down' on the previous strategy."

The general concedes that additional forces are necessary but, he writes, "focussing on force or resource requirements misses the point entirely." The "key take away from this assessment", he declares, "is the urgent need for a significant change in our strategy and the way we think and operate."

There is no mistaking this phrasing. No matter how much the media – and anyone else - might spin it, McChrystal puts strategy as his first priority, his "key take away". To focus on force or resource requirements "misses the point entirely". You cannot get clearer than that but, just in case there is any doubt, he later adds: "... it must be made clear: new resources are not the crux."

NATO's International Security Assistance Force (ISAF), McChrystal avers, requires a new strategy which is credible to, and sustainable by, the Afghans.

When it comes to resources, he frames this carefully, stating that the strategy must be "properly resourced" but he links this with the requirement that it must be executed "through an integrated civilian-military counterinsurgency campaign that earns the support of the Afghan people and provides then with a secure environment."

There is no room for debate here either. McChrystal is making it clear that this is a "civilian-military" effort. He is not talking about the military winning the fight on its own.

Nevertheless, McChrystal concedes that the campaign in Afghanistan has been historically under-resourced, and "remains so today". ISAF, we writes, "is operating in a culture of poverty". Consequently, it requires more forces, well in excess of those which can be achieved by efficiency gains.

But, he admits, those greater resources will not be sufficient to achieve success. They will merely enable the implementation of the new strategy. Conversely, though, "inadequate resources will likely result in failure". Then, again emphasising the primacy of strategy, he declares "without a new strategy, the mission should not be resourced".

There is no messing here. Strategy comes first, then it must be resourced. Without the right strategy, there should be no resources, but without the resources, the "likely" result is failure. And the result of that, inevitably, must be withdrawal. McChrystal is effectively saying, change the strategy or pull out.

As expected, he lays great emphasis on growing and improve the effectiveness of the Afghan National Security Forces (ASNF), but he adds that the coalition must "elevate the importance of governance."

But then, in a clear change of direction, he notes that, in a country as large and as complex as Afghanistan, ISAF "cannot be strong everywhere". Therefore, we must, he writes, "prioritise resources in those areas where the population is threatened, gain the initiative from the insurgency and signal unwavering commitment to see it through to success."

Interestingly, McChrystal also devotes considerable space to looking at the nature of the "fight". We will look at these observations in detail in a separate post but, in summary, he tells us that we must redefine the nature of the fight, clearly understand the impacts and importance of time, and change our operational culture.

This is a different kind of fight, he states. It is not an annual cyclical campaign of kinetics driven by an insurgent "fighting season". Rather, it is a year-round struggle, often conducted with little apparent violence, to win the support of the people. Protecting the population from insurgent coercion and intimidation demands a persistent presence and focus that cannot be interrupted without risking serious setback.

As if that was not problematical enough, we are told that the coalition must conduct classic counterinsurgency operations in an environment that is uniquely complex. Three regional insurgencies have intersected with a dynamic blend of local power struggles in a country damaged by 30 years of conflict. This makes for a situation which defies simple solutions or quick fixes. Success demands a comprehensive counterinsurgency (COIN) campaign.

As to the strategy, it cannot be focused on seizing terrain or destroying insurgent forces; our objective must be the population. In the struggle to gain support of the people, every action we take must support this effort. The population also represents a powerful actor that can and must be leveraged in this complex system. Gaining their support will require a better understanding of peoples choices' and needs.

Within that, there is both a short and long-term fight. The long-term fight will be decisive. Failure to gain the initiative and reverse insurgent momentum in the near term (next 12 months) – while Afghan security capacity matures – risks an outcome where defeating the insurgency is no longer possible.

And then we get some serious candour, Formidable as the threat may be, McChrystal says we make the problem harder. ISAF is a conventional force that is poorly configured for COIN, inexperienced in local languages and culture, and struggling with challenges inherent to coalition warfare. These intrinsic disadvantages are exacerbated by our current operational culture and how we operate.

Pre-occupied with protection of our own forces, we have operated in a matter that distances ourselves – physically and psychologically – from the people we seek to protect. In addition, we run the risk of strategic defeat by pursuing tactical wins that cause civilian casualties or unnecessary collateral damage.

The insurgents, he concludes, cannot defeat us militarily but we can defeat ourselves. How McChrystal thinks we can avoid that, we will look at in more detail in successive posts.