You really could not make it up! 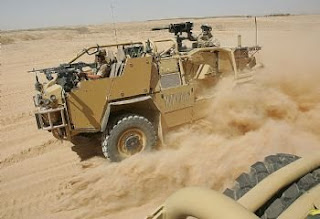 Despite being sent early drafts (at their request), at the eleventh hour - and as the book is about to go into production, fully typeset and indexed - we get a formal "request" from the MoD to remove several passages on the grounds that they breach "OPSEC" (Operational Security).

One passage to which the MoD took great exception recounted how a soldier discovered an IED (aka roadside bomb) in al Amarah, detailing what he saw that made him suspicious. We have been asked to remove this because, "As it stands it may lead to IEDs being placed in less obvious locations hindering detection."

And the source of my information - referenced in the book? Ah! The MoD website. (I wonder how long that link will remain active - its only been up since 2005.)

Nor must I tell people that the Jackal (pictured) has armour "around the cab and the sides". This "may lead to increased targeting in that area." But, as someone said to me, these Taleban are really cunning - they've got this new equipment ... called "eyes".

Is it any wonder the MoD are losing the war?