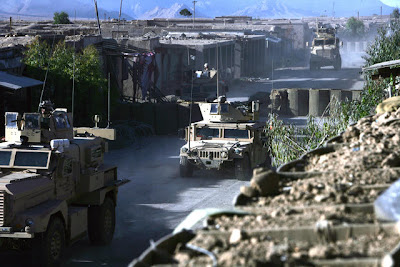 It was difficult not to be impressed by the "Mission Impossible?" Dispatches documentary on Channel 4 last night, not least for the galaxy of military "stars" that journalist Stephen Grey managed to interview – including Jock Stirrup, CDS, and Richard Dannatt, CGS.

However, as I suggested in my post on Sunday, such high-level access comes at a price, and the MoD would have driven a hard bargain to allow such prestigious interviews to have gone ahead.

This would not amount to anything as crude as an attempt to shape the editorial content of the programme, but the deal was undoubtedly in terms of what was left out, or left unsaid. That left Grey, rather cleverly I thought, to say on the Channel 4 website, "I will leave viewers to judge for themselves what these men have to say."

If we were intended to read between the lines, that was not difficult as they were far apart enough to drive a Challenger II between them. And, if there was a message to be read from that exercise, it was not a happy one. Certainly, what I took from it was an impression of uncertain objectives, lack of strategic direction, a confused chain of command, disastrous tactics, lack of resources and inadequate equipment.

Nor can we be assured that this is in the past, although it what there that the heavy hand of the MoD was probably at its most oppressive. We were allowed a backwards glimpse at the chaos, but there was very little analysis of where we stand at present, or what the future prospects might be.

Such was the detail, however, that we are going to have to come back to this for a more thorough analysis. But what was most striking of the early part of the programme was the rehashing of the story of the disastrous "platoon house" policy of 2006, the film centring on the events at Musa Qala, culminating in its retaking the year before last, largely by US forces.

We were also reminded that there were four such platoon houses, the other three at Sangin, Geresht, and Now Zad. We mentioned the latter briefly in February 2007, referring to the epic struggle of the Gurkhas at that site.

However, while we got the history of Musa Qala, nothing was said of Now Zad. But, yesterday evening we received the daily picture update from the DoD which, by complete coincidence, offered the photograph shown above, with the following narrative:

US Marines with 3rd Battalion, 8th Marine Regiment conduct an operation in Now Zad, Afghanistan, April 3, 2009. Residents have abandoned Now Zad, a village in the Helmand province of Afghanistan, because of the strong insurgent presence. The Marines, assigned to a ground combat element of Special Purpose Marine Air Ground Task Force – Afghanistan, are conducting operations to help the Afghans regain control of the area. (DoD photo by Gunnery Sgt. James A. Burks, U.S. Marine Corps/Released)

This actually reinforces the depth of British failure in Afghanistan for, not only has this village – once occupied by British troops – been abandoned, its recovery is being left to US forces with, it appears, no British involvement. This comes on the back of the recovery of Garmsir last year, almost entirely by US Marines.

But what is absolutely staggering is that, on the day that photograph was taken, the MoD ran a "puff" on its website, telling us that "British soldiers have been helping teach their Afghan Army counterparts English while at the same time developing their own Pashtu and Dari language skills to help improve understanding and the quality of training."

That was the sole extent of official British news from Afghanistan, yet from the official US site we get this:

Coalition ground forces called in several Navy F/A-18C Hornets and F/A-18E Super Hornets to hit enemy targets in the vicinity of Kajaki Dam, including an enemy mortar position, observation posts, communication tunnels, and a spotter position in a walled compound. A variety of GBU-series precision weaponry was used to carry out the strike, which took place in response to anti-Afghan mortar fire.

An F/A-18C and a coalition aircraft used a GBU-12 and GBU-38, as well as a strafing pass to strike anti-Afghan forces spotted gathering in a staging area near Musa Qala. Enemy forces were engaged in readying rockets for launch against coalition units. The coalition aircraft struck a large group of enemy combatants, while the Hornet hit a series of pillboxes and bunkers in the area. The Hornet also attacked enemy targets in Now Zad following reports of enemy fire there.

The reference to Kajaki is also interesting, as last Saturday, a US soldier was killed there, while what were described as "joint forces" (i.e., US and Afghani) killed 15 militants during a raid on a compound reportedly used for making weapons and bombs.

Kajaki was also, until very recently, an area supposedly under British control yet, on 2 April we also saw an official report telling us that a Navy F/A-18E Super Hornet and an Air Force MQ-9A Reaper dropped guided bomb unit-12 and 38s on anti-Afghan compounds near Kajaki Dam.

Several enemy gunmen who had been firing rocket propelled grenades and assault rifles at a Coalition patrol from the structures, were killed in the strikes. The aircraft also provided overwatch to the convoy and provided tactical surveillance. Then …

During a second engagement taking place in the area around Kajaki Dam, Air Force F-15E Strike Eagles and A-10 Thunderbolt IIs dropped GBU-38s and performed strafes, targeting enemy personnel with RPGs and automatic weapons. The A-10 destroyed an enemy lookout tower with one of its bombs as an F-15E hit a gunman hiding behind the berm of a small irrigation water pool. Coalition ground forces followed up the airstrikes with a ground attack.

Additionally, near Lashkar Gah, still occupied by British forces, a US Air Force F-15E executed a show of force expending flares in order to help a coalition unit break away from enemy gunfire. When the enemy's shooting continued after the fly-over, the F-15E strafed the hostile forces with its guns. An F/A-18E also flew a show of force, suppressing enemy fire from another enemy position.

And, of the fabled Musa Qala, a Strike Eagle employed a GBU-38 to destroy an anti-Afghan forces bunker built inside a residential compound. Enemy personnel inside were shooting at coalition troops when the position was blown up.

There is a whole war going on out there, and not only are we being told nothing of it by our own government and media, it is one which is largely being fought by US forces in a region that was originally allocated to the British.

Instead of news, we were treated last night to a picture of squabbling, dysfunctional and clearly inept senior British officers. What Stephen Grey did for us, therefore, was explain why it is that US forces have largely taken over. This is Iraq all over again – another famous British "victory" in the making.