Cut and be damned 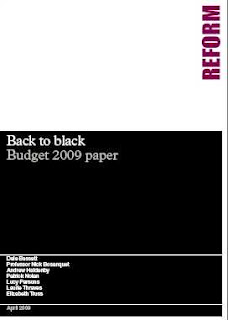 Public spending should be cut by £30 billion says the think tank, Reform, as retailed by The Daily Telegraph. Both main political parties, it goes on to say, should stop the "conspiracy of silence" which is ensuring state spending remains high.

The detail is in its report and, with good cause, one of its targets for cuts is defence procurement. "Inappropriate" defence projects, says the think tank, should be ended, these including the future carriers, Eurofighter Tranche 3, A400M and Nimrod MRA4. They, we are gravely informed, "do not contribute to the UK's modern defence requirements."

Notionally, this would save £2.7 billion in 2010-2011 and the savings thus gained would act as an effective platform for further reform of defence procurement. Says Reform, if necessary, some of these programmes could be replaced with relevant off-the-shelf purchases at a lower cost. This would come at a cost to the Exchequer which would reduce the savings identified

However, while one cannot begin to disagree with the general thrust of the Reform thesis, their offering does little more than illustrate the huge difficulty in making sensible decisions on the purchase of military equipment.

Taking the list from the top, it is strongly arguable whether the carriers could be regarded as not contributing to the UK's "modern defence requirements," but it is not an issue I would care to argue and be confident of winning either way. Of course, the savings would be substantial, but the greater saving would be in not buying the Joint Strike Fighter to equip the carriers. Yet, Reform has nothing to say on this.

But, if the saving, to say the very least, is controversial, the Eurofighter Tranche 3 is equally so. This saga is one of long-standing and such is the nature of the contractual arrangements that, to cut the order now would possibly cost as much in compensation as would buying the aircraft. There is, though, something of an end in sight.

The idea is that we should split the tranche of 88 and commit to just 40 aircraft immediately, then allowing the 24 sold to the Saudis to be included in that number. That would leave 16 aircraft to be paid for but, with each airframe at £88 million, that still leaves us £1.4 billion to find. Like it or not, this is probably the best deal we can hope for. Reform's idea of savings here are probably illusory.

Turning to the A400M, there are no savings there to be made at all. With or without – and preferably without – this aircraft, we still need the airlift capacity. Thus, if the aircraft is cancelled, the same amount of money will have to be spent on C-17s or C-130Js, or a combination of the two.

The Nimrod MR4, however, is another matter. It is probably fair to say that if the clock was wound back, this aircraft would not have been ordered. But, with such a huge investment already made, should it now be cancelled the loss would be enormous. And there would remain a need for a high performance maritime surveillance platform, which could hardly be cheap, and could hardly be off-the-shelf.

Looking at the Reform proposals in the round, therefore, it is very hard to see how their ideas could yield their projected – or any – savings. The bigger point, though, is that waving a magic wand, making arbitrary cuts, is not the way to contain defence costs.

Equipment requirements, as we have so often observed, should stem from strategic requirements and then the doctrines that emerge from them. We then look for best value amongst the equipment needed to fulfil the needs. It is not an exercise for bean counters and for Reform to enter the fray is unwise.