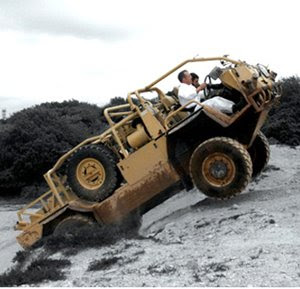 First it was a truck, then they added guns and it became a Supacat M-WMIK. Then they bolted on some armour, so it became a truck, with guns with bolt-on armour. And lo! It became the Jackal.

Now, after the loss of at least eighteen of these trucks-with-guns-with-armour, and four dead, we have the life and the resurrection, with the emergence of the enhanced Jackal or the Jackal 2.

Although not specified officially (and there have been no photographs released), the vehicle has been further armoured, adding more to its weight, so that we now have a truck-with-guns-with-armour with more bolt-on armour. That is the way the British Army works.

Some 110 Jackal 2s have now been ordered, with more than 70 Coyote Tactical Support Vehicles, a six-wheel version of the same thing, set up to carry cargo in support of the Jackal detachments.

For these miracles of military engineering, the MoD is to pay £74 million of our money, split between Supacat, which will provide the design and programme management, and Babcock Marine which will make the things. That averages out at just over £400,000 per machine.

Needless to say, the beneficiaries of this largesse are gushing about their good fortune. Nick Ames, the managing director of Supacat, is saying: "This alliance will help to ensure that our armed forces receive the best possible equipment within the shortest possible timescale. More importantly, it will both enhance their operational effectiveness and their protection."

Quentin Davies, the minister of state for defence equipment and support, who could have announced the order to parliament during Monday's defence debate, obviously did not think this venerable institution was important enough. He thus announced it at the British Army's Long Valley testing ground.

"These impressive vehicles will give our troops increased protection on frontline operations," he purrs. "We are showing our commitment to provide our service personnel with the very best equipment we possibly can."

Thus does the BBC report, "this deal protects jobs and troops." Meanwhile, Gary Wakefield, recently injured in Afghanistan from a mine or IED, tells his local newspaper, "The amount of injuries coming back is unbelievable." There is, of course, no connection.