A pig with lipstick 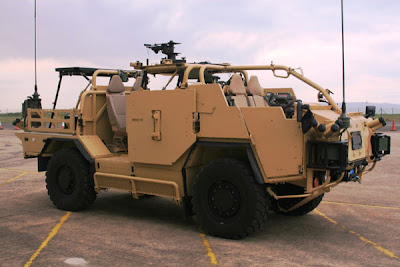 More details of the Jackal 2 are emerging, not least with a report from the BBC which outlines some of the changes and an entry on the MoD website. And we have now obtained a photograph of the prototype (above – with the MoD offering below).

From the various sources, we learn that the engine, transmission and suspension are basically the same, but the chassis has been upgraded to allow the vehicle to carry a greater load and give it greater strength.

This, as we surmised, has permitted the installation of additional armour. The main changes here are the fitting of a number of blast plates on the floor of the vehicle, underneath the gunner's position. The two seats also have steel protection surrounding the underside and back.

The new vehicle can now also carry four soldiers, one more than the Jackal 1 and the armoured door locks back into the open position, allowing troops travel while looking out of the door.

The rear of the vehicle has also been redesigned, allowing fuel or water cans to be carried on the outside of the vehicle, enabling troops to store their Bergens (backpacks), extra ammunition, or other equipment.

With the additional armour, crew survivability will undoubtedly be enhanced and, without question, the vehicle offers better capability and protection than the Land Rover Wimik, which it replaces - not the Snatch Land Rover, as so many journalists insist on stating.

However, while this vehicle in many ways symbolises the lack of coherence in British military vehicle design and procurement, the problems go far deeper than that, reflecting the underlying confusion in strategic aims and tactical doctrines (or the lack of them).

Starting at the top, the very existence of this vehicle is a testament to that confusion. At one, we have a vehicle that is a special forces raider, a weapons platform and a scout/reconnaissance vehicle. It is also used as a convoy escort and performs the assault role that would in past conflicts have been fulfilled by light tank or armoured car.

Therein lies the heart of the problem. What started as a high mobility truck was adapted for the very specific requirements of the special forces and, in the absence of any suitable replacement for the Land Rover Wimik – which in itself was a stopgap, much misused for a variety of roles – was then pressed into service, thus perpetuating the original confusion. 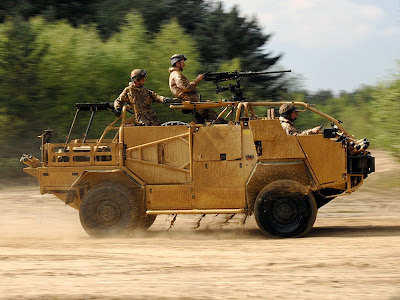 Basically, if the Army needs an armoured car (which indeed it does, being virtually the only modern army without such equipment) then it should procure a suitable design. If it also needs a scout car – which is altogether a different animal – then it should also obtain one, and if it wants convoy escorts then something very different is also required. The fatuous attempt to provide what amounts to a multi-role vehicle, that ends up being all things to all men, is fundamentally flawed.

Turning specifically to the fabled off-road performance of this "beast", this - when the Jackal was first introduced - was cited as its main advantage. Thus we were told:

Although incorporating a fully-integrated protection system and reinforced armour plating, Jackal's main defences are its mobility and agility. This makes Jackal perfectly suited to the operational terrain of southern Afghanistan, where speed and manoeuvrability are essential.

As it turns out, the "mobility and agility" have proved dangerously insufficient so the Army now finds itself in the classic position of having to ask for more armour to be bolted on to overcome the inherent defects of the vehicle and the underlying concept. 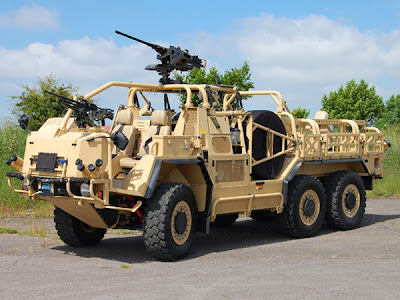 This puts it in an unenviable position. Having relied on a flawed concept for protection, it has ended up with a vehicle which is optimised for off-road performance, to which it now has to add protection. This contrasts totally with the US concept which has been to procure a vehicle optimised for crew protection and then to improve its off-road mobility.

Thus, we have the US awarding a contract to Force Protection, to upgrade the 1,500-strong Cougar fleet with the retro-fitting of independent suspension at a cost of $122 million.

What we could well see as a result is a convergence between the two design concepts. As the Jackal acquires greater weight in an attempt to improve protection, its off-road performance will be degraded (as indeed has been the case) while the Cougar fleet with its enhanced suspension is able to match that degraded performance, while offering far better protection.

Therein lies the fatal (quite literally) flaw in the British approach. As we are reminded on our forum and elsewhere, mine and blast protection, to be effective, must be designed in, ab initio. It cannot be bolted on.

What makes this worse, however, is the complete inability of the MoD and the Army to admit their own mistakes. Having started down the wrong path, they follows in the classic mould of poor generalship of reinforcing failure, bolting on more armour to a poor design, in the vain hope that this will somehow overcome the inherent defects.

Then, as always, they devotes huge amounts of time and effort to their propaganda machine in an attempt to convince themselves and others that they have made the right choice. With the one exception of Ann Winterton, they will succeed with the MPs and the BBC report already shows that we need expect no criticisms from the media.

But the final outcome is that they are compounding the original errors in also purchasing the Coyote (pictured above). If actually fielded in the configuration shown, this will transcend the normal incompetence we have come to expect from the MoD and the Army. Without even the bolt-on protection of the Jackal, sending troops out in this will be nothing short of murder.