A diet of mantras 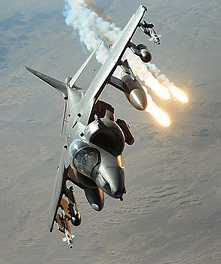 Right on cue, we get another complaint about "overstretch" in the media, this one "inspired" by shadow defence secretary Liam Fox, on the basis of a parliamentary question answered on 30 April.

Fox asked for the average and highest number of days of detached duty for each RAF trade in the last 12 months and was given a comprehensive table which sets out the figures. This included details for pilots, who spend an average of 76 days on detached duty, with an unspecified number (which could be one) spending 315 days away. Medical staff (unspecified) average 161 days with a number spending 304 days away, while air traffic controllers are doing 106 days, some peaking at 360.

This is somehow translated into the legend that, "Overworked RAF faces manpower crisis". Then we learn that, "It is thought that the strain of continuous operations in Iraq and Afghanistan for six years has meant that hundreds of RAF personnel have resigned fed up with time away from their families." Personnel, we are told, are supposed be away for no more than 140 days but figures obtained from the Ministry of Defence indicate that the "overstretch crisis" is so severe that the rules are being breached.

This is about the so-called harmony guidelines. For the RAF, the original aim was indeed for individuals to be away no more than 140 days in a 12-month period before breaching harmony. But breaches are by no means a new phenomenon. According to figures in 2007, some 6.7 percent of trained strength was deployed for periods in excess of that.

However, the guidelines have been revised and are now couched in terms of spending no more than 280 days in every 24 months away from the normal place of duty.

By this measure, we have a complex situation, where the problem is related to "pinch points" – shortages in specific specialities. Dentists, it seems, are not in breach, Chaplains are somewhat in demand with 10.8 percent in breach and personnel trainers (formerly admin training) suffer 14.3 percent. Second worst off are gunners, who are 18.4 percent in breach, against medical staff at 18.6.

Whether that amounts to a "crisis" is another matter. The situation has been with us a long time but, at the very least, has stabilised. Compared with 2007, the RAF establishment is roughly the same, at 96.3 percent of requirements. And last year trained outflow fell 15.2 percent, running at 3,820 compared with 4,500 in 2007.

As of December last, the shortfall on an establishment of 41,290 was 1,540 but, with the first quarter figures out soon, an improvement is expected as the recession bites. Thus, the RAF is forecast to reflect the broader trend which became apparent at the end of last year, when – according to the latest figures - 21,670 personnel joined the forces, compared with losses of 18,570 – a net gain of over 3,000.

To say that this is a classic "non-story", therefore, is to put it mildly. It is thus hard to accept Liam Fox's assertion that the figures prove that an "overstretch crisis" extends across the Armed Forces, or that "Labour's cuts to the RAF are now biting hard." Still less does this support his argument that, "This is why we need a Strategic Defence Review so that we can work out the future role of each service and ensure that their commitments are properly resourced."

Far from "cuts", when it comes to RAF spending, we see from this debate that the Labour government has been throwing money at the Harrier fleet, having spent something like £860 million on upgrades to improve its performance specifically for roles in Afghanistan.

To put this in perspective, this is £160 million more than is being spent on the entire armoured vehicle package for the Army, announced last October, and represents the purchase price of approximately 150 Super Tucanos.

As we pointed out two years ago, the costs of running the Harrier fleet are staggering, with official figures put at £37,000 per hour – exclusive of ordnance costs. For a capability which is, at best, highly suspect, this is little short of insanity, a wilful misallocation of resources that cries out for intelligent analysis.

It does not need a Strategic Defence Review to work out what is going wrong with current defence policy, and nor does repeating the mantras of "overstretch" or "Labour's cuts" take us any further. If Fox really wanted to relieve pressure on the budget, he would be pressing for the retirement of fast jets in Afghanistan, and their replacement with several squadrons of Super Tucanos, one of which - at the very least - would be in Afghan air force colours.