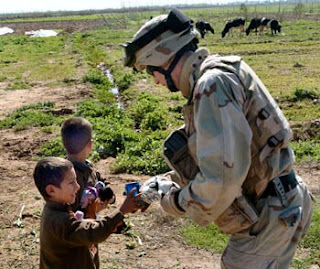 Captain Andrew Brosnan, commander of Alpha Company, 25th US Army Infantry Division, was a frustrated man. Having established his force of 140 soldiers in "firebase Ananconda" on the fringes of Uruzgan town – 100 miles north east of Kandahar – he gathered hundreds of local men in a circle around him.

Capt Brosnan then delivered a stern message. He had come to the townspeople "in friendship", he said, and outlined Alpha Company's development projects. He also appealed for information about the Taliban attacks. Despite that, he admonished, "not one person here has helped me."

Moments later, a US jet cracked across the sky in a choreographed show of force. "Together we can build a better Afghanistan," he concluded. The townsmen, listening carefully as they hunkered under the morning sun, stood up and left.

This is an account offered by The Guardian in September 2004, demonstrating, as its headline put it, "Frustrated US forces fail to win hearts and minds." Troops hunting Taleban, ran the strap, "run into wall of silence."

After a quiet welcome, the base had come under sustained attack. Suspected Taleban had fired rocket-propelled grenades at the camp three times, though most of them exploded off the perimeter wall, and planted at least ten roadside bombs designed to destroy passing US convoys.

Although the attacks had caused no serious injuries, they had infuriated Capt Brosnan. His troops, he said, had built schools, dug wells and erected latrines in the town. His medics had treated the sick and called in helicopter evacuations for patients in mortal danger. Yet, he was frustrated by "a wall of silence" about the attacks.

Even though some of the attacks had been launched from the busy town bazaar, nobody, it seemed, knew anything. "They wave, they smile. But someone out there knows what's going on - and they're not saying anything," said Specialist Melvin Krambule, a gunner atop an armour-plated Humvee.

Nearly three years later, we get a British perspective from The Daily Telegraph, which reported that, "Afghan hearts and minds refuse to be won". Troops fighting in Afghanistan, we were told, "are meeting resistance not only from the Taliban, but from the people they are there to support." 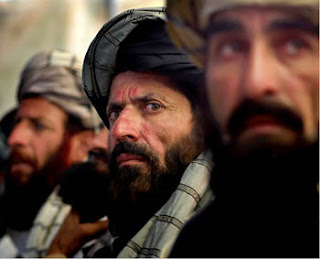 The report narrates the experience of Col Simon Marr, of the 1st Bn Fusiliers, leading a "senior Allied delegation" on a hearts-and-minds mission to the town of Ghowrak in Kandahar. He is told by the headman, Haji Pasha, "You do not need to be here in town … With your soldiers standing looking over us, watching our women and driving their vehicles destroying our land. Go into the hills to find the Taliban, don't disturb us."

Far from being enticed into repudiating the Taliban, the report adds, elders lined up to complain about the foreign troops in their midst and, more bitterly, the lack of assistance from the Afghan government. "Why are we not with you?" asks another villager rhetorically. "Why are we not thanking you for our security? Why should we do anything at all for our government when it does nothing to help us? Please do something for us but do it in Kandahar to make our government give to us not to themselves."

Militarily, control of Ghowrak is vital. It is a strategic outpost on the Hashingar Pass, a Taleban corridor to Helmand province. Fighters crossing smuggling routes travel unchallenged through Kandahar to strongholds from Helmand to Pakistan. Without troops on the ground, the military cannot hope to disrupt the Taleban's supply lines, but without the support of the local population, they cannot prevail. 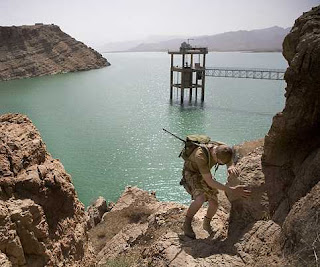 Now fast forward to June 2008 and Time magazine reports how the Taleban took away the school-books, the flour and cooking oil from Kajaki Olya. This is a village on the banks of the Helmand River in southern Afghanistan, a few miles from the strategic Kajaki dam, where works are continuing to bring electricity to 1.7 million Afghans.

But here, the writ of the Taleban prevailed. It warned the farmers of the village not to accept any other gifts from the British troops. As a result, Ghulam Madin, an opium-poppy farmer, begs the soldiers to stop coming through his village. He does not want any more food or cash, "even though his gaunt face and bare feet indicate that he needs both."

"Last time you brought us shoes as gifts, and it made big problems for us. The Taleban came and took them away," he says. "This time if we take the gifts, the Taleban will finish us for sure."

He is speaking to Major Mike Shervington, commander of a company of British troops stationed in the hills above the village. For the past few weeks, the Taliban has been following in his footsteps, stealing by night the gifts his soldiers gave out during the day.

But the villagers cannot or will not fight back. "We are afraid," says Madin. "The Taleban has force. It has power." Shervington, who leads about 200 men, asks, "More than me?" Madin shrugs. "You will come down and fight, and you will win," he concedes. "But you will win only for one hour. Then you will go back to your base. The Taleban will return."

Around the same time, the Commander, Field Army Headquarters Land Command in southern Iraq, was expressing his opinion of developments. This was Lieutenant General Graeme Lamb, who declared that, "Winning hearts and minds" in Western-occupied nations like Iraq and Afghanistan is an impossible goal.

"There will of course be circumstances where we can earn the trust of local people, where we can prevail amongst the national leadership, establish a constructive dialogue with religious authorities, but I doubt we will (be) or maybe ever have been in a position to win their hearts and minds," he said.

"To suggest that good intentions will cross fundamental cultural, social and religious differences and win over a damaged population is at best dangerous and wishful thinking. The image of winning a heart or a mind is almost ridiculous."

Lamb added that the best an occupying army could hope for was the consent of local people, and this required delivering tangible benefits like electricity, water, health, education and security. Among the locals were "some who need us, albeit for a short time, others that will accommodate us, albeit for a short time, and others that will hate us simply for all time".

While some opponents could be brought back from the brink by addressing underlying grievances, others were irreconcilable. "They are simply the architects of chaos. You have to expel them, incarcerate them or kill them."

Warming to his theme, Lamb then held: "I would contend that the (U.S.-led) coalition just being in Iraq presents to a proud and ancient civilisation abject humiliation, visible shame … Every day and in every way we outsiders are seen to be interfering in their affairs - albeit with the best possible interests, and making a difference - but nevertheless foreigners to their culture, their faith, their way of life."

The news agency report at the time noted that Lamb's comments on "hearts and minds" marked a sharp departure from what had become a cliché of counter-terrorism and counter-insurgency, often used by politicians and the media. 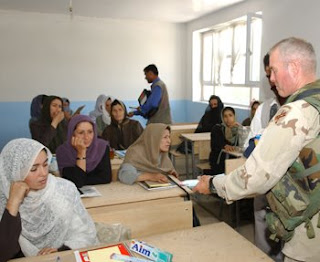 And indeed, "hearts and minds" was and still is very much a cliché, attracting the acronym "WHAM" – standing for "winning hearts and minds". This is the driver of much of the military activity in Afghanistan, where Lamb's remarks were just as applicable. Rather than involve itself in longer-term projects (although there have been exceptions) the military focuses on what are known as QIPs – quick impact projects, activities which produce an immediate dividend, supposedly to present a human face to populations in military occupied areas.

Thus, you get Capt Brosnan's schools, wells and latrines, plus food aid and gifts, when what the populations really want is longer term infrastructure projects like roads and electricity.

Worse still, as one recent study pointed out, such aid is implemented largely on the basis of a "charity paradigm", which can be perceived as "patronising, instrumentalist and unsustainable by local populations". The study adds:

Afghan populations are sceptical about military intentions, and are not fooled by simplistic material incentives designed to ‘win hearts and minds’. Crude and unsophisticated methods, such as badly designed and implemented projects to combat Taliban efforts on the non-kinetic front, to ensure force protection or to win support for the Afghan government are not currently helping build credibility or trust.

This study goes on then to advocate the use of civilian aid agencies, arguing that:

Despite force protection being one of the top priorities of commanders and a key factor inherent within the operational planning process, the military cannot establish relationships that put them in touch with the knowledge and experience that can yield in-depth insight into communities and their workings. Efforts such as patrols "engaging" with the population – by exchanging niceties with children, for example, although necessary and palliative for soldiers on the ground, are manifestly not in the same league. 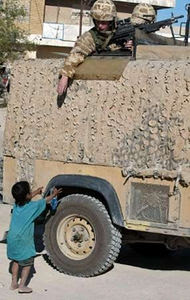 Notwithstanding that the civilian agencies are not delivering the goods either – and in their agricultural aid activities are focusing on "food security" and production improvements rather than marketing, thus exacerbating problems – the point made by Lamb is amply reinforced: the pursuit of a "hearts and minds" strategy is largely valueless.

In a hostile environment, our military struggles for the "hearts" and, in return, they get "mines". The strangest thing is that anyone ever thought it would be different. Yet, we still see arguments for the use of "Snatch" Land Rovers and open topped "WIMIK" Land Rovers – as being more conducive to the "hearts and minds" approach. We expose our troops to greater danger in the hope that the populations will reciprocate. Instead they, or the forces they support, exploit our weakness.

In that context, the watch words should be: "get in, do the job and get out" – minimising our own casualties in the process. We should leave the "nicey nicey" to the local politicians and the Afghan agencies for, if in the unlikely event that a "hearts and minds" strategy ever worked, it would undermine rather than enhance the development of the Kabul government.

This, we will explore in a later part.