The rise and fall of Gen. Dannatt 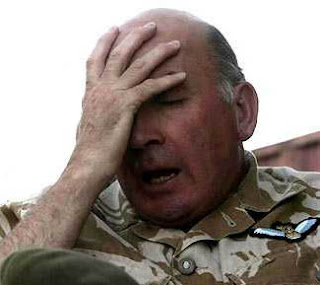 There is always a price to pay and it looks like the CGS is paying it. Mick Smith of The Sunday Times is telling us that Gordon Brown has blocked General Sir Richard Dannatt from being promoted to lead the armed forces "because of his repeated calls for better pay and conditions for servicemen."

This is from another of Smith's "senior Whitehall sources", but he's picked up enough to discover that Air Chief Marshal Sir Jock Stirrup, the current chief of the defence staff (CDS), will now have his tenure extended for a year, ensuring there is no vacancy for Dannatt before his retirement.

Another of the sources Smith cites claims: "It was Gordon’s decision … Dannatt has made a lot of enemies among the senior reaches of the Labour party," adding: "They want him gone sooner rather than later."

Actually, the decision was not taken by Brown alone, and it is not just the Labour Party which has been in despair of this turbulent CGS - a man who needed to remember that he who lives by the media also dies by it. Grandstanding brings its own rewards.

And, as Smith reminds us, Dannatt has caused problems for government from the start. Within weeks of taking over, he said that British troops needed to leave Iraq "sometime soon" because their presence was exac-erbating the situation. Although Blair publicly backed Dannatt’s comments, privately cabinet ministers were furious. "It is not his job to criticise government policy," one said. "He needs to get back in his box and shut up. His next mistake will be his last."

Dannatt was appointed CGS in August 2006, so his three-year tenure is due to expire in August next year. With Stirrup was due to leave next April, Dannatt was certainly a possible candidate for his replacement – it being the Army's turn to take up the position. Air Chief Marshal Sir Glenn Torpy is mentioned by Smith – but two RAF officers running would have upset the apple cart, especially as there is increasing sentiment that, since the Army is doing the brunt of the fighting, the next CDS appointment should reflect that.

Admiral Sir Jonathon Band, the first sea lord, was also a possibility but, after the debacle of the Iranian hostages his star is definitely on the wane.

However, it seems that Stirrup – who is currently the only one of the chiefs with counterinsurgency experience – has been asked to stay on so that all the current service chiefs have been replaced by the time he has finished his term.

A "senior army officer," cited by Smith, observes: "By cleaning house and putting a new team under Stirrup, the PM gets a new group of senior officers who will be too busy trying to climb the greasy pole to rock the boat."

That is a somewhat ungenerous construction. Professionally, some regard Dannatt as a disappointment and his grasp of the very particular needs of counterinsurgency operations has not been that evident. Instead, we have seen strong advocacy for the FRES programme. Very little in the way of innovation has come from his office.

Thus, as have Robert Gates and Gen. Petreus been cleaning out the stables of the DoD and US Army – replacing some of the obstacles to progress to developing effective COIN tactics - so too would the British military establishment benefit from a clean sweep, starting at the top.

One possible replacement slated for Dannatt is General Sir David Richards, veteran of Northern Ireland, East Timor, Sierra Leone and Afghanistan – someone less inclined to be mesmerised by shiny toys and more in tune with the realities of actual warfare than the mythical "future wars" with which Dannatt seems to be obsessed.

How he will then get on with a future Conservative government is, of course, another matter.