Winning the war – Part VII: The only priority? 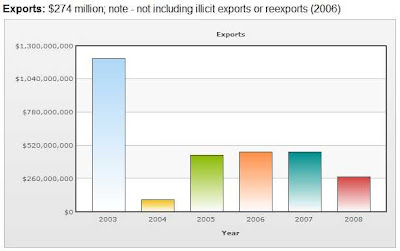 As one researches further into this issue, in what has become a journey of discovery, one meets the constant refrain from diverse sources that, "there is no military solution".

Whimsically, however, we could find ourselves disagreeing. The military - for the moment at least – should suspend their battle against the Taleban and other "anti-government elements". Instead, they should turn their guns on the ranks of foreign NGO personnel, government aid agencies and other "hangers on", and drive them out of the country. If necessary, they should shoot some of them, pour encourager les autres to expedite their departure. That alone would do probably more to promote the cause of peace, and the prosperity of the Afghani people than other activity one could possibly imagine.

More particularly, one would send a large military detachment to Brussels where they would be tasked, selectively – or indiscriminately, it matters not – to slaughter EU commission officials responsible for formulating trade policy. When they have finished there, they could, with advantage, turn their attentions to the US Congress.

Unfortunately, such diversions – while undoubtedly entertaining – would be unlikely to gain approval. In any event – given the complexity of modern government and the labyrinthine diffusion of responsibility – they probably would not work.

However, while the sentiment is whimsical, there is a serious point behind it – illustrated by the chart published at the head of this part. This shows that (legal) Afghani exports, from $1.3 billion in 2003 – modest enough then – have collapsed to a mere $247 million (estimated) for 2008. More authoritative figures show that exports as a proportion of GDP have declined from 42.7 percent in 2003 to 25.6 percent in 2006, confirming the trend shown in the graph.

As far as the European Union goes, one sees great enthusiasm for insisting on a "broad-based, gender-sensitive, multi-ethnic and fully representative government", when it comes to trade agreements, one sees the damning words, "There are as yet no sectoral agreements (trade …) between the EU and Afghanistan." As regards trade volumes, one then sees:

Afghanistan is entitled to benefits under the General System of Preferences (GSP) and the Everything But Arms Initiative (EBA). However, in spite of this favourable treatment, trade volume from Afghanistan to the EU has remained limited, actual trade remains minimal: EU imports from Afghanistan in 2005 were €26 million and exports were €321 million.

Afghanistan is entitled to benefits under the Everything But Arms Initiative (EBA) of the Generalised System of Preferences (GSP). Trade between the EU and Afghanistan has almost tripled between 2002 and 2006 but overall remains small. EU imports from Afghanistan increased from €19 million in 2002 to €36 million in 2006. Exports during that period increased from €133 million to €418 million. Whilst the EU is Afghanistan's second most important trading partner after Pakistan, Afghanistan ranks only 129th as regards the EU's major trading partners. 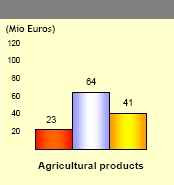 These broad figures, though, conceal an even more dire position when it comes to agriculture. Reference the chart (illustrated right), we can see that in 2006 – the latest official figures available, the EU 25 imported a mere €23 million-worth of agricultural products from Afghanistan, yet exported €64 million-worth to the country, leaving it with a balance of trade deficit of €41 million.

Now, if this seems to be digressing from the military campaign, bear with me. We turn to Barnett R. Rubin who is Director of Studies and Senior Fellow at the Center on International Cooperation (CIC) of New York University, where he directs the Afghanistan Reconstruction Program. Having made a clear link between the counter-narcotics programme and the continuation of the insurgency – the one fuelling the other – he argues in his own blog that there is no military or even law enforcement solution to the drug economy in Afghanistan. He then writes:

This is the result on the ground of a one-dimensional military policy. All we hear is, not enough troops, send more troops. Then you send in troops with no capacity for assistance, no capacity for development, no capacity for aid, no capacity for governance, and you get a lot of head scratching. Of course now there is nothing they can do. Because they think it is a military problem, they send in the Marines during the fighting season, which is also the harvest season. Why didn't they send them in during the planting season with development aid? Because they don't know about planting and harvesting, or at least they have no idea how to integrate these very basic political and economic considerations into their planning.

If they attack the farmers of course they will lose control of the area. They should try to co-opt as many of the local small traffickers as possible to keep them from selling to the Taliban (believe me, the local administration knows who they are) and then launch a big aid program for next year.

After all this time, they still have no idea what they are doing.

In a comprehensive report, he then states:

Alternative development for counter-narcotics must start from macroeconomic plans to create employment by linking Afghanistan to licit international markets, especially through rural industries based on agricultural products.

There we have it: the theme we have addressed in previous parts of this dissertation – the way to salvation is through international trade. Although the Lashkar Gah "miracle" worked when good access to a local market allowed farmers to diversify into higher value produce – leading to an abrupt halt in poppy cultivation – in many areas, this equation does not work. The problem is, amongst other things, that the local populations lack the purchasing power to buy more expensive products. In order to grow them and then to gain the economic benefits from them, farmers must have access to export markets. Europe, with its high purchasing power, is an obvious outlet, but the trade, as we have seen, is minuscule. 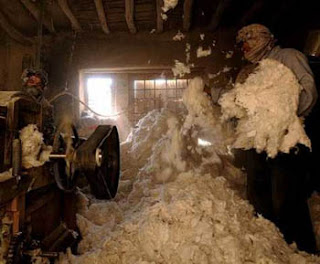 Returning to Rubin's report, we then find that the original cash crop produced in the irrigated areas of Helmand, before the Soviet invasion, when Afghanistan had a healthy export trade – was cotton (pictured).

But, we are told, that crop is not competitive with opium poppy as long as US and European Union producers drive down the price by dumping subsidised cotton on the international market. And, although estimates of the price impact of these subsidies vary, Rubin notes that total US cotton subsidies total over $3 billion yearly, more than total US development aid to Afghanistan.

Even then, if the US and EU subsidies cannot be eliminated due to pressure from domestic political constituencies, there is an alternative. Subsidies could still be provided in Afghanistan. However, under pressure from the World Bank and others, the Afghan government is required to adopt the very "free market" principles which its benefactors reject. Therefore, Helmand farmers who have asked for government cotton subsidies as an incentive to shift from poppy to cotton, have been told they do not qualify for exemptions from the discipline of the "free" market. 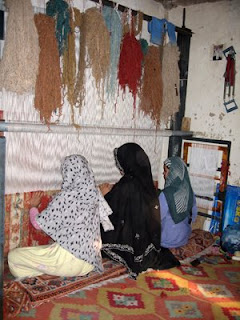 Still, there is another alternative. Even if cotton alone is not competitive, it has been suggested that textile and garment production would be competitive. Rubin writes that establishing textile quotas for Afghanistan in major markets and investing in simple garment factories in Afghan cotton-producing areas could increase employment. The appeal of a certified "Made in Afghanistan" (or "Made in Afghanistan by Afghan women") label could offset the increased costs of production and transport. Similar opportunities exist with carpet production (pictured). Yet, progress there has been none.

Then, should subsidies prove impractical under Afghan conditions, Rubin adds, another approach is to expand local procurement by the international community in Afghanistan combined with attempts to encourage contract growing of high value horticulture. Again, progress there has been none.

And it gets worse. To soak up labour displaced by the transition from opium production to the licit economy, there is a desperate need to create rural industries (needed as well to halt the population drift into the cities), but – in order to thrive, these must be linked to regional and global markets with assured access to those markets.

Still, it gets worse. The US State Department is soliciting proposals under their new Economic Empowerment in Strategic Regions (EESR) programme to provide alternative income generation for farmers in south western Afghanistan through production and processing of agricultural fibres, oilseeds, and feed products.

But USAID reportedly refuses to fund such initiatives on the grounds that they conflict with the Bumpers Amendment. "Until there is an official declaration of Administration policy regarding the amendment, those qualified to submit proposals will be reluctant to do so," Rubin writes.

Explained here, the Bumpers Amendment was a measure passed by the US Congress in May 1986 controlling the distribution of foreign aid by US authorities. It stipulates that "none of the funds to be appropriated … may be available for any testing or breeding, feasibility study, variety improvement or introduction, consultancy, publication, or training in connection with the growth or production in a foreign country for export if such export would compete in world markets with a similar commodity grown or produced in the United States."

Nor is this by any means an academic issue. Reported in February 2008 was the fate of two Afghan-American brothers, Yosuf and Abdul Mir, with a textiles factory in Kandahar.

In 2005, they developed a plan to renovate the factory, on the basis that it could give opium farmers an incentive switch to growing cotton. Arguing that they could provide as many as 18,000 jobs, as well as a guaranteed cotton and wool market for local farmers, they won the support of the Afghan government and got more than 2,000 farmers to sign pledges agreeing to switch from opium to cotton.

Then the put their case to USAID officials for a $1.5 million grant for their project, under the alternative livelihoods programme, and got what they believed was a tentative agreement in 2006 from Chemonics International, a Washington-based company that administered USAID projects in Afghanistan.

A year later though, in June 2007, Chemonics rejected the project without explanation. A letter in October from the head of the State Department's Office of Afghanistan, John Fox, then said the refusal was prompted by a congressional ban on funding projects that would compete with US farmers. That was the Bumpers Amendment in practice.

All of a sudden, the carefully structured argument about the military making development activities their priority – the only priority – come screeching to a halt as they crash into the political realities of government aid and protectionism. Yet, in Part III, we asserted that "any military activity must be closely integrated with, and responsive to, a cocktail of high policy, other agency activities and government actions."

By the same token, "high policy, other agency activities and government actions" must be closely integrated with, and responsive to military activities and needs. What we are learning from this journey of discovery is that they are not. In fact, so far do they deviate from what is absolutely necessary, the indications are that, whatever they do – short of the action proposed at the beginning of this post - the military are unlikely to succeed.

We are going to have to go away and think about this … it does not look good.