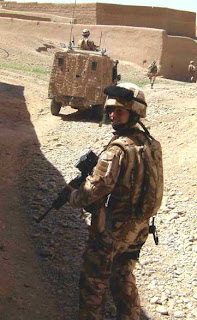 A report by The Guardian has the government defending the continued use of "Snatch" Land Rovers in Afghanistan.

This is taken from the Defence procurement debate this morning (link to follow) where the "Snatch" came under heavy criticism for its lack of protection against roadside bombs, and armed forces minister Bob Ainsworth defended the vehicle.

The alternative, better protected vehicles like Mastiff could not go to certain places or do certain things. Even the Ridgeback, which will be "will be more capable than Mastiff - smaller and able to go to places that Mastiff cannot - will be considerably larger than a Land Rover-based vehicle." Thus, commanders, he said, needed a range of vehicles for different terrain and operations.

"Whether or not we are going to be able to take away these small platforms without taking away a whole area of capability is something that will need to be thought of very seriously," he added.

The Daily Telegraph, however, also runs a story, but its headline signals a different focus, with: "Fears of more Afghanistan deaths as 'inadequate' vehicle blamed for latest fatalities."

Defence correspondent Thomas Harding tells us that "more soldiers could die unnecessarily in Afghanistan because replacements for their 'totally inadequate' vehicles will not be ready for months", noting that the "Snatch" has been withdrawn from use in Iraq because it offers so little protection against mines.

He goes on to write that campaigners are saying that Cpl Sarah Bryant, 26 (pictured above), of the Intelligence Corps, and special forces soldiers Cpl Sean Robert Reeve, 28, L/cpl Richard Larkin, 39, and Paul Stout, 31 – the four who were killed in this latest outrage - would still be alive if they had been in an armoured vehicle.

Cited is Rose Gentle, a founding member of Military Families Against the War, whose 19-year-old son Gordon died in Iraq. She says: "How many more deaths are we going to have? The public are sick of turning the television on to hear more soldiers have been killed for not having the right equipment."

Sue Smith, whose son Phillip Hewett was killed in a "Snatch" in Iraq, said: "I don't understand why they didn't see this coming. We still haven't learnt from Iraq. "When Phillip died three years ago we knew then that Snatch was no good but we have still continued to use them." 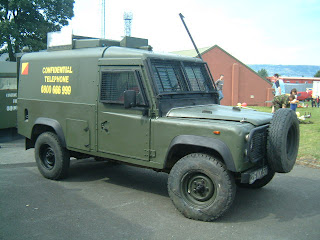 Also cited is Patrick Mercer, who intervened heavily in procurement debate – where he recommended the much wider use of helicopters to transport troops and carry out routine patrols. His view of the "Snatch" was that it was simply "packaging our troops as compact targets". Colonel Tim Collins also comes in, declaring: "It is now either a question that we stop patrolling because we don't have the right vehicles or we take a chance."

The MoD we are then told, has justified the use of "Snatch" in Afghanistan by saying that the threat from roadside bombs there was not as sophisticated as in the Iran-sponsored insurgency in Iraq, but Harding then adds that there are already a number of armoured vehicles being used by other countries that are far superior to the "Snatch".

The Americans and Canadian forces, for instance, are equipped with South African made RG31 mine protection vehicle that can withstand a blast of 14 kilos under a wheel, the equivalent of two large mines.

Finally, of the citations, this blog author says that the: "Snatch was never designed to deal with counter-insurgency where the threat is from mines and bombs. It is totally inadequate for that purpose."

Part of the problem, according to Harding is that the vast majority of the Army's armoured vehicles, including its entire fleet of Bulldog armoured personnel carriers and the Ridgeback is not due in service for some months. But even than, an MoD spokesman counters saying that whilst safety was the "prime concern" in operations, sometimes the "agility and low profile" of 'Snatch' meant it was the most suitable vehicle available.

Here, the anonymous spokesman is being a tad disingenuous, as indeed was Ainsworth, when he told MPs that both the Mastiff and the Ridgeback were too big for some functions. We are back, after all this time, to the “too big for Basra” argument, transferred to a new locale. 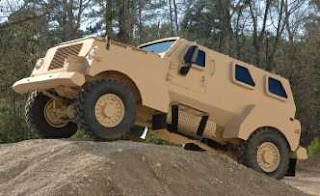 When it comes to these two vehicles, these after all were the choice of the MoD – and they alone selected what must be two of the largest MRAP vehicles available. The RG31 – selected by the US and Canadian forces, is a smaller vehicle, and widely used by both for routine patrols. And, for something even smaller, there is the Force Protection Cheetah, a purpose-built protected patrol vehicle – a mere half an inch wider than the HUMVEE.

Ironically, this six-seat vehicle has been considered by the MoD for the protected patrol vehicle programme and rejected. Only after questioning by Ann Winterton (here and here) did it emerge that the capacity was considered insufficient.

Thus, we have a situation where the MoD insists that its existing protected vehicles are too large for some functions. This thus justifies the use of "Snatch" Land Rovers, but then rejects a smaller vehicle on the basis that it is, effectively, er … too small – even though its capacity is greater than the Land Rover.

Somewhere there has to be some logic in this although we have to admit that we are having a little difficulty discovering where.